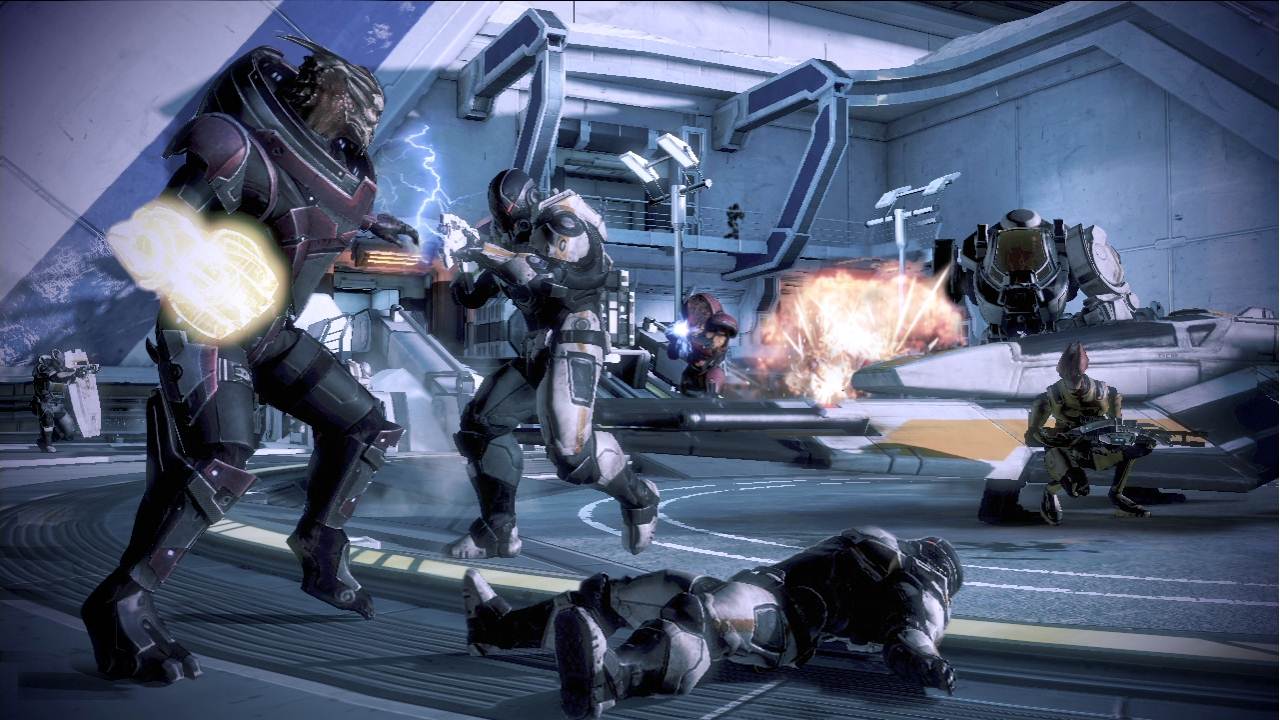 Finally we now have the official details on the multiplayer in Mass Effect 3. You will be able to play with up to four people in co-op in what they are calling the Mass Effect 3: Galaxy at War System.  In four player co-op you are put in the role of a team of elite Special Forces soldiers where you have to protect resources and assets from the Reapers that will help win the battles against them. You will be able to choose to play as six different classes/races which are Human, Krogan, Asari, Drell, Salarian and Turian.

This will give you benefits in your campaign depending on what you do in which component.  In order to have this system though you will need the Online Pass which comes with every new copy of Mass Effect 3 or can be purchased.  The system will also keep players connected to their BioWare Social Network accounts.  Mass Effect 3 will be out on March 9th, 2012, for the Xbox 360, Playstation 3 and PC.  Full press release below.

EDMONTON, Alberta–(BUSINESS WIRE)– Earth has been captured, the galaxy is on the verge of total extinction, and it’s up to you as Commander Shepard to assemble the counter offensive and take Earth back. Award-winning developer BioWare, a label of Electronic Arts Inc. (NASDAQ:ERTS), announced today that multiplayer will be coming to the critically-acclaimed Mass Effect™ series for the very first time as part of the new Mass Effect 3: Galaxy at War system. With the Mass Effect 3: Galaxy at War system, players will fight for the survival of the galaxy against an ancient alien race known only as, Reapers, in both the single player campaign and through a suite of Mass Effect games and applications. Progress made in each of the components of the system, including the new multiplayer mode, will directly link back to the player’s main campaign, helping Commander Shepard rally the forces of the galaxy to eliminate the Reaper threat once and for all. The Mass Effect 3: Galaxy at War feature can be activated via the Online Pass code found in every new copy of Mass Effect 3. The Mass Effect 3Online Pass can also be purchased separately on the Xbox 360® videogame and entertainment system and PlayStation®3 computer entertainment system.

“The theme of galactic war in Mass Effect 3 presents us with the perfect opportunity to introduce multiplayer into the Mass Effect series,” said Casey Hudson, Executive Producer of the Mass Effect series. “Multiplayer not only features amazing combat and deep customization options, but it will give players another way to help the war effort against the Reapers in the main event — the single player campaign.”

Featuring four-player cooperative gameplay, multiplayer in Mass Effect 3 puts players in the role of a team of elite Special Forces soldiers sent to protect resources and assets that can help the war effort against the Reapers. Players will have the option of playing as one of six classes and from six different races: Human, Krogan, Asari, Drell, Salarian and Turian.

Multiplayer and other components of the Mass Effect 3: Galaxy at War system provide alternative ways for players to wage the final war against the Reapers. The new system will also connect players to their BioWare Social Network accounts to stay up to date on the latest Mass Effect 3 news and access downloadable content (DLC) and add-ons.

The Mass Effect franchise is one of the most highly decorated series in the history of games, having earned over 200 awards worldwide. Mass Effect 3 arrives on the Xbox 360® videogame and entertainment system, PlayStation®3 computer entertainment system and PC in North America on March 6, 2012 and in Europe on March 9, 2012. For more information on Mass Effect 3, please visit http://masseffect.com, follow the game on Twitter at http://twitter.com/masseffect or “like” the game on Facebook at http://facebook.com/masseffect.

In 2008, BioWare was acquired by Electronic Arts, a leading global interactive entertainment publisher. In 2011 EA created the BioWare Label, alongside EA Games, EA SPORTS™ and EA Play. For more information on BioWare, visit www.bioware.com, or follow us on Twitter at www.twitter.com/biofeed. To join the millions of fans already registered with the BioWare community, go to http://social.bioware.com.

BioWare, Mass Effect, Jade Empire, and Dragon Age are trademarks of EA International (Studio and Publishing) Ltd. Battlefield 3 is a trademark of EA Digital Illusions CE AB. EA SPORTS, The Sims and Need for Speed are trademarks of Electronic Arts Inc. John Madden, NFL and FIFA are the property of their respective owners and used with permission. “PlayStation” is a registered trademark of Sony Computer Entertainment Inc. Xbox and Xbox 360 are trademarks of the Microsoft group of companies and are used under license from Microsoft. All other trademarks are the property of their respective owners.