“Tendrils” was the key word here.

Platinum Games’ developer blog recently posted some new concept art showing the design evolution of one of the game’s characters, Mistral. Mistral is a very interesting woman – namely because she uses a ton of Gekko arms to fight as a sort of Kali-esque demeanour or can just attach them all together as an elongated whip. 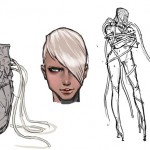 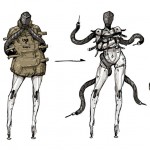 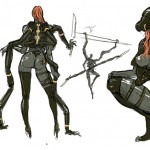 The artist behind Mistral, Cho, stated, “Mistral’s initial concept came from Kenji Saito, Rising’s director: “I want tendril-like-objects to come out of this girl, and I want her to fight with them like a whip!” In previous MG titles, most female characters follow the formula of a mysterious, alluring femme fatale with a tragic past. I wanted to design Mistral in the same mold.

“Then we put about a dozen dwarf gekko arms on her that she could detach and recombine to create her main weapon. After this was approved, we finally had Mistral’s prototype. Next, we did some fine tuning by iterating on colors and cyborg parts. Personally, I wanted Mistral to be wearing a helmet, but Saito-san said he didn’t want to hide her face, so we lost it. The final design we decided on was a more “human,” sexy Mistral.”

Metal Gear Rising: Revengeance is currently set to arrive for PS3 and Xbox 360 on February 19th in North America.