Check out the prologue running on all platforms.

Metal Gear Solid 5: Ground Zeroes and The Phantom Pain director Hideo Kojima recently tweeted two illustrations from an upcoming novelization that will be including in the Special Edition package of the prologue. You can check them out below. You can also check out all four versions of the game running below.

“Here’s a sample of the Peace Walker‘s novelization book included in one of the special editions of Ground Zeroes. It’s lavishly illustrated by Shin-chan (Koji Shinkawa) in color. That way those that don’t like text-only novels will also enjoy reading it.

“The luxurious illustrations will also appear in a spread in this way. It’ll be like Hayakawa SF from a long time ago (laughs).”

Meanwhile, Metal Gear Solid 5: Ground Zeroes is slated to release on the Xbox One, Xbox 360, PS3 and PS4 on March 18th in North America and March 20th in Europe. The Phantom Pain will be arriving either by the end of 2014 or in 2015, depending on the success of Ground Zeroes. 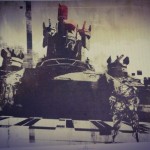 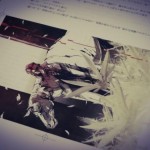