Codemasters talks about the return of its tiny racer.

For all the amazing racing sims that Codemasters has released, there’s one series that’s been primed for a comeback. We’re talking about Micro Machines, the not-so-serious racer taking place on a tinier scale. It’s been a while since the franchise had a sequel which is why Codemasters announcement of Micro Machines World Series is so significant.

GamingBolt spoke to Codemasters product manager Matthew Beckett to learn more about the game, what’s changing this time around and why you should be excited for World Series. 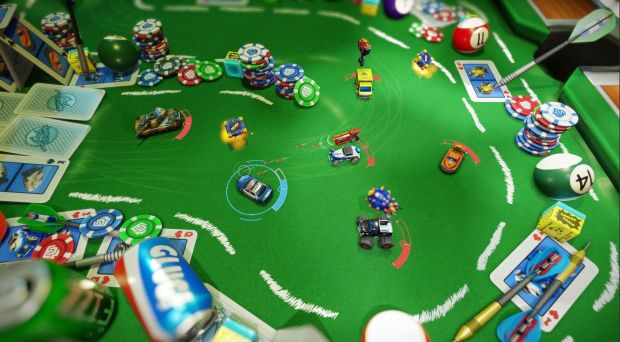 "On our forums, it has long been the game our players wanted us to bring back above all other titles!"

Though many know Codemasters for F1, Dirt and other racing titles, the Micro Machines franchise has been established since the SNES days (and saw a successful free to play iteration recently). What motivated you to return to the franchise with a full-fledged sequel on consoles and PC?

The fans! No matter where we go, or who we talk to, over and over again we hear the same question: “When are you going to make a new Micro Machines game?” When people visit the studio and we ask them what they know about Codemasters, almost everybody at some point brings up Micro Machines, and how it was one of their formative game experiences.

On our forums, it has long been the game our players wanted us to bring back above all other titles! So after dipping our toes in the water with a couple of other titles, we’re really excited to be finally bringing Micro Machines racing back to the mainstream console audience, whilst also adding brand new styles of gameplay that will thrill the fans !

Arcade racing titles are still incredibly popular this generation. What is the most appealing thing about World Series for fans new to the series?

It’s no surprise that arcade racing remains popular – and Micro Machines World Series brings together the best elements of that category. Accessible, social, multiplayer and above all, fun! If you’re new to Micro Machines, the most appealing thing is going to be just how easy it is to get into the game. There’s a lot of depth for returning players, and a lot for players to master over time, but the new team battles mean that anybody can dive in and contribute

How many cars and tracks can we look forward to in World Series?

Unlike previous games in the series, where the cars were all fundamentally similar, in this game the 12 cars are the stars! Each one a distinct personality, with its own unique load out of weapons and abilities. That means each vehicle offers an entirely different play style, so there’s plenty to get your teeth into. 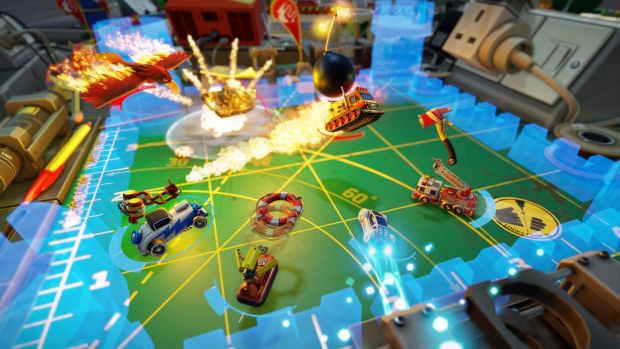 "The battle arenas let us mix the gameplay up and offer players a much bigger variety of game experiences, all centered around how cool it is to be playing with these miniature motors."

The game also offers 10 race tracks, 15 of the new team battle arenas and 5 smaller Deathmatch arenas used in the local multiplayer battles. Players who remember the original games will recognize some of the locations in-game – the classics such as the pool table and the kitchen are back – whilst there are new locations such as the garden, workshop or battling in arenas such as Hungry Hungry Hippos!

What unique skills, classes, etc. will each vehicle possess?

Each vehicle has access to a primary weapon (such as a machine gun, or laser) that can be used pretty much at will, alongside a pair of abilities that offer more powerful effects – but on a cooldown, meaning they have to be deployed tactically for best effect. Examples of these include Agent Atom’s Flashbang, which disorients and slows all enemies onscreen, or Lt. Shield’s Police Siren that grants all your nearby allies a damage reduction buff for the duration of the effect (plus it goes “NEE NAW NEE NAW” and lights everybody up in red and blue, which pleases the 5-year old in all of us no end).

Damaging and destroying enemy vehicles also helps build your ultimate ability’s charge meter, which when full lets you unleash the game’s most powerful and destructive abilities! Spin Hank N. Stein’s monster truck up into a screen-eclipsing tornado, or use Dr. Mel Practice’s ambulance to resurrect your fallen allies and push home the attack!

What can you tell us about the Battle Arenas and how much they add on top of the traditional racing experience?

The battle arenas let us mix the gameplay up and offer players a much bigger variety of game experiences, all centered around how cool it is to be playing with these miniature motors. While racing – even across multiple race modes – tends to centre on a single concept (go as fast as you can!), battles let us offer a wider variety of goals. Attack a position, defend a position, escort a moving target, manage a strategy over multiple locations – these all play out quite differently, and require players to think differently, and are all offered across the range of battle modes offered at launch: Capture the Flag, King of the Hill and Bomb Delivery.

A team battle also offers a whole extra layer of play to experience and master: how do you coordinate as a team? Do you want to use the in-game emotes, or form a group and use full voice chat? Or just play it by ear? How does your team pick its cars? Which cars can you pick in order to build interesting synergies, or to counter whatever the enemy team is doing?

All these different factors working together, means there’s always something new around the corner – something we capitalize on with the weekly Special Events, which pop up every weekend and offer players a fun tweak on the normal game rules for a particular mode. 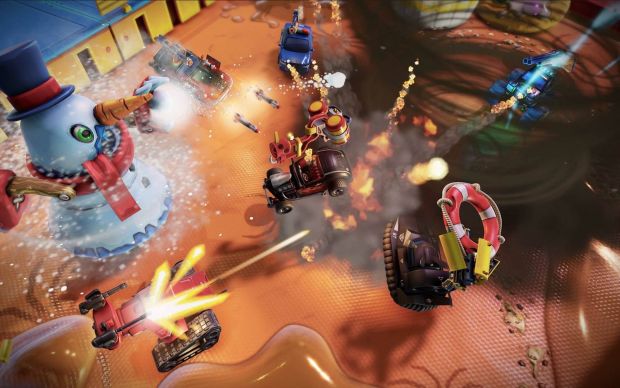 "Micro Machines has always been a multiplayer institution, and we’ve chosen to spend as much of our resources as we can on developing that experience for players."

How do you go about balancing vehicles for the Battle Arenas?

Lots and lots of play, and lots and lots of feedback! We’re constantly playing the game in the studio, and every match nets us feedback that we feed back into the process. That feedback goes to our design team, who pick out the common threads and then discuss the changes we’d like to try in our next session. We have to be very careful not to let personal favoritism get in the way! We also keep stats that let us compare the vehicles on a more mechanical level (e.g. average time to kill with the primary weapon). But it’s important to us that the game feel right – those stats are a place to start from, not an end in and of themselves.

Will there be a full-fledged single-player mode for solo fans?

Micro Machines has always been a multiplayer institution, and we’ve chosen to spend as much of our resources as we can on developing that experience for players. That said, if players are looking to play on their own, offline, the Skirmish mode (our local multiplayer mode) can be played as easily with 1 player as it can with 2, 3 or 4.

AI bots can be called into service (fans of the series will recognize old favourites such as Cherry, Spider, Dwayne and Jethro!), playing modes such as Race, Elimination (the sofa play classic!) and Deathmatch. Micro Machines World Series will really satisfy that desire for a social, offline, multiplayer experience that is fun – and Elimination mode does precisely that.

What kind of post-launch updates can we expect for Micro Machines: World Series?

Nothing we can announce just yet! But let’s just say that anyone who plays the game can see that it’s been structured in such a way as to offer us a lot of opportunities to build out from launch in interesting ways.