And both are apparently far ahead of Nintendo. 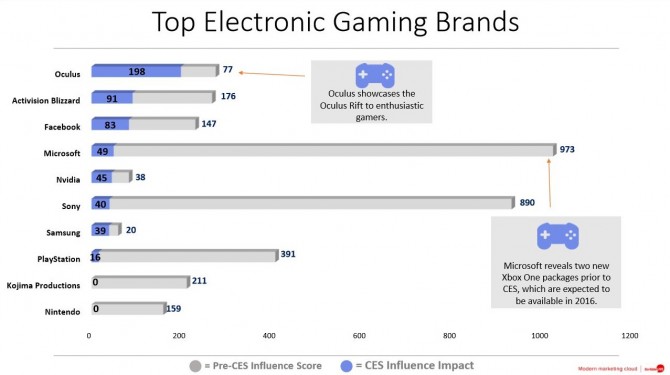 While PlayStation and Nintendo are far older, more entrenched gaming brands than Microsoft, having multiple decades of history, and iconic hardware and software under their belt, it appears that in the immediate here and now, Microsoft is far more at the forefront of gamers’ minds than either of them. A study conducted by marketing firm ScribbleLive over CES seems to confirm as much.

Speaking of their study and the methodology behind it, ScribbleLive said “The ScribbleLive Insights application analyzed over 100 million articles from news, blog and social media sources to identify opinions from and reactions to the various product categories, people and brands featured at the event. Insights calculated a proprietary influence score (the “attention index”) based on the people or entities that reacted to an announcement. This was weighted by their influence on a given theme, the credibility of the outlet where the reaction was published or consumed, and the volume of reactions generated by the opinions within the studied timeframe of January 1-8, 2016.”

The results are truly surprising- Microsoft leads over Sony by a fair bit (though it is important to note that PlayStation has its own discrete category, which when combined with Sony, would gain a healthy lead over Microsoft- Xbox has no such distinct category). Amusingly enough, Oculus seems to be more influential than either of those.

Of course, what with this study being conducted at CES, a technology show, and seemingly being conducted in a very short timeframe, the results are bound to be biased in favor of companies with more technology heavy showings (which would explain why Nintendo doesn’t score highly here- they didn’t have any presence at CES, while Sony’s presence was mostly not related to their gaming products).

Still, it makes for some interesting insight, that is for sure.