After the opening of the brand new Fable forums at Lionhead studios, a forum member by the name of Curse of Scorn has found an image that apparently shows some of the unannounced Xbox One that will be revealed at Micrsoft’s press conference including the confirmation of Fable IV. Check this forum thread for the source. 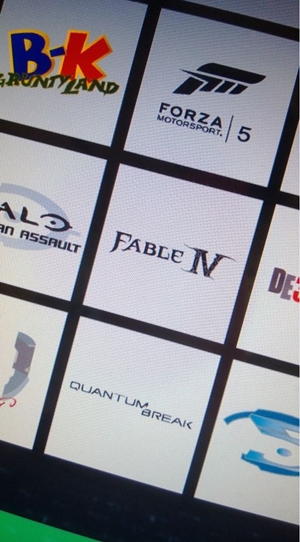 In the image above we can see the following titles:

Middle Right: Hard to tell due to letters being cut of but could be Dead Rising 3 or something to do with Zombies.

Bottom Left: Can’t tell because we can only see a piece of the symbol.

Bottom Right: Halo 5 and that is a no-brainer since 343 studios was already hard at work for next-generation Halo.

We will be attending Microsoft’s press conference and will be posting full impressions of what I’ve seen of the games and the console itself.

Let us know if any of these games excite you in the comments below.

Check back on GamingBolt on June 10th for the E3 coverage and more updates on daily basis.

Update: Halo: Spartan Assault has been officially announced, along with the official logo of the game. Of course, it doesn’t match with the logo shown in the above pic, but it’s fully possible that the above logo is old while this is new. As always, take the above “leak” with a grain of salt and wait till E3 2013 before getting your hopes up.