Could the machines be rising up soon?

The first DLC character for Mortal Kombat 11 is out today, the returning Shang Tsung. He was revealed along with most of the others in the game’s Kombat Pack. Two “guest” characters were left for later, and it’s possible one of them has been spoiled a little early.

Spotted by some eagle eyed posters on the official Mortal Kombat Discord, a Google ad may have gone live a tad early, revealing the next guest character- none other than The Terminator (who has been popping up a lot in games lately). Of course, for now this has to go into the rumor pile, but it’s not the first time an early Google ad has spoiled a fighter reveal.

It’s also worth mentioning that Terminator was mentioned in a datamine leak of the Switch version of the game shortly before release, along with Ash Williams from the Evil Dead franchise (though Bruce Campbell is still denying that one). Could the futuristic killing machine be coming to rip out some spines? Only time will tell.

Mortal Kombat 11 is available now for PlayStation 4, Xbox One, Switch, and PC. 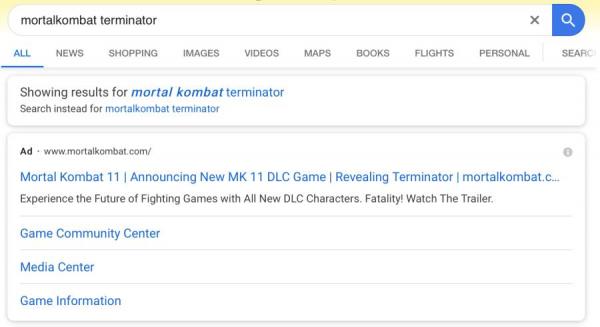