When it comes to motion controlled games, the majority are some kind of take on the party formula. When Move Mind Benders popped through my door, I imagined it would some kind of psychic influenced party rubbish, like bending spoons with the Move wand so all the family could join in. They don’t mean mind bending as in bending stuff with your mind though, they mean puzzles. Imagine my surprise then when MMB offered up two of the games demoed on the PS Move starter disc and the classic Lemmings with motion control support. The games themselves are all top notch puzzlers, but the motion controls don’t always work as planned, and the slow pace of the three games won’t be everyone’s cup of tea. 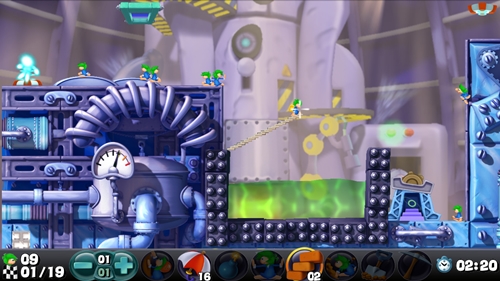 Lemmings has a classic feel, but it isn’t always at home in a modern gaming climate

The first of the three games is the classic Lemmings. For those lacking in the more classical nuances of gaming culture, Lemmings sees players guiding their little Lemmings through various 2D landscapes. The Lemmings move forward endlessly of their own volition, often jumping straight off cliffs unless you equip them with various tools to help them climb, dig and glide their way out of trouble.

The version here is as classic as it has always been, but it isn’t the best port of Lemmings out there. It certainly nails the classic tone of Lemmings, with colourful graphics and vivid animations bringing the helpless green-haired humanoids to life. It offers a fair few levels to go through and, though the game can be frustrating at times, it will offer a fair amount of content in spite of the fact that it lacks the level editor seen in other Lemmings games.

The big pull of this version is the ability to use the Move controller to herd your helpless friends. It works reasonably well, but it just isn’t as stable and accurate as you would like at times. The option is there to use a normal controller if that suits you better, but neither control method matches up to the mouse and keyboard of old. Motion controls offer a nice way to make the game more accessible, but the lack of hot keys to quickly cycle through Lemming equipment makes it feel too slow to be truly effective. The goal you need to reach in some of the levels can also be unclear, and a very poor tutorial likewise conspires to often make it a trial and error sort of game, something that doesn’t sit well in a modern gaming climate. That said, it’s retro, good fun and a decent start to Move Mind Benders in spite of a few hiccups here and there. 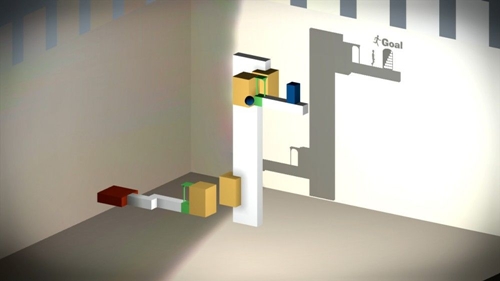 Echocrome is unique and brilliant, but could’ve done with a hot seat mode

Next up in the package is the unique Echocrome 2. The original game used M.C. Escher style optical illusions to create a unique puzzle game, and its sequel goes for a similar mechanic that now incorporates the Playstation Move. Your Move wand controls a light source that shines on a variety of blocks suspended in the air. You must then guide a shadow man through the paths created in the blocks’ shadows. It sounds complex, but works undeniably well in practice. Getting the right perspective can create a variety of stairs, trampolines and arch transports to guide your shadow man to safety. It’s clever, simple and highly relaxing, pretty much all the prerequisites for a good puzzle game.

There are a fair few levels on offer, all of which sport an intricate and well thought out design. Echocrome 2 offers the most content of all three games on disc though, largely due to its robust level editor. You can even share your creations and replays online and download and rate what other members of the Echocrome community have to share. It’s fun being able to see how you match up to other people’s replays, but a local multiplayer or hot seat mode would have been welcome as well.

Each level can be played in two alternate modes for those not content with the usual Escort mode. Echoes requires you to pick up a number of shadow men placed across the level, and Paint sees you using multiple shadow men to paint the blocks in different colours. These modes add a certain longevity to the game, but they lack variety and aren’t at all as strong as the normal Escort mode. Echocrome 2 can often have a very slow pace that some players will be frustrated by, a matter not helped by the game’s laboured tutorials, but its excellent music and graphics offer a slice of relaxing puzzle gaming that will tax your mind in many creative and inspired ways.

The simplest, but arguably most refreshing title in Move Mind Benders is the aptly named Tumble. Imagine a Jenga style game where you use the Move wand to build structures out of pre-set blocks. Some levels task you with building as tall a tower as possible, others need you to build a structure using as many odd shaped pieces as you can, and one mode sees you destroying pre-built towers with mines. This destruction mode sounds good on paper, but feels unfortunately flat in practice. The other modes generally stick close to the core theme of the game, but this is by no means a bad thing. The different block shapes and materials offer enough variety to make basic tower building a fun and addictive experience, and the Move control feels solid and robust for the most part. 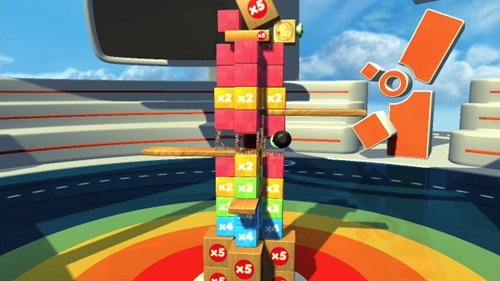 Placing your blocks with the Move controller is a joy in general, though there are occasional problems with depth perception. Helpful markers show where your block will land on screen, but it can still be a problem to get that sense of depth. Maybe a sequel in stereoscopic 3D would rectify the problem? Regardless of these mild set backs, Tumble offers fun core mechanics, a decent amount of levels and some cool multiplayer and hot seat modes.

All in all, Move Mind Benders is a great way to experience some fantastic puzzle games using Sony’s new motion control hardware. The actual implementation of the Move is occasionally questionable, but the games on offer are solid slices of puzzling genius. The issue comes in the general pace of the puzzle genre, as the three games on offer certainly will not be to everyone’s taste. That said, if you fancy taxing the old grey matter, Move Mind Benders is a satisfying and well priced way to do it.

All the games are good, A good mix of the classic Lemmings and newer games, Move controls are often refreshing, Graphics are polished across the board, Good value collection, Lots of content

Can be too slow paced at times, Lemmings has a useless tutorial, Move controls in Lemmings can be awkward, No Echocrome local multiplayer, No map editor in Lemmings, Not to everyone's taste