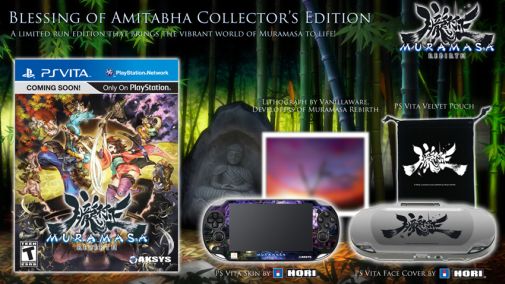 Vanillaware’s Muramasa: Rebirth, released for the PlayStation Vita in Japan recently, will be heading to North America on June 25th. It will be published by Aksys Games and is a remake of the classic Wii title but with new scenarios and four new playable characters.

A limited edition version of the game has also been revealed that will include a PS Vita face cover, PS Vita skin, PS Vita pouch and a high resolution framed lithograph by creator and lead designer George Kamitani. Additionally, those who pre-order from GameStop or Amazon will receive an exclusive Abridged Soundtrack for the game.

Muramasa is a 2D side-scrolling action game that focuses on the trials and tribulations of Kisuke and Yuzuruha during the Genroku Era.

The game supports three styles of play, which can either make the game more action oriented or character oriented depending on a player’s preference. The lethal Shigurui mode is equivalent to a Hardcore difficulty since you have only 1 health and can’t level up.