Whatever potential the new Trails races and Career Mode could offer is marred by technical issues, shoddy visuals, wonky physics, and much more.

In the world of video games, there are revivals, comebacks, remasters, and re-imaginings. And then there are the inexplicable franchises which keep soldiering on, regardless of sales, publisher shutdowns and critical reception. Rainbow Studios’ MX and ATV series are examples of the same, beginning as separate titles and eventually merging to create MX vs. ATV. MX vs. ATV Legends is its newest title, bringing the experience to a new generation of consoles. Unfortunately, its reach is far beyond its grasp.

When you look at any game, a core eventually emerges, even more so when it comes to racing games. Even with Motocross titles, it’s not just about racing around tracks – it’s about the timing of the jumps, the navigation of the turns, the customization of one’s vehicles, and the sense of mastery that comes with perfecting your run. MX vs. ATV Legends seems to strive towards this this, but falters in almost every imaginable department. It stops just shy of collapsing but the overall core is rickety, and almost pitiable at times. 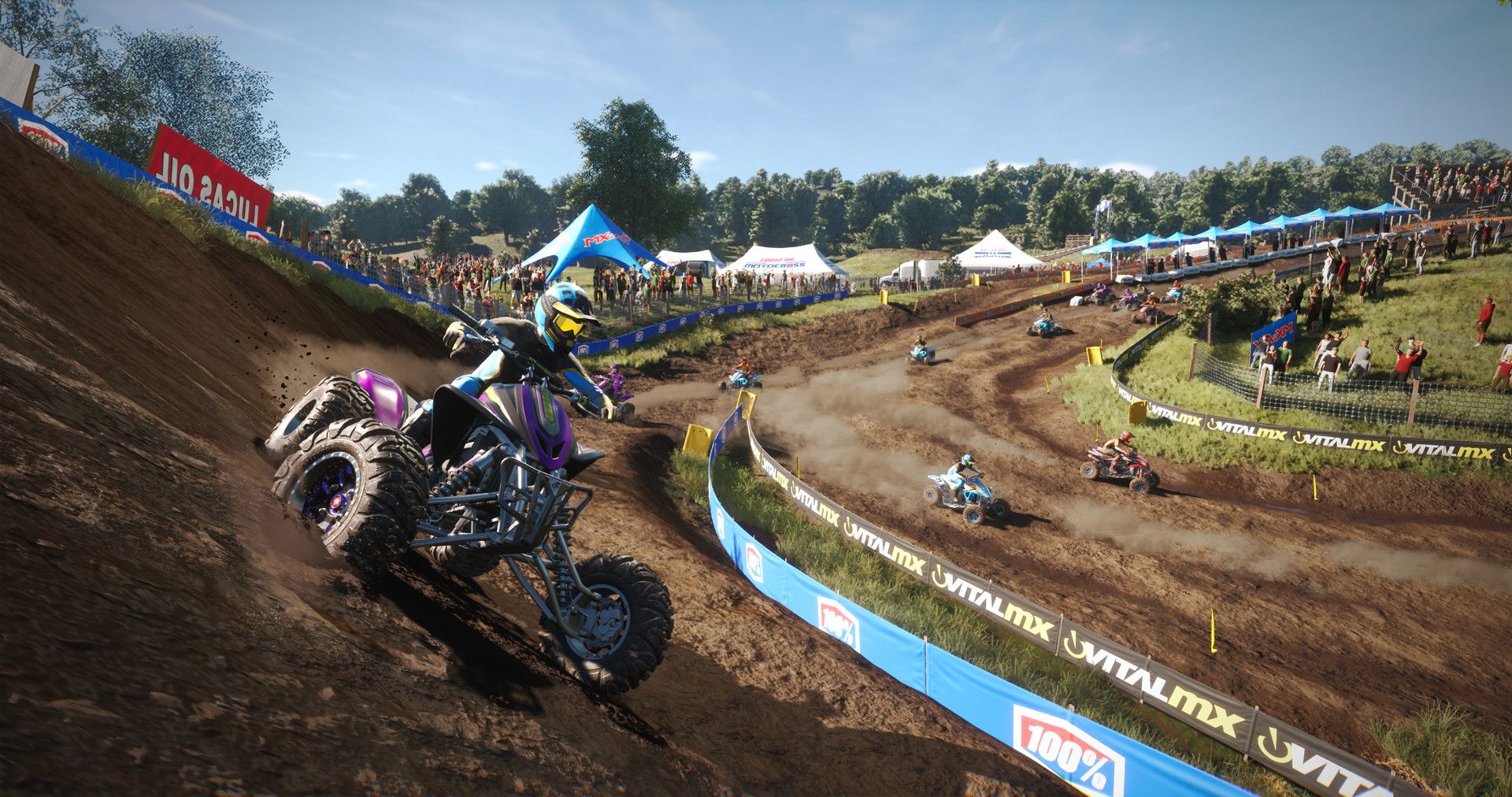 "The track design is actually pretty decent – each feels distinct in terms of the sections, which demand different techniques."

There are multiple different modes but you’ll begin the game in the new open-world space. This is where you’re introduced to the Compound and various characters. Don’t be fooled by the openness though. The hills aren’t as expansive as they seem; there are rollers, whoops, inclines and jumps for performing tricks along with some collectibles. But drive too far off into the horizon and you’re unceremoniously repelled back. It’s ultimately a barren landscape serving very little purpose.

After speaking to a few NPCs, you’re instructed to complete some tutorials, which will teach you about the various techniques (like how to lean when approaching corners). From there, you graduate to jumps and tricks – this is where things start to come undone. The left and right analog sticks can be manipulated to perform different maneuvers – holding back on the former will see you perform a wheelie. From there, it gets more complicated – hold L2 for mid-air control, manipulating both sticks and releasing the left at the correct moment for more air, leaning forward for more recovery time after a jump. Pulling these off is incredibly unwieldy, at best.

It only gets worse when you participate in actual races. Career mode, regardless of whether you’re pursuing MX, ATV or UTV events, is grouped into different segments like Invitationals, Trails races, Nationals, and so on. Of course, to unlock ATV and UTV races, you need to complete enough of the MX career first. The track design is actually pretty decent – each feels distinct in terms of the sections, which demand different techniques.

Whoops, for example, necessitate holding back on the right stick to quickly skip over them. Some big ramps require more height on take-off – others demand you ease up on the acceleration and stick the landing. Though these areas can be quite repetitive in terms of scenery, the rolling green plains and snow-covered mountainsides offer some gameplay differences. This isn’t to say they look amazing either and issues like texture pop-in or terrible rider animations certainly don’t help. 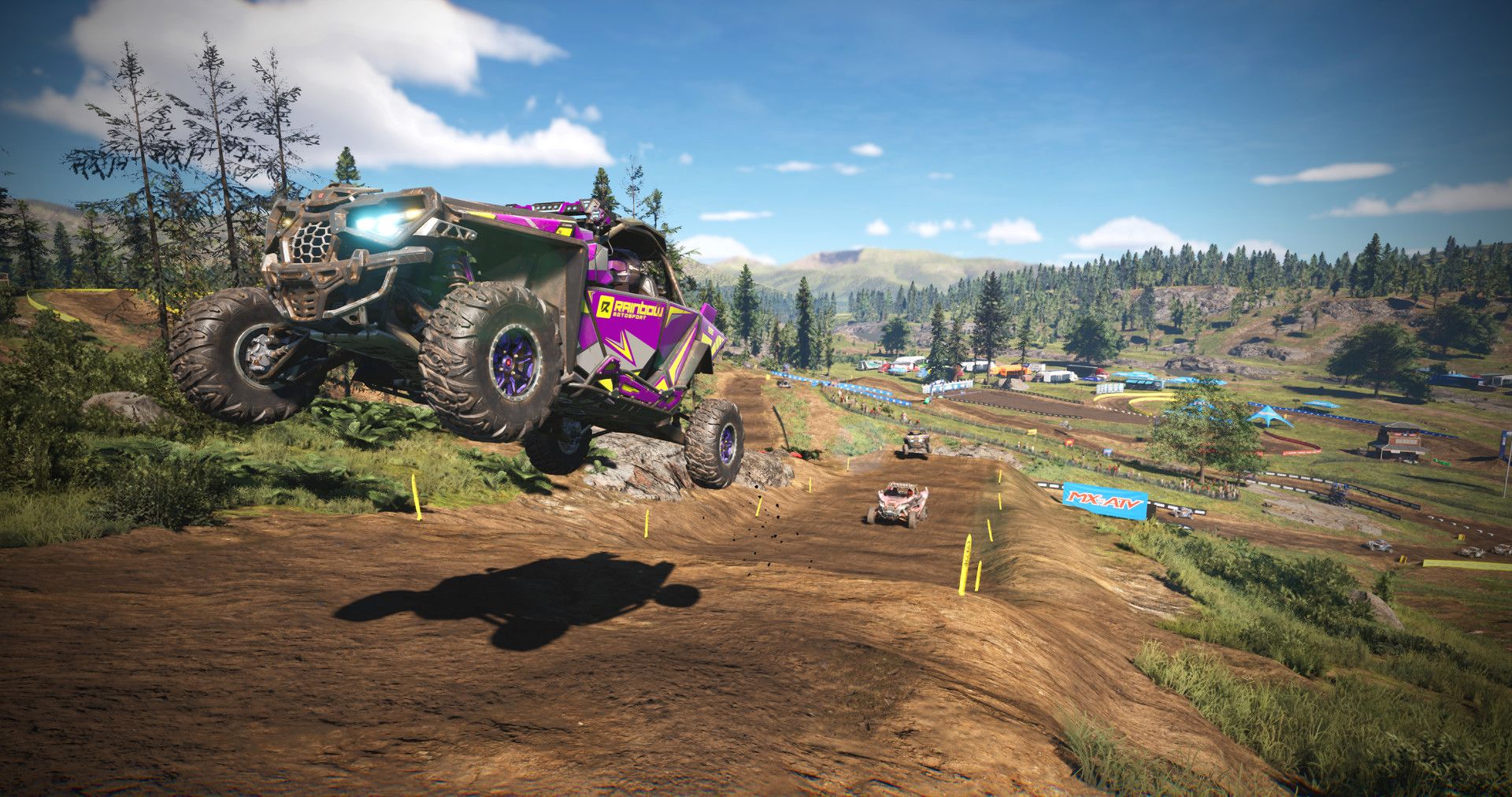 "Even if all of these gaffs were absent, Career Mode can still be very low-rent with its thread-bare plot and forgettable characters."

Of course, you’re quickly introduced to another issue with Legends’ gameplay – the other racers. Their AI is, to put it kindly, bad. Sometimes, they’ll constantly be ahead of you, skillfully navigating jumps without so much as a hitch. Other times, they’ll constantly slip, slide and crash but recover quickly and remain competitive. Given how random collisions can be, whether it’s with other drivers or the environment, this can turn some races into messy affairs.

The physics can also be very hit-or-miss. While navigating berms and ruts, the controls can feel precise when leaning with Motocross bikes. ATVs, on the other hand, feel heavier which makes sense given their weight and its distribution. UTVs, meanwhile, are almost like hockey pucks, ping-ponging around the environment, as likely to keep going after an absurd crash as they are to stop dead-cold on the most random of objects.

But while MX bikes and ATVs feel the most responsive, there are still plenty of instances where you will randomly crash, overshoot a turn, jerk around too quickly on a turn, and so on and so forth. Even the water can be your enemy – a shallow stream can sometimes cause you to outright stop and crash. Be careful on the beach as getting too close causes the water to suck you in, almost never to return. At least the tricks look nice, though they don’t really add much of anything to the overall gameplay.

Even if all of these gaffs were absent, Career Mode can still be very low-rent with its thread-bare plot and forgettable characters. Essentially, you win races to earn more fans and currency. You do have points where it branches off into different kinds of events, and there is decent variety, whether it’s straightforward lap-based races or hitting a certain number of checkpoints while having some freedom of navigation. 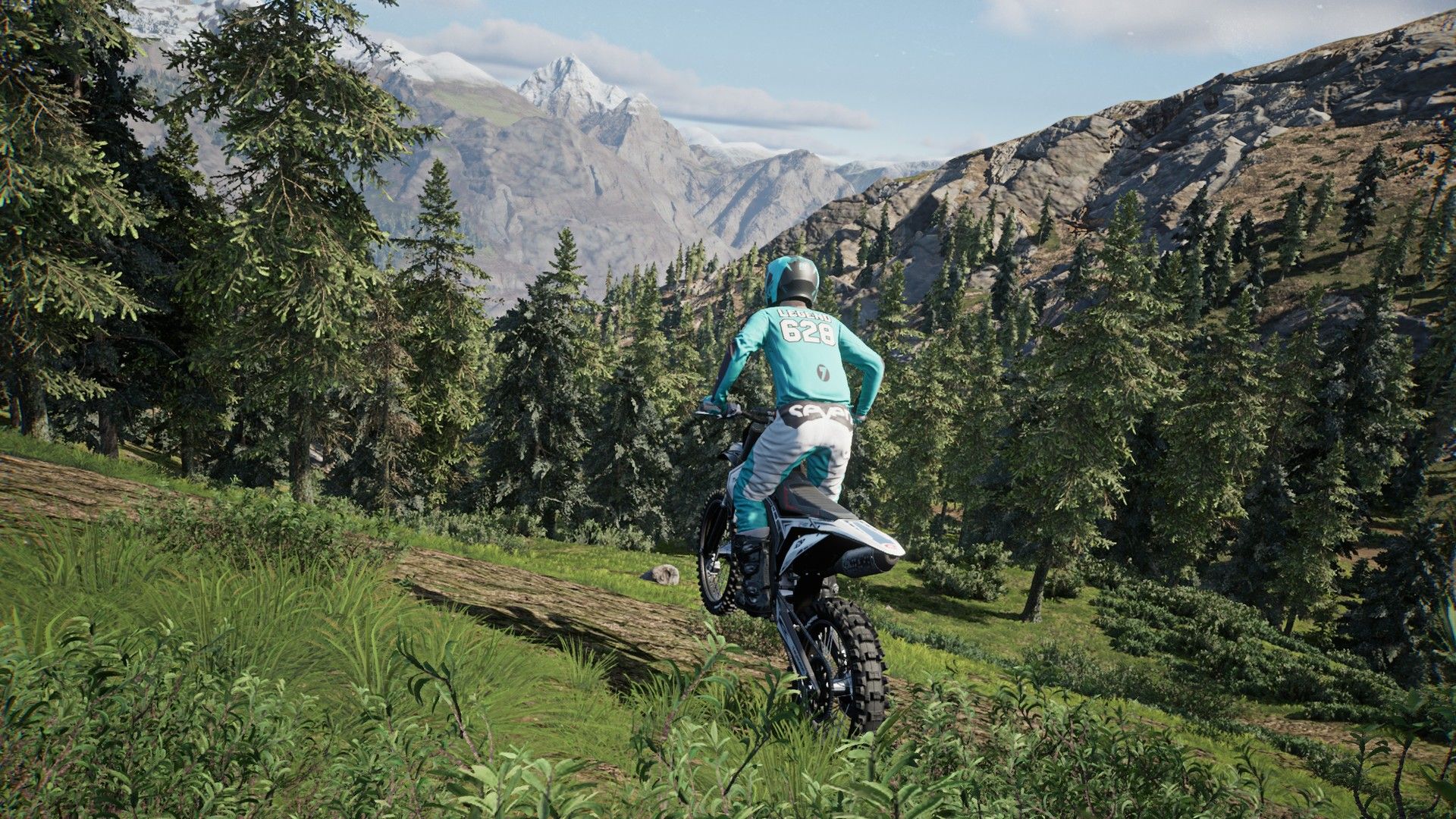 "One of the better aspects of Legends is the new Trails mode. Many of these tracks are far more open and sport various branching paths."

However, due to a constant crashing issue, I was unable to progress past a certain point in MX Career. And not advancing in MX Career means the ATV and UTV Careers come to a stand-still as well.

In terms of customization, the currency is used to either purchase better parts when tuning (which can make a ton of difference, even when going back to replay previous races) or customize rims, suspensions, and so on. Even by arcade racing standards, there’s a surprising lack of options – think along the lines of “upgrading acceleration at the cost of power” and vice versa, though the alternative can provide benefits to traction as well.

Cosmetic customization is similarly boring and limited, whether you’re changing outfits and helmets for the rider or having to spend currency to change the colors of your seats, handlebars and whatnot. I know recoloring isn’t free in real life off-road racing but I refuse to believe my own in-game garage is that stingy when it comes to paint jobs. At least they provided new parts and vehicles for free while progressing through Career Mode.

One of the better aspects of Legends is the new Trails mode. Many of these tracks are far more open and sport various branching paths. These offer actual, impactful choices and learning them for the most optimal run time can be entertaining. It also doesn’t hurt that the overall design and look of these environments is nice, graphical quality notwithstanding. 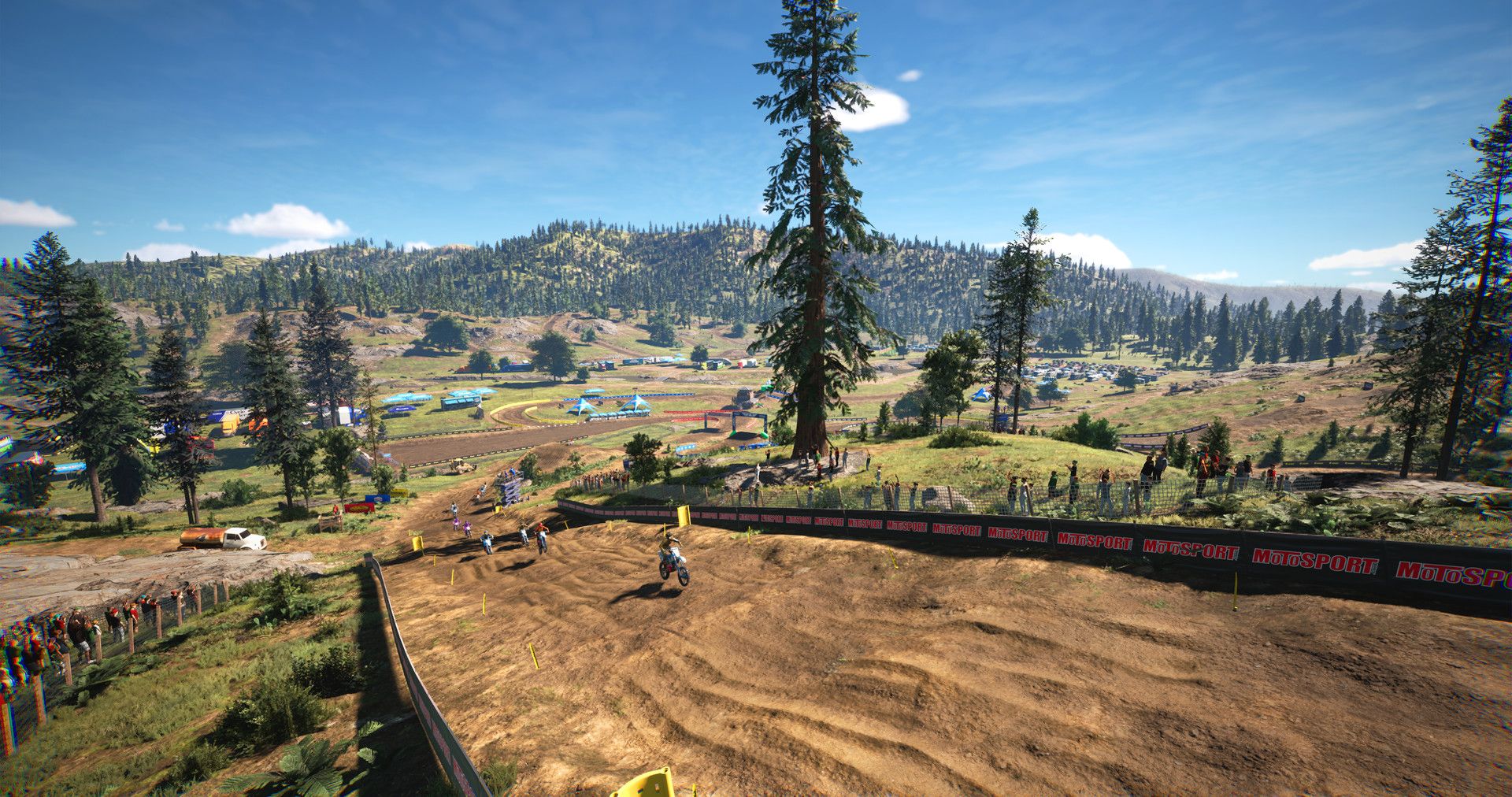 "I really hesitate to call MX vs ATV Legends an outright disaster. It’s not great, by a long shot, and yet, it’s sort of enjoyable at certain points, in certain instances, in small doses."

Aside from the lackluster Career Mode and Exhibition for selecting different types of events and tracks, there’s multiplayer. When queuing online in Quick Play, I was placed in a race with no other drivers. Why I didn’t win by default continues to haunt me to this very moment. Suffice to say that I didn’t revisit the option later. You can also matchmake with other players to explore the barren open-world together for some inexplicable reason.

As you’ve no doubt gathered by now, MX vs ATV Legends isn’t a very good game. The visual quality is rough, falling below average in terms of effects, textures and animations. Sound effects, notably the engine sounds, are similarly low-budget and the soundtrack is either an acquired taste or downright annoying (even if you’re a Bring Me the Horizon fan). This could all be forgiven if the gameplay was on point but wonky AI, inconsistent and at times incomprehensible physics, unintuitive controls and various bugs just keep getting in the way.

Despite all of this, I really hesitate to call MX vs ATV Legends an outright disaster. It’s not great, by a long shot, and yet, it’s sort of enjoyable at certain points, in certain instances, in small doses. If you’re looking for an in-depth Career Mode, an extensive open-world to explore or compelling Motocross gameplay, then you’re better off looking elsewhere. Even with the lowest expectations, MX vs. ATV Legends barely passes muster.

This game was reviewed on PS5.

Tracks are decently designed and offer a variety of different obstacles. Environmental variety is fine. When they're on point, the controls and physics accomplish that high-precision racing ideal. Long Career mode. Trails is a nice new mode with its branching paths.

Final Verdict:
AVERAGE
MX vs ATV Legends could have been a decent arcade-style, sim-lite racer. Whatever appeal could be found in mastering jumps and customizing vehicles is beset by numerous issues. It's not grossly offensive but you're better off investing time in just about any other racer.
A copy of this game was provided by Developer/Publisher/Distributor/PR Agency for review purposes. Click here to know more about our Reviews Policy.