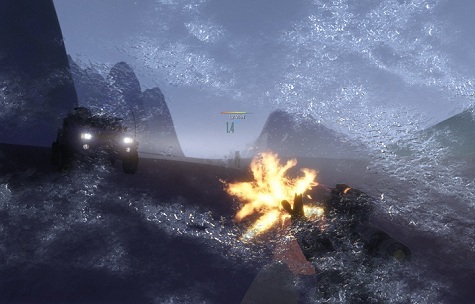 Starting on October 31 players will be challenged with locating and assisting the infamous avatar NEVERDIE, who has joined the fight to rid the world of The Thing.  NEVERDIE went missing when his helicopter transporting a supply of flamethrowers and armor crashed into the ROCKtropia Antarctic. The exact location of the downed chopper is unknown, but “fragmented distress signals” are being received via Facebook and Twitter feeds and provide clues to his location and the whereabouts of his scattered precious cargo.

The flamethrowers and armor are vital to the containment of The Thing in the Antarctic.  As such, Universal is offering one-of-a-kind props used during the making of the thriller The Thing as rewards to the first brave adventurers to find NEVERDIE and help get his shipment of gear back to the base camp.  The movie props include a parka worn by one of the cast members and a pair of bloodied slacks used in the shoot.  Additional prizes to be won during the course of the event include Collector’s Edition DVDs of John Carpenter’s original 1982 film as well as in-game rewards, such as Flamethrowers and Armor

Volunteers are needed immediately to help with this critical search and rescue mission.  New players can sign up here to create their free avatar and begin their adventure.  It is highly recommended that new recruits train for the mission by attempting to hunt down The Thing in order to earn access to a helicopter, which will allow them to support in both ground and aerial search efforts.