This is some serious performance gains.

DirectX 12. Get used to seeing that splashed everywhere in the coming months, because if the reports are to be believed, it’s going to have a massive impact for PC games development. 3DMark, the extremely popular cross platform benchmark, released  DX12 Vs DX11 Vs Mantle benchmarking software. PC World then picked it up and ran with it. The final results were far better than what many had predicted.

During their tests, PC World found that the AMD R9 290X saw a speed of 1300% in 3DMark’s API test, with Mantle scoring 1200% over the DX11 API test score. The DX12 API score however, takes the lead by a considerable margin. PC World also went ahead and swapped out the R9 290X for Nvidia’s beefy GTX Titan X and found that the two ran almost identically, despite Nvidia’s GTX Titan X costing nearly three times as much as the R9.

Intel’s Iris Pro Integrated GPU saw a boost in performance of X4 and the test revealed that Intel’s Quad Core CPUs (with Hyper Threading on) gave the fastest performance, with a noticeable difference in the DX12 Multi Threaded tests. Obviously, this is all fantastic stuff. But this is a benchmark, real world results are likely to vary from machine to machine. But all said, this is good news. 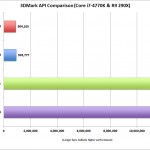 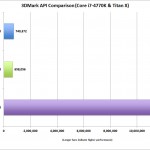