Xbox Now, Xbox Sports and Xbox Fitness are among the trademarks.

Microsoft has been trying to take over the living room market for quite some time now, with Kinect and the renovated Xbox Live (along with SmartGlass) being aimed at gamers within that precious space (read: families) more than anything. It appears that along with those services and others like Netflix and Twitter, Microsoft will be expanding with a few more as new trademarks have been discovered for the same.

Siliconera has discovered some trademarks for services such as Xbox Sports, Xbox Fitness, and Xbox Now for Europe. 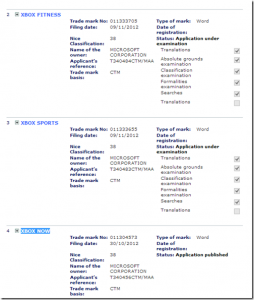 The services seem to be a kind of video programming, with the classification specifically being for “telecommunication services, namely, providing electronic transmission of video over the Internet.”

There was also a trademark for The Crimson Dragon from Microsoft which has two different classifications: “video game software” and “providing online video games.” More info as it comes in, of course and we’ll see what Microsoft has planned for North America as well.