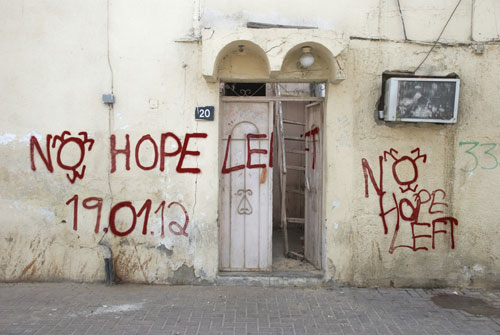 A mysterious new viral website called NoHopeLeft.com has gone up on the internet, and several reports indicate that it might be teasing Resident Evil 6. The website shows several images of deserted places all throughout the worls with bio-hazard signs spread across randomly. BioHazard is of course the Japanese name of the Resident Evil series.

The site features many images of the words “No Hope Left” written on walls in many locations, and the date 19.1.12 is prominently featured, meaning that a reveal or an announcement could be on its way today.

It also features several videos, probably showing the effects of an outbreak or the “apocalypse” that must be taking place in the game.

TheSixthAxis tracked down the company that manages the several billboards that feature such signs and teasers, and the firm has confirmed that they are run by Capcom: “Panel number is 2375 03 Parry Street. The company advertising on it is CAPCOM.”

The site is registeres to Identity Protection Service. The ciral site for Operation Raccoon City was also registered under the same firm. (via NeoGAF).