It’s been long rumored that Microsoft will offer multiple next-gen Xbox variants but what could be their specifications?

Cerny and co over at PlayStation surprised everyone by not only acknowledging the existence of the PlayStation 5 but seemingly confirming the long-standing rumors that Sony’s ninth-gen console would be based on a Navi platform from AMD, providing a generational boost to processing power and enough graphics grunt to drive 4K experiences (and a bit beyond).

We’ve heard relatively little from Redmond on their console efforts but if half the rumors around Microsoft’s ninth-gen efforts are to be believed, their ambitions for Xbox are broader than either Sony’s or Google’s: A premium console with high-end hardware—Project Scarlett—launched alongside a mainstream machine that relies heavily on xCloud functionality—Lockhart. Both Lockhart and Scarlett are very much up in the air, with little in the way of official confirmation.

In this feature, we’ll try to better understand Microsoft’s Project Scarlett and Lockhart by contextualizing them in terms of the competing offerings from Sony and Google. No matter what the final specifications are, Scarlett will likely provide an experience broadly comparable to the PS5, and Lockhart (and xCloud) will provide a broadly similar experience to Stadia.

Anaconda’s GPU: Custom 56 CU Navi GPU, in excess of 12 TFLOPs, but where does Lockhart fit in? 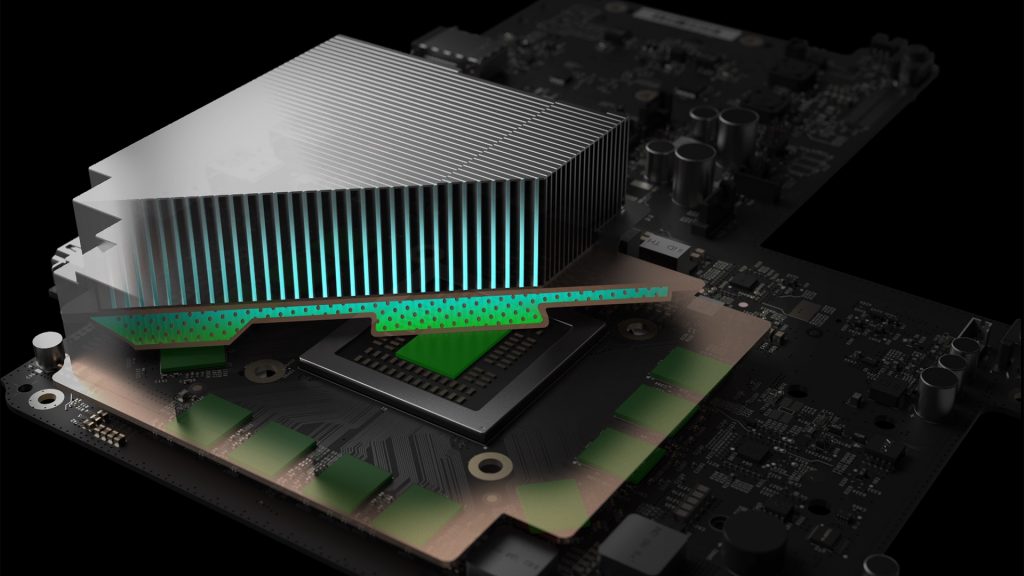 Khronos—the folks who oversee Vulkan—have a listing of hardware that’s compatible with the API, and “Google Games Platform Gen 1” is listed as being based on the GCN 1.5 architecture (AKA Vega). For Google it makes sound business sense to leverage the Vega platform. Vega is a great choice for 4K gaming but neither the Vega 64 nor the 56 sold very well. AMD likely has a large inventory of unsold and binned Vega GPUs lying around—exactly what Google needs to build up a server infrastructure.

While Stadia is being powered by Vega, Sony’s confirmed that the PS5 will be utilizing a Navi-based GPU and it’s not a stretch to assume that Anaconda and Lockhart will be using the same. We already have a reasonable idea of how Navi will perform. In the PC space, rumors peg the flagship Navi card—the RX 3080 XT—as offering RTX 2070 levels of performance. This would put the top-end Navi part a good 15-20 per ahead of Vega 64, and offering somewhere in the ballpark of 15 TFLOPs of compute power. AMD’s GCN core—which Navi is still based on—is a known quantity. We know that GCN tops out at 64 CUs, so the 56 CU 3080 XT is itself a cut-down product. However, thermals, power consumption, and economics dictate that any Navi parts in the console space will be further binned and clocked more conservatively. A fully-enabled Vega 64 GPU delivers around 12.7 TFLOPs, so 12 TFLOPs is more or less the lower boundary of what we’d expect from console Navi in the PS5 and Anaconda. Since Navi is a more mainstream-oriented product, it’ll be using cheaper GDDR6 memory as opposed to the HBM found in Stadia’s Vega 56. GDDR6 speeds are significantly faster than GDDR5, however, and 14 Gbps GDDR6 modules over a 256-bit bus can offer comparable memory bandwidth to the Stadia’s HBM—the ninth-gen consoles will definitely not be bandwidth-starved.

But what about Lockhart? The rumor mill points to a pared-down Navi part that hands in 4 TFLOPs of compute performance, roughly in line with the PS4 Pro. Polaris 11 debuted sometime after the arrival of the performance-segment Polaris 10-based parts like the RX 480, with the entry-level RX 460, sporting a mere 14 CUs. With a bump to clock speeds thanks to being built on the 7nm process, we’d expect a 14-20 CU Navi part to deliver roughly 4 TFLOPs of compute power at bargain-based prices. In the PC space, we’d expect Navi 11 to replace RX 560 and RX 460 in the sub-$100 market. In the console space, this would open up the opportunity for Microsoft to deliver Lockhart at a sub-$300 price-point. Rumors point to xCloud being leveraged to enhance its graphics capabilities. We’re curious as to how this’d be accomplished and whether or not it’s even practical. Cloud computing was touted as the Xbox One’s ace up the sleeve against the brawnier PS4, but that never panned out. xCloud has been under heavy development and Microsoft appears determined not to repeat its mistakes here, but we need to see a more of xCloud before drawing conclusions.

Processor: 8-core Third-gen Ryzen Across the board: Parity across price-points 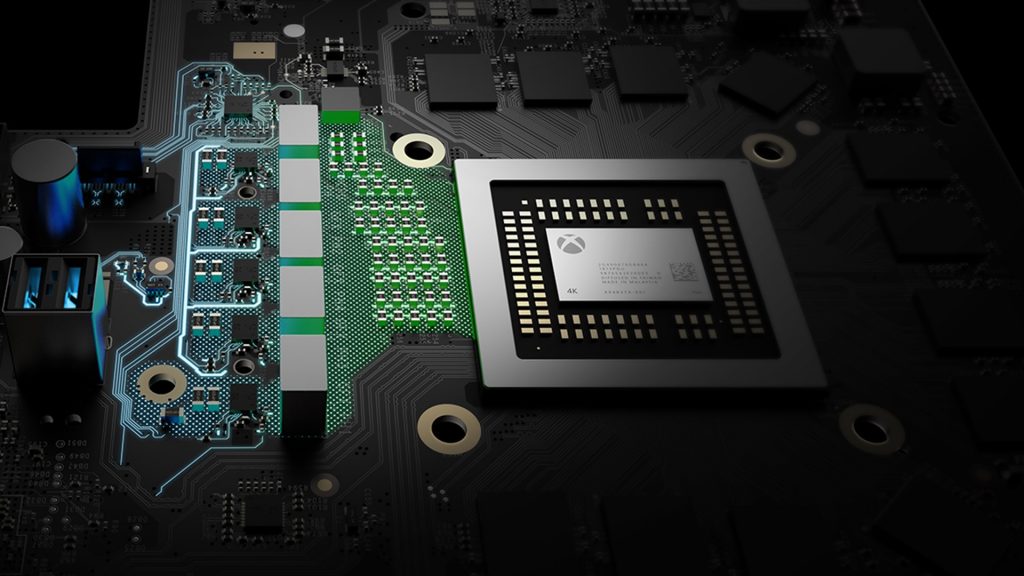 While both Anaconda and the PS5 are almost certainly going to have 8-core, 16-thread Ryzen processors, we’d put our money on Lockhart featuring the same CPU configuration, even if it’s shipping at a much lower price-point. It helps here to have an understanding of AMD’s production approach with Ryzen. Intel designs processors around a monolithic die—All their processors are fully-enabled chips, each designed separately. The i5-8400 is a hexacore chip with all cores enabled. Likewise, the i9-9900K is a fully-enabled eight-core chip. Using this approach, Intel discards chips with defects in even a single core. Yields decline precipitously with higher core counts and prices rise exponentially.

With Ryzen, AMD adopts the opposite approach. In some ways, Ryzen is the fulfilment of your middle school fantasy of running “dual” or “triple” processors. Every Ryzen processor is made up of one or more functional quad-core modules called CCXs, connected together by the Infinity Fabric mesh interconnect. Due to binning, individual cores on the CCX may be disabled (for instance, the Ryzen 5 1600 in our current rig has 2 CCXs, each with one core disabled, for a total of 6 functional cores). This allows AMD to take a single, easy-to-manufacture, quad-core module, and then scale it up without discarding partially functional units. All Ryzen parts, from the single CCX (with two cores disabled) Athlon 200GE right up to the monstrous 8 CCX, 32-core Threadripper 2990WX are built around this logic. This means that AMD’s processor prices scale linearly, and not exponentially with core-count. How is this relevant in terms of Lockhart, though? As we mentioned earlier, Lockhart will arrive at a significantly lower price point than either the PS5 or Anaconda, and this means it’ll feature cut-down hardware. Maintaining CPU-side parity is much more important in consoles than GPU parity.

Two console SKUs with differing GPU capabilities but the same processor can easily run the same game logic and code. The only difference would be that the machine with the less capable GPU would run at lower framerates or a lower resolution. Having a different CPU makes things much more difficult for developers, especially in terms of maintaining cross-compatibility: The underlying game logic—how assets stream in, how AI is handled etc—would have to be tweaked, which is much more difficult than just setting a flag for console B to run at, say 900p. Lockhart sporting a hexacore process is unlikely, enough. A cheaper quad-core is just about impossible: since the start of the eighth-gen, there’s been a move towards greater multithreading in games, with developers balancing CPU utilization across 8 cores. It’d be a nightmare to console developers to code game logic that runs across 16 threads and then optimize it to run on a quad-core. Besides, leaks point towards the hexacore 3300G being the lowest end third-gen Ryzen product. Third-gen Ryzen doesn’t get cheaper than that.

Thanks to the way in which Ryzen parts are produced, hexacore Ryzen processors are built on the same silicon as their octa-core counterparts. This means that that there is a lower price threshold around $100—you can’t get that silicon for any less, at all—you need 2 CCXs, after all. But the production cost differential between the hexacore and octa-core SKUs isn’t likely to be that high. Leaked prices indicate that in the PC space, the octacore Ryzen 5 3600 will be less than $50 more expensive than the hexacore 3300G. Factoring in bulk purchasing discounts, this’d mean that, even if it uses the same processor as Anaconda, the bill of materials for Lockhart would be barely 10 percent more than if it used a less capable processor.

Memory: A key point of divergence 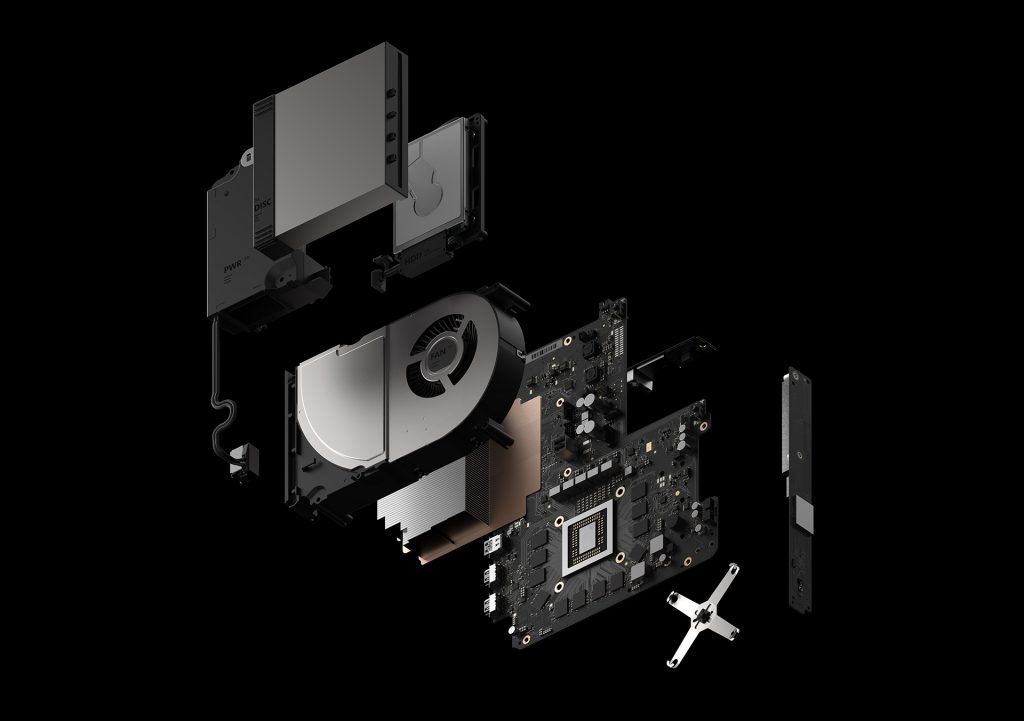 Both the PS5 and Anaconda will feature at least 16 GB of shared memory. Considering what Sony said about the PS5 supporting 8K (in whatever form), we wouldn’t be surprised if both platforms ended up with more memory than this, in the 20-24 GB range. Running games at 4K and beyond is a big part of why the premium consoles will sport such a large amount of VRAM. This issue doesn’t arise with Lockhart, which will most certainly offer up 1080p experiences. At lower resolutions, you simply don’t need that much VRAM. We predict that Lockhart will feature anywhere between 12 to 16 GB of shared memory—quite enough to handle higher resolution assets when running at conventional resolutions.

Storage: SSDs across the board

Apart from the boost to CPU power, storage speed is the area that sees the greatest generational leap this time around. Both Sony and Google have confirmed that SSD storage will be used in their respective machines and we have no reason to believe that Microsoft would do otherwise, at least with Anaconda. SSDs do add quite a bit to the bill of materials. And games aren’t getting any smaller. This creates a bit of a Catch-22 situation with Lockhart: Dropping SSD capacity to 512 GB would reduction costs but, with existing games that take up more than 100 GB of space, Lockhart owners would be limited by the number of games they can have on the system at any given time. While Anaconda and the PS5 are likely to feature 1 TB SSDs, Lockhart will either sport a smaller capacity SSD or hard drive storage.

There’s still no official word from Microsoft about Anaconda or Lockhart, apart from the suggestion that they’re working on “something.” Nevertheless, between the leaks and official hardware reveals, the ninth-gen is looking increasingly interesting. Sony, Microsoft, and Google are bringing vastly greater amount of processing power to the table, paired with capable, mid to high-end GPUs. We’re looking forward to deeper (and, of course, better looking) gaming experiences in the not-to-distant future.