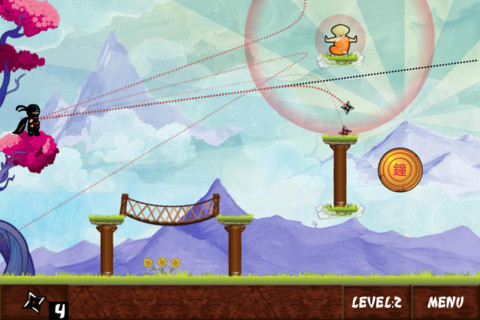 Another one of Chillingo’s masterpeices is Ninja Throw HD, except this isn’t even close to being one. It’s sort of formulaic and the same thing you expect from most puzzle based games that hit the iOS. Clear stages, unlock more and try to solve puzzles. Ninja Throw HD follows the same thing, but this time you’re a Ninja! And you throw Shuriken at the clouds, called Hakaze. The goal of the game is to make the Shuriken hit the round bell type thing at the end, which takes you to the next level. The faster you do this, the better score you get.

This is one of the hardest games I’ve played on the iPad, because once you finish the easy tutorial section which consists of 30 levels, the second stage will pretty much bring your progress to a halt unless you’re really clever. Hakaze wind clouds blow winds in a certain direction, so you can manipulate that with a custom placed Hakaze and get your Shuriken to your destination. It’s not going to be tough, as some of the levels are incredibly hard. The difficulty is a mixed bag, due to a mixture of easy and hard levels thrown at you.

There are plenty of stages here, as you would expect with any Chillingo game. It can also get a lot addictive if you know what you’re doing, as puzzles are one of the high points of this game and will really challenge you. I’m glad the developer didn’t go the easy route here and made it tough. Most iOS games you see are aimed at a mass market audience so you really don’t see games that thoughtfully invoke the player. There will be a lot of obstacles for your Shuriken, such as moving platforms, TNTs, or just oddly placed items in the level. 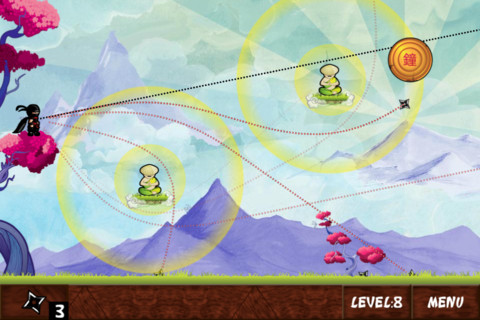 You can score a lot higher if you manage to clear the level quickly, as you only have a few Shurikens with you and depending upon the usage per level, you are scored accordingly. We already expect games such as these nowadays, so it’s not that unique or makes you go, “Wow, this game is awesome”. I wish they would change the formula a bit here, as it is getting incredibly stale. The game is incredibly cheap though, since it costs just $1.29 in the app store. It’s not like you have anything to lose really, especially if you love games such as these.

Ninja Throw HD contains a lot of content, and some hard puzzles. It can be really challenging and fun at the same time, and some of the levels are cleverly designed. If you love games such as these, or puzzle games in general, this is worth a look.

Final Verdict:
FAIR
Ninja Throw HD contains a lot of content, and some hard puzzles. It can be really challenging and fun at the same time, and some of the levels are cleverly designed. If you love games such as these, or puzzle games in general, this is worth a look.
A copy of this game was provided by Developer/Publisher/Distributor/PR Agency for review purposes. Click here to know more about our Reviews Policy.