And as far as we know, Amnesia isn’t for consoles.

Give credit to print journalists: They know how to keep us guessing. The shameless teases this time are Nintendo Power, who have promised a world exclusive “first look at a stunning new game”. This, after the line that states, “Are you scared? You should be…” to lead into hype for the February 2013 issue of the publicatio, which goes on sale on the 13th. 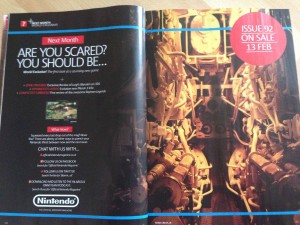 Looking at the machine-like architecture on the right, the first guess would be Amnesia: A Machine for Pigs, except that isn’t a new game nor will it be releasing for the Wii U/3DS any time soon (to our current knowledge). Maybe a brand new horror IP that Nintendo will debut specifically for the new home console?

Given that the Wii U Gamepad is rife with possibilities for horror, it’s not a bad idea at all.

Of course, next month’s issue will also be carrying new information on Pikmin 3 along with an exclusive review of Luigi’s Mansion: Dark Moon for the 3DS and the first review of Rayman Legends for the Wii U.