The Manager Mode, which had become the staple of FIFA games in the past few years, has been axed, and will not be featured in EA’s upcoming ambitious FIFA game, FIFA 11. Due to several issues with the FIFA 10 Manager Mode, EA have decided to take action, and will be featuring a ‘Career Mode’ in FIFA 11 instead.

The Career Mode (pictured below), according to EA Sports’ blog, will see the life of a player as a footballer, a player-manager and a manager.

The all new transfer system of the game will ‘bring the ups and downs of the transfer window to life.’ The new calender system will make it ‘easier to plan your career, manage your squad or experience the thrill of breaking your way into the first team.’

Players that are created through the all new Creation Center will be usable in the Career Mode, and using the all new friends’ leaderboards, we will be able to see how we rank against our friends in terms of statistics and Career earnings.

An EA rep wrote on their blog recently, and reported that they are playing through an early build of the Career Mode, and are currently in the Player-Manager state. 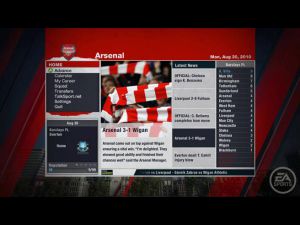 ‘So far it is a big change from FIFA 10,’ they say. ‘Things seem a lot slicker and refinements in a number of areas are definitely noticeable… The transfer system is now a two-stage negotiation where you agree a fee with the club in question and then have to agree terms with the player themselves.

‘The calendar now has a daily view and will stop progressing if there is an important action happening such as an email from a team interested in buying your player or something from the Board. You can easily see when the cup matches are, friendlies, international matches and your standard league matches.’

Watch this space for more info on FIFA 11.