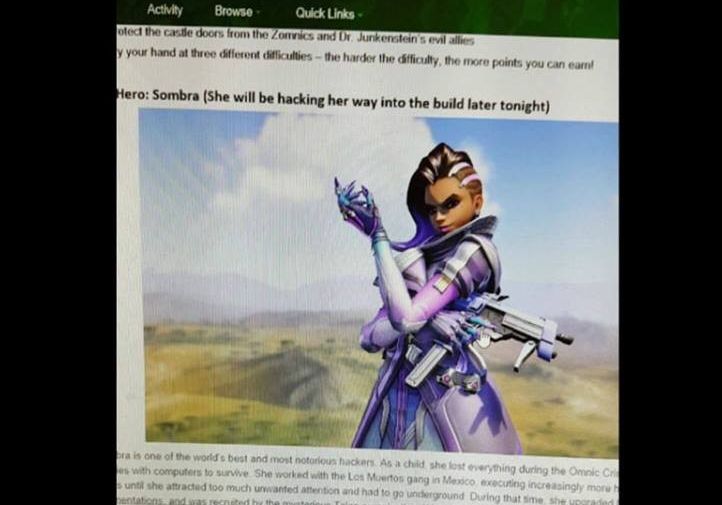 Over the weekend, a rather strange leak emerged for Blizzard Entertainment’s Overwatch. After months of ARG games and hidden codes, the hero shooter’s next big hero Sombra was leaked by what seems to be a screenshot of an internal email.

The screenshot in question showcases her appearance, stating, “She will be hacking her way into the build later tonight”. This seems to hint at her addition to whatever build is currently being tested internally. Other details include her backstory – she’s apparently the one of the world’s “best and most notorious hackers” who lost everything as a child during the Omnic Crisis. Shortly thereafter, she worked with Los Muertos in Mexico and joined up the antagonistic Talon.

What’s even more interesting is a part in the text which states how she will “protect the castle doors from the Zomnics and Dr. Junkenstein’s evil allies”. It further says: “Try your hand at three different difficulties – the harder the difficulty, the more points you can earn!” This seems to indicate that a Horde-mode like event is coming to Overwatch, possibly for its Halloween-themed event since Dr. Junkenstein recently appeared in a comic with the same theme.

What are your thoughts on all these leaks? When will Sombra arrive in Overwatch? Time will tell but for now, big things are afoot from Blizzard.