Geoff Goodman left the company earlier this year, having been with the team since launch (and even before with Project Titan).

Microsoft Gaming CEO reiterates commitment to release the "same version" of Call of Duty on PlayStation on the same day as other platforms.

Loot boxes are earnable afterwards from regular gameplay. However, they will cease to exist when Overwatch 2 launches in October.

The event will be available until June 6th and feature remixed Legendary skins along with past Weekly Challenges and Seasonal Brawls.

The three-part event will see the return of past Brawls and mini-event skins along with remixes of popular Legendary skins. 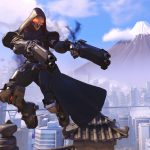 Ending on March 8th, the Challenge allows for unlocking a new Legendary skins along with other cosmetic rewards for Reaper.

A spokesperson for the title addressed the lower number of Legendary skins available in the Lunar New Year event compared to previous years' offerings.

Two new Legendary skins and emotes along with a new highlight intro are available until February 15th along with three new Weekly Challenges.