“People Will be Held Accountable for Their Actions,” Says Activision Blizzard CEO

"There is no place at our company where discrimination, harassment, or unequal treatment of any kind will be tolerated," Bobby Kotick says.

Following allegations of persistent and widespread discrimination and sexual harassment at Activision Blizzard coming to light thanks to a lawsuit filed by the California Department of Fair Employment and Housing (DEFH), the company has been scrambling to quell a firestorm of outcry and controversy, which has been propounded by large numbers of its employees publicly acting out against the company’s poor initial responses to the lawsuit, from an open letter criticizing the same to a formally staged walkout.

Last week, Activision Blizzard CEO Bobby Kotick broke his silence on the issues in a letter sent out to all employees in which he apologized for the company’s “tone deaf” responses, and in Activision’s recent quarterly earnings call, he addressed the topic again, stating that “discrimination, harassment, or unequal treatment of any kind will be tolerated” at Activision Blizzard.

“Our work environment, everywhere we operate, will not permit discrimination, harassment, or unequal treatment,” Kotick said. “We will be the company that sets the example for this in our industry.”

Kotick went on to state that people at the company fund guilty of the sort of allegations that have come to light in the last few weeks will be “held accountable”, which will include not only termination of employees acting in a manner that harms the safety of the workplace, but also anybody in a management position who impedes investigations and evaluations.

“People will be held accountable for their actions,” Kotick said. “That commitment means that we will not just terminate employees where appropriate, but will also terminate any manager or leader found to have impeded the integrity of our processes for evaluating claims and imposing appropriate consequences.”

In its quarterly fiscal press release, Activision Blizzard provided a similar statement, promising that swift action is being taken “to ensure a safe and welcoming work environment for all employees”, which includes the hiring of a law firm “to conduct a review of our policies and procedures to ensure that we have and maintain best practices to promote a respectful and inclusive workplace.”

The law firm in question is WilmerHale, which has a reputation of being a union-busting firm that also apparently has pre-existing relationships with Activision Blizzard executives. As IGN reports, a coalition of employees of the company has denounced the hiring of the law firm for these reasons, among several others.

“We are creating safe spaces, moderated by third parties, for employees to speak out and share areas for improvements,” Activision Blizzard wrote in its aforementioned press release. “We will be evaluating managers and leaders across the company with respect to their compliance with our processes for evaluating claims and imposing appropriate consequences. And we will be adding resources to ensure and enhance our consideration of diverse candidate slates for all open positions. The leadership of the company is committed to creating the most welcoming, comfortable, and safe culture possible.”

Meanwhile, a slide going over steps being taken to ensure improved working conditions was also included in the company’s fiscal presentation. You can view it below.

Yesterday, Blizzard president J. Allen Brack stepped down from his position and left the company in light of the ongoing controversy. Read more on that through here. 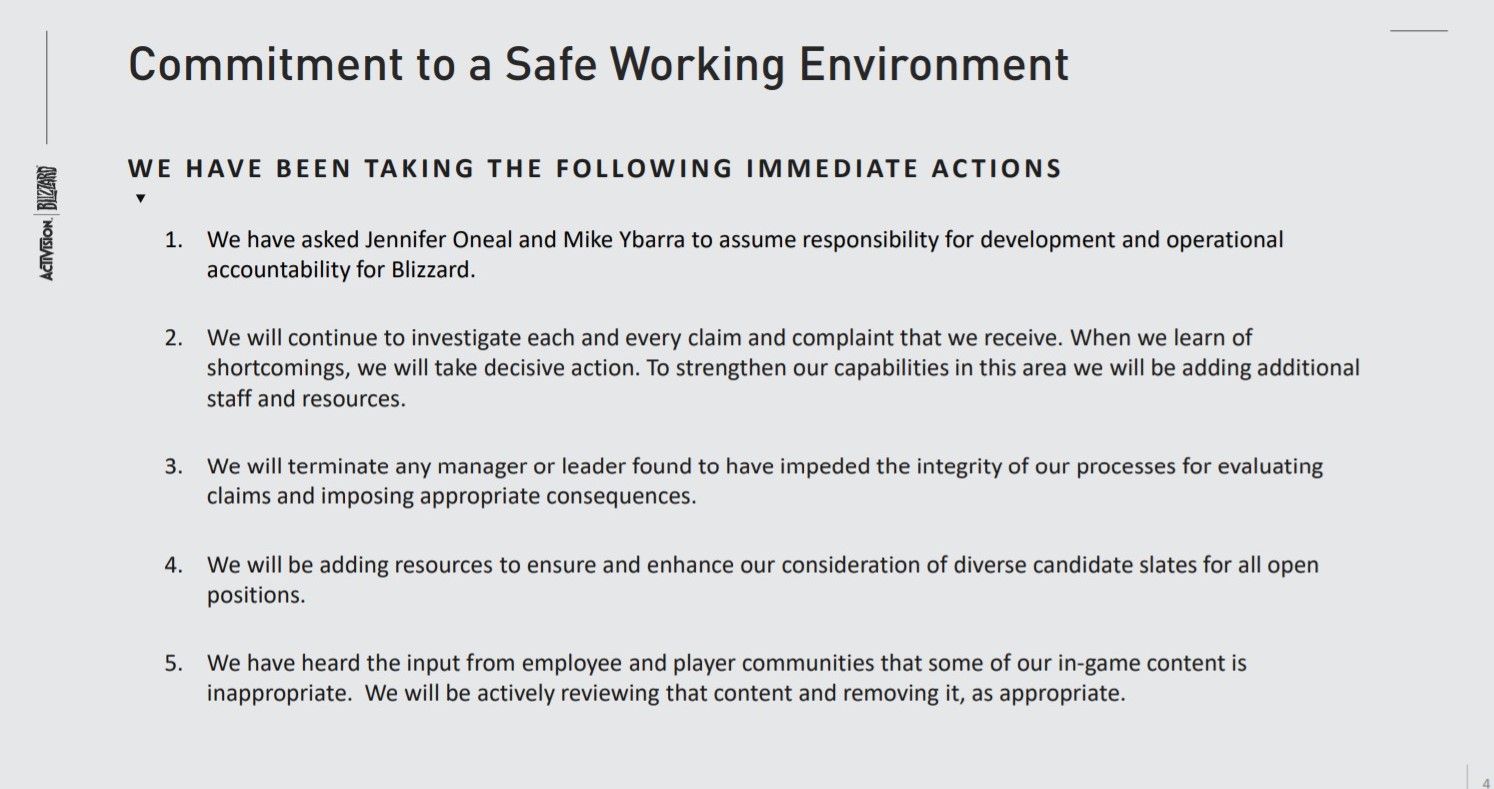