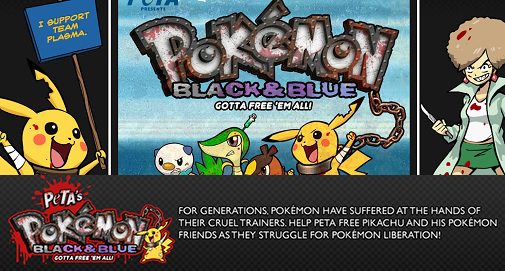 After targeting Mario recently with the ‘Mario Kills Tanooki campaign’, PETA have done it again and have gone after Pokemon. Their latest mantra? “Gotta Free them All”. Of course, it’s a twisted version of “Gotta Catch them All”.

They have created a flash game which will weaken your mind, and it’s the classic PETA style of getting their point across. Here’s what they had to say about this, which is ludicrous and hilarious at the same time:

The amount of time that Pokémon spend stuffed in pokéballs is akin to how elephants are chained up in train carts, waiting to be let out to “perform” in circuses. But the difference between real life and this fictional world full of organized animal fighting is that Pokémon games paint rosy pictures of things that are actually horrible.

Earlier, this was their justification for going after Mario.

“Tanukis are real-life raccoon dogs who are beaten and, as PETA’s undercover exposés show, often skinned alive for their fur,” says PETA Executive Vice President Tracy Reiman. “This winter, everyone can give raccoon dogs and other fabulous animals a 1-UP by keeping our wardrobes fur-free.”

The Mario game is available here.You can play the Pokemon game over here.