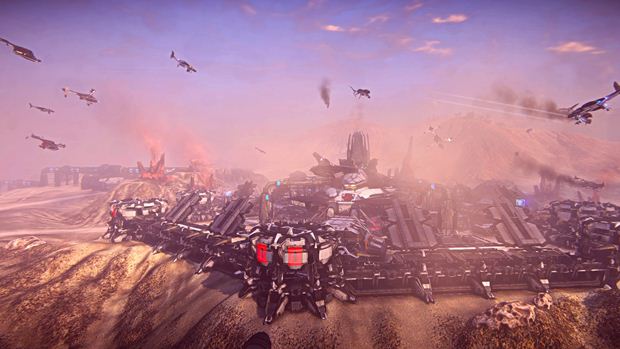 Planetside 2 is a graphically intensive game on the PC; so when Sony Online Entertainment announced that they would be bringing it over to the PlayStation 4, people were excited to see how well the graphics would translate to the console, which, while powerful, still does not afford the kind of resources and flexibility that a PC development environment does.

And that is exactly what the developers have now confirmed- that the PS4 is proving to be harder to work with, mostly because the CPU, which is fairly weak, is a bottleneck.

“Our real bottlenecks are on the CPU side. From a graphical fidelity perspective, people will be impressed with what they see on the PS4. That’s always one of those things people are skeptical about. I see every time we post an article like this I always get called out: ‘haha, it’s bullshit he’s saying it’s going to look as good.’ It really does,” said creative director of Planetside 2, Matt Higby in an interview with Eurogamer.

“Again, the graphical fidelity is every bit as high. The slowdowns we have are on the CPU side more than the GPU side. It’s because we’re tracking and updating so many different players moving on your screen and moving around at once. All that animation and all the audio that’s associated with all those characters running around, all of their projectiles being simulated in their client, all those things end up hitting the CPU, not the GPU.

“So, generally when our frame-rates are low, it’s a CPU problem, not a GPU problem. And that’s where we’re optimzing right now, to get our CPU running faster so the game is running at a more consistent frame-rate on the PS4,” he concluded.

That said, they are still aiming for 1080p/60FPS on the console, although they admit that if they have to compromise, they will. Sadly, it appears that said compromise will be made for framerate, not resolution, which makes no sense for a game like Planetside 2 for me, but what do I know anyway.

“Right now we’re running for 1080p. We’re still trying to shoot for 60fps. We’re trying to get a solid frame-rate. So if we go to 30 it’ll be because we want to maintain a completely solid 30fps. But that’s the optimisation we’re working on right now. And we’re still grinding on it,” he said.

Alright. I just hope they didn’t bite off more than they can chew with the port, and that we can expect a PS4 version every bit as great as the PC version.