To read about the differences between the PS3 and Vita version, scroll down to the bottom of the review.

We all know just how much PlayStation All-Stars Battle Royale was compared with Nintendo’s Super Smash Bros. series before its release. And seriously, who can blame people for making the comparisons? Super Smash was clearly the inspiration- or competition- in Sony’s mind when they actually started working on the game. But while Nintendo’s Smash Bros. games are incredibly fun and absolute masterpieces, Battle Royale fails to impress in any way possible and comes across as bland and boring.

There’s a slew of options in Battle Royale to choose from. You can attack other characters using three of the face buttons, and change what the attacks result in by adding direction to them with the left analog stick. Add in elements like rolling, blocking, jumping, supers, combos, throws and so much more, and Battle Royale actually gets a bit too complex. 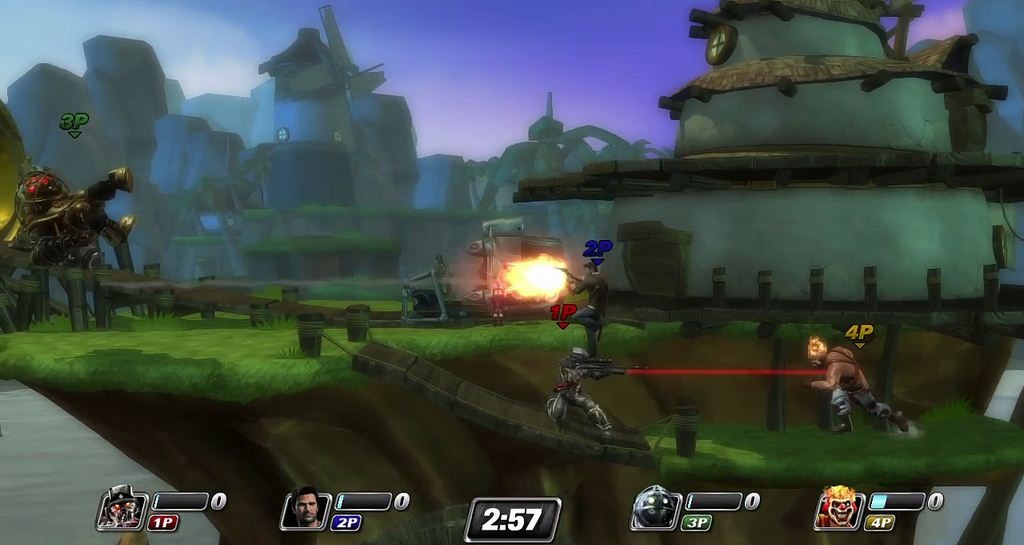 Now, don’t take this as some sign of me being a novice when it comes to fighters. I’m the kind of guy who loves playing games like Super Street Fighter and Marvel vs Capcom 3 for hours at length, but the thing is, being complex just doesn’t suit Battle Royale, and somehow, it doesn’t pull it off very well. The tutorials are all really good, but the game does have a steep learning curve. If this were just any other fighter, I’d have no problem with that. Hell, I’d expect it to have a steep learning curve.

But Battle Royale is, on the outside, a charming, accessible, fun, pick up and play fighter, boasting of the brand of fighting that would appeal to all crowds at the same time. The deep complexity of the hardcore fighting genre does not belong here.

What does belong is a great character roster, no matter what kind of fighter the game is. Unfortunately, Battle Royale’s roster is a hit and miss. While it includes some very lovable Sony characters like Nathan Drake and Kratos and Sackboy and even Fat Princess, the roster is small at just around twenty characters, and notable Sony icons like Nathan Halo or Sev are missing. And who’s to say you can only have the main Sony guys? I’d love to play as Sully or Ares or Captain Qwark. There are a few third party entries here, since, let’s face it, Sony’s character lineup does not (yet) have the depth that Nintendo’s does, and you’ll be seeing people like Raiden from Metal Gear Solid and Big Daddy from BioShock on the maps often.

And again, the problem arises- none of Sony’s characters are as iconic or as recognizable as, say, Mario or Pikachu. None of them have the rich history to themselves as Link does, and none of them has yet achieved the mysterious heights of Samus. It’s unfair, really, to criticize Battle Royale for something like this, but given its competition, it’s a necessity.

But make no mistake- once you see Kratos and Drake and Ratchet and Dante battling it out in PaRappa the Rapper’s dojo house, you’ll forget how not-so-iconic these characters are, because let’s face it- who doesn’t want to see Dante’a ass getting handed to him by Kratos, or Ratchet burying his weapons in Drake’s backside? Once you crank up the difficulty and actually get the hang of the controls and how to chain together some sweet combos, you actually start having fun.

When that starts getting repetitive- and it does, after a while- you can always jump online and beat the hell out of friends in local multiplayer or strangers around the world. Multiplayer, of course, is a hell lot of fun, and just like any other fighter, it’s in the multiplayer that Battle Royale’s strengths truly lie.

And the maps that we fight on are good enough to support all that crazy, chaotic fun- even enhance it. Maps, as you may have expected, are dynamic. So while in the middle of  fight, you’re probably worrying about your foes’ attacks and Level 1, 2 or 3 supers, you might also have to worry about the creepy huge girl in the background shooting huge, nuke sized missiles at the entire map to take out entire sections, or worry about disappearing and animating platforms. It’s really, really fun to see how the maps change and how you have to interact them to maybe even use them to your benefit. And getting to see maps from old games we love (or not so old games) and ones that haven’t even come out yet (BioShock Infinite’s Columbia) is always a treat.

It’s a shame, then, that the visuals can’t help these maps transcend to an all new level. The visuals, while perfectly serviceable, are rough and messy, and character models don’t look all that good. The soundtrack, too, is largely mediocre, with few memorable Sony themes recurring here.

Surprisingly, PlayStation All-Stars Battle Royale is a much better experience on the Vita than it is on the PS3. For one, just because the OLED screen of the handheld is so damned beautiful, the visuals just pop out and look that much crispier and prettier. The entire game is better suited to a handheld as a whole- the relatively small roster of characters of Battle Royale doesn’t seem quite so small when you put it into perspective in the handheld market. Plus the fact that if you already have the PS3 version of the game, you can get the Vita version for free makes the deal that much sweeter. Because cross play between the Vita and the PS3 is a joy, whether you play it solo or with a friend.

In the end, nothing really works out well enough for PlayStation All-Stars Battle Royale to achieve the heights it aspires to. Cross platform play between the Vita and the PS3 are neat and interesting mechanics, but none of what All-Stars does ever exceeds a level of mediocrity, and it always feels flat and… soulless. So while in technical terms, there’s not much wrong with Battle Royale, in the end, as a game, it fails to impress you.

Less than memorable soundtrack; Unimpressive visuals; Character roster is small and missing notable Sony characters; Too complex for its own good

Final Verdict:
FAIR
In the end, nothing really works out well enough for PlayStation All-Stars Battle Royale to achieve the heights it aspires to.
A copy of this game was provided by Developer/Publisher/Distributor/PR Agency for review purposes. Click here to know more about our Reviews Policy.