The tech will take advantage of room-scale experiences 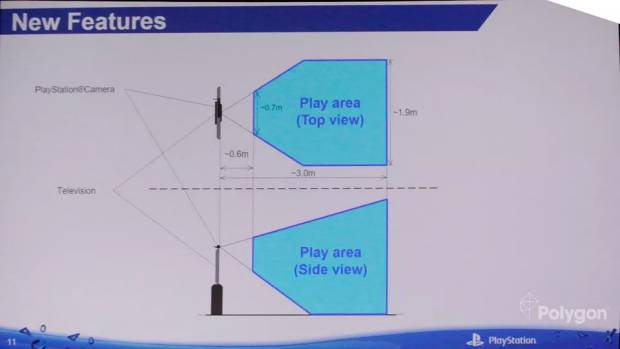 Sony has been talking quite a bit about its Playstation VR at GDC but one of the best pieces of news for those who want to get as much enjoyment possible out of the device is that the tech will be taking on room-scale experiences. We know that the device is going to cost about $399 and that doesn’t include the $60 PlayStation Camera. When you do in fact use that camera, you are actually able to use a rather large portion of the room in your VR wanderings.

Polygon got ahold of a slide from Sony’s GDC presentation that showed how much play area users are going to get with Sony’s version of the technology. “It’s very important to clearly define the play space the player is going to be playing in … we want to make sure that your play area is kind of a sacred space, because you’re going to be flailing around, jumping, having fun,” Chris Norden, senior staff engineer at Sony said during the talk. “And the developer should have complete freedom to choose how they want to define the play space. So if you want to have a smaller area, if you want to be seated, if you want to be standing, if you want to have people move around that’s great.”

The tech is going to alert players when they are out of the zone. The best news about this is that it would seem this rather large playable space means it will be that much easier to port games from other VR platforms such as the Vive and Oculus Rift. The tracking space is big enough to acomodate what those devices need. We’ll likely know more when Sony talks more about their device as the year goes on.