Since its explosive launch, Pokemon GO has gone on to enjoy incredible success, and even with a few dips here and there (especially for a perod after its release), on the whole, the game has been a major money-printing machine for The Pokemon Company. 2019, for instance, was its biggest year ever in terms of revenue generated, and now that record has been toppled with its very next year.

As per SuperData’s newest report on the games industry’s digital side of things for all of 2020, Pokemon Go beat its 2019 revenue generation convincingly, with twice as much revenue raked in. The game made $1.92 billion across 2020, up from $894 million in 2019. It was also the fifth highest grossing free-to-play title of the year, behind Honor of Kings, Peacekeeper Elite, Roblox, and Free Fire.

This is particularly impressive given the fact that Pokemon GO is a game that tends to rely entirely on outdoors activities and social interactions, both of which were stifled almost completely in 2020 due to the COVID-19 pandemic. Of course, developers Niantic introduced significant changes to the game in response to the pandemic to allow players to enjoy it from their homes, which contributed significantly to its massive revenue numbers. 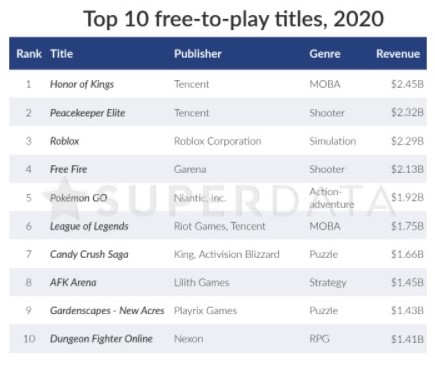