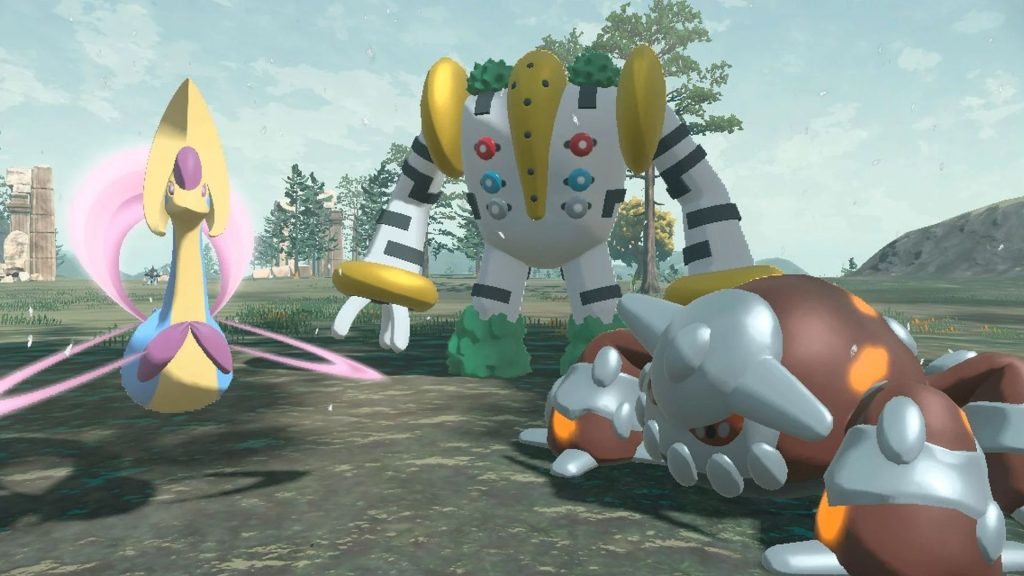 Another series of “Plate” style missions in Pokemon Legends: Arceus involves capturing the likes of Heatran, Regigigas and Cresselia. Let’s go over the steps for finding each, starting with Heatran. As part of “The Plate of the Firespit Island” mission, you obviously need to travel to Firespit Island. Once you reach the volcano, head inside and you’ll face Heatran.

The battle doesn’t start immediately. First, you need to remove Heatran’s shield – this can be done by throwing Mud Balls at it (which are present throughout the arena). After the shield goes down, start the battle. Heatran is level 70 and has skills like Iron Head, Crunch, Earth Power and Magma Storm. Bring Water, Ground and Fighting Pokemon to subdue it.

How to Catch Regigigas

The next mission is “The Plate of the Snowpoint Temple”, which involves traveling to Snowpoint Temple. Vetnrue to the basement and use the Iron Plate, Icicible Plate and Stone Plate to open the door. Regigigas will be waiting for battle. It’s level 70 and possesses skills like Zen Headbutt, Iron Head, Crush Grip and Giga Impact. It’s weak to Fighting Pokemon only so bring a few along.

How to Catch Cresselia

Cresselia is part of the mission “The Plate of the Moonbreak Arena” which, once again, is available after the main story is complete. Upon receiving the mission, head to Moonbreak Arena. You’ll encounter Melli who asks for your help. Proceed further and battle against Cresselia. It’s level 70 and possesses skills like Recover, Psychic, Lunar Blessing and Moonblast. As a Psychic type Pokemon, it’s weak to Bug, Ghost and Dark Pokemon.

Contrary to the above, Shayman can be obtained by those who have save data for Pokemon Sword and Shield. You’ll get the Request “A Token of Gratitude” and must meet with Medi in the camp. Upon receiveing a Gracidea, you’ll travel to the Floaro Gardens. Medi will then appear and calls upon Shaymin. It’s at level 70 and possesses skills like Recover, Energy Ball, Earth Power and Seed Flare. Since it’s a Grass-type, Flying, Poison, Bug, Fire and Ice type Pokemon will be most effective while battling it.