These optional scenes may very well be among the best moments of their games.

Even without the usual suspects and their open-world checklists, this year saw some massive destinations to get lost in.

Santa Monica Studio's sequel is the second biggest boxed game launch in the UK this year, with 51 percent higher sales than its predecessor. 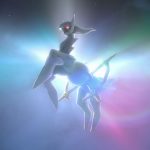 Pokemon Legends: Arceus and Elden Ring Were the Highest Selling Games in Japan in February

Once you've completed the story, there are lots of different Pokemon to find in Hisui. Here's how to capture four Legendary and Mythical Pokemon.

25 years of Pokemon, and some very, very good games.