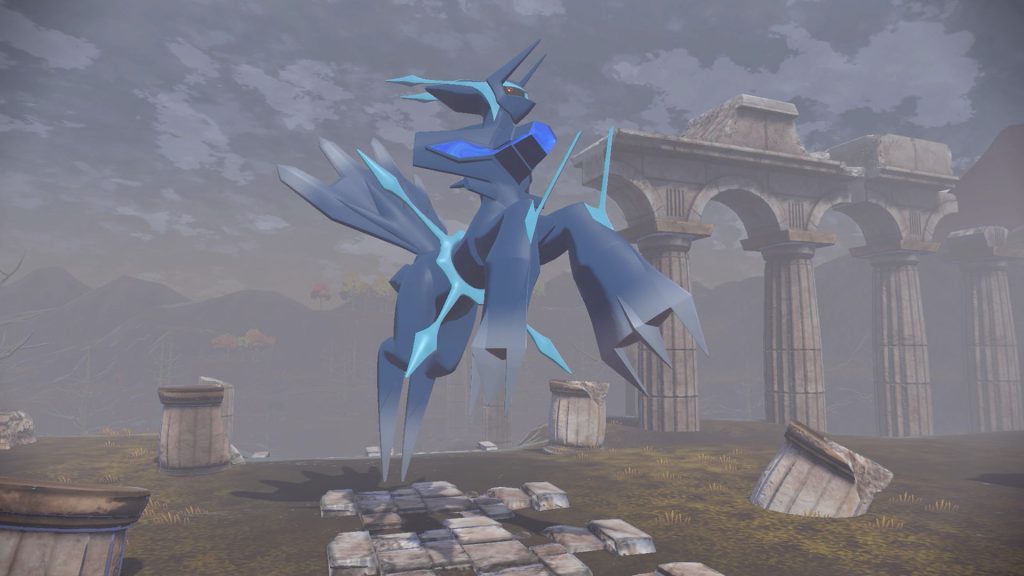 Dialga and Palkia from Pokemon Diamond and Pearl appear in Pokemon Legends: Arceus, and are actually two Legendaries that can be captured during the main story. There is a catch though. They’re essentially the final bosses (story-wise at least) and encountered in the Temple of Sinnoh. You’ll receive a mission to locate the Red Chain and are subsequently faced with joining either Clan Adaman or Clan Irida. These represent the Diamond and Pearl games of yore – joining the former means you’ll get to capture Dialga. Join the latter and Palkia is yours.

Once you’ve made your choice, venture to the Temple of Sinnoh. You’ll face your chosen Pokemon in a regular battle and be able to capture it. However, the second Legendary will then appear in its Origin Forme. Defeating it requires dodging attacks (which are roughly the same for both). You’ll need to watch out for Draco Meteor which has a large radius, shockwaves and rings of fire which can persist in the arena.

Keep moving in the fight, ensuring that you time your rolls with the first two attacks. The third involves being aware of the fire’s placement and not getting caught while running. Throw Balms and eventually the Origin Ball to capture it. Again, this is the Origin Forme of the Legendary in question – capturing its non-Origin Forme requires picking the other clan.

How to Catch Giratina

This is part of the request “On the Trail of Giratina” which is available in the post-game. However, first you need to finish the mission “Seeking the Remaining Plates.” Upon catching Uxie, Mesprit, Azelf, Heatran, Regigigas and Cresselia first, you’ll battle Volo in the Temple of Sinnoh.

Defeat him and go to Jubilife Village where Professor Laventon will give you the request “On the Trail of Giratina.” Venture to the Cobalt Grasslands, on the the Spring Path. Climb the mountain and at the peak, you’ll find an entrance into Turnback Cave where Giratina awaits in its Origin Forme. It’s level 70 with attacks like Dragon Pulse, Dragon Claw, Earth Power and Shadow Force.

Carry plenty of Ultra Balls along with Pokemon that are strong against Ghost/Dragon-Type Pokemon. Upon catching Giratina, you’ll receive the Griseous Core for switching between its regular and Origin Formes.

How to Catch Darkrai

Darkrai actually isn’t available to capture unless you have save data from Pokemon Brilliant Diamond and Shining Pearl. If you do, venture to Survey HQ and check the board for the “The Darksome Nightmare” request. You’ll need to go to the Clamberclaw Cliffs at night. Darkrai will ambush you…but then run away. Don’t blindly try to chase or throw PokeBalls – it will simply disappear and reappear somewhere else.

Instead, sneak behind it using the surrounding rocks and throw a Pokemon at it. Once it’s stunned, you should be able to battle and capture it. Alternatively, once it reappears, throw a Pokemon once it starts screaming. This should also initiate the fight.

Darkrai is level 70 with attacks like Nasty Plot, Dark Pulse, Psychic and Dark Void. Since it’s a Dark-type, Fairy Pokemon are very useful for this fight.