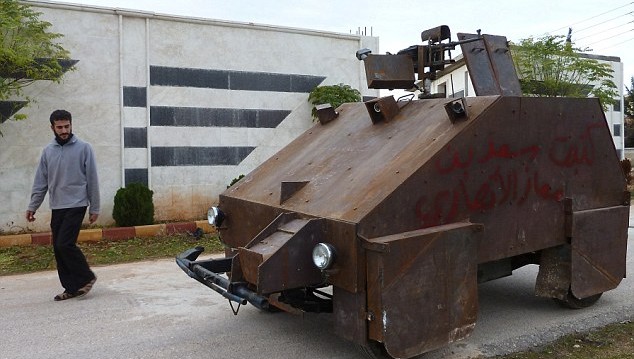 For those who didn’t know, Syria is quite the pissed off nation these days, with rebels facing off against the Asad regime. Though they lack the resources, that hasn’t stopped them from improvising and building, say, tanks of their own. Especially when said tanks are operated using a Playstation controller. We wish we were making this up.

But no, this is real according to France24. Named the “Sham II”, the “tank” has an old diesel car’s chassis with five cameras mounted on the outside and a machine gun on a turning turret. On the inside are several flat screen displays mounted on opposite ends, with the driver sitting on, controlling the tank with a steering wheel while a gunner is at the opposite end, aiming said machine gun with a Playstation controller. One wonders if they get force feedback as well.

Honestly, this isn’t too big a stretch of the imagination. Remember when Playstation 2 consoles were suspected of being powerful enough for missile launches?