Thanks to the recent teardown video, we know much more about the PS5's hardware.

Sony are kicking the marketing for the PS5 into gear, as they should, with the console’s launch just around the corner now. Recently, they released a detailed teardown video, in which they offered an extended look at the PS5’s hardware, its insides, and how various functions works.

In this feature, we’re going to talk about ten of the biggest details we learned from the teardown video. Let’s start with the external elements first. 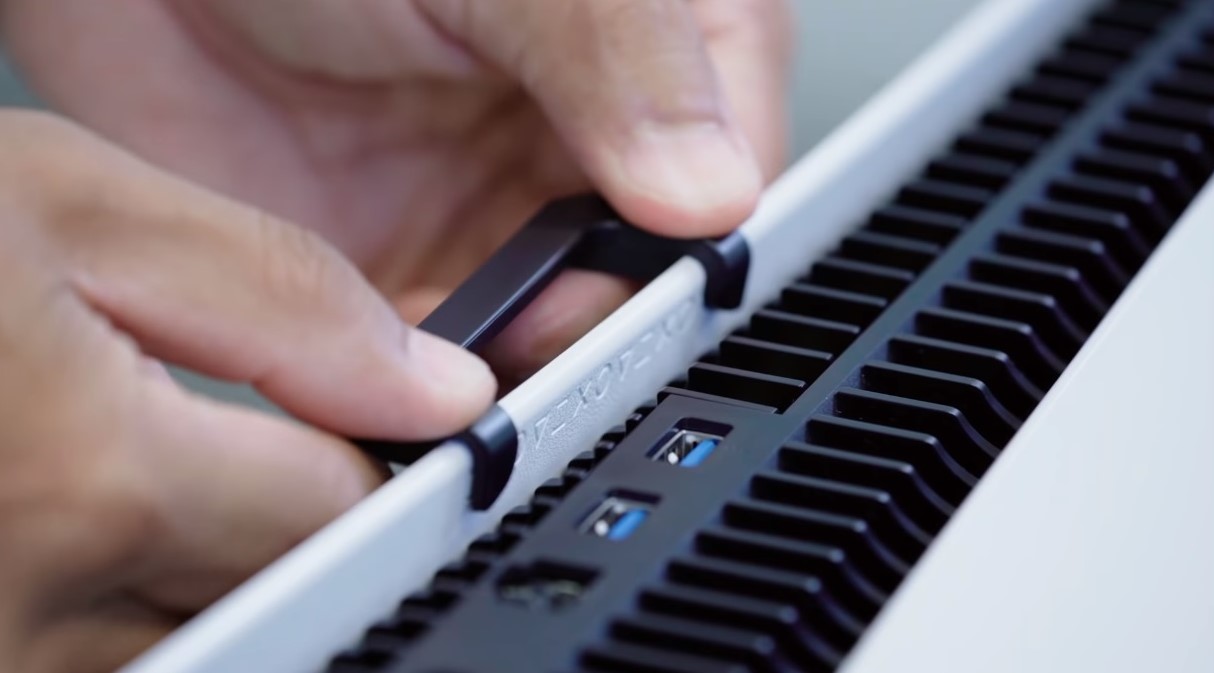 We’ve known for a while that the PS5 will come with a stand that will allow users to place the console both vertically and horizontally, but we now know how the stand will work as well. When holding the console vertically, it will keep it in place with a screw at the bottom. To place it horizontally, you can store the screw in the base itself, then align the stand with the marks on the back of the console and clip it on. Based on the video, it seems like a rather simple process. Hopefully, the stand will be sturdy regardless of how it is used. 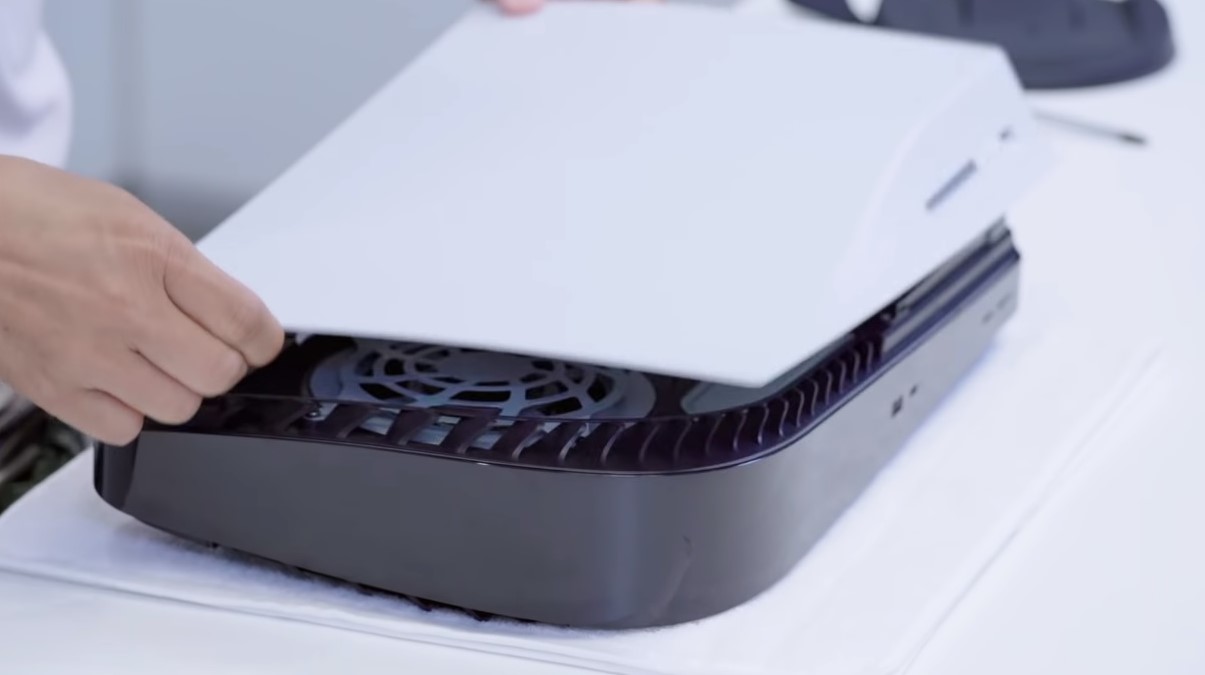 This is something that we’ve more or less known about for a while, thanks to a couple of leaks in recent weeks, but now Sony have officially confirmed it. The PS5’s side plates will be detachable, and if what was shown in the teardown video was anything to go by, it’ll be pretty easy to do. Now, Sony haven’t really said anything else about this topic, but there’s some very clear and exciting potential here for custom or themed side plates that you could purchase the customize your console down the line. Hopefully, Sony will agree with that notion, because the idea of decking out your PS5 with custom side plates is an exciting one. 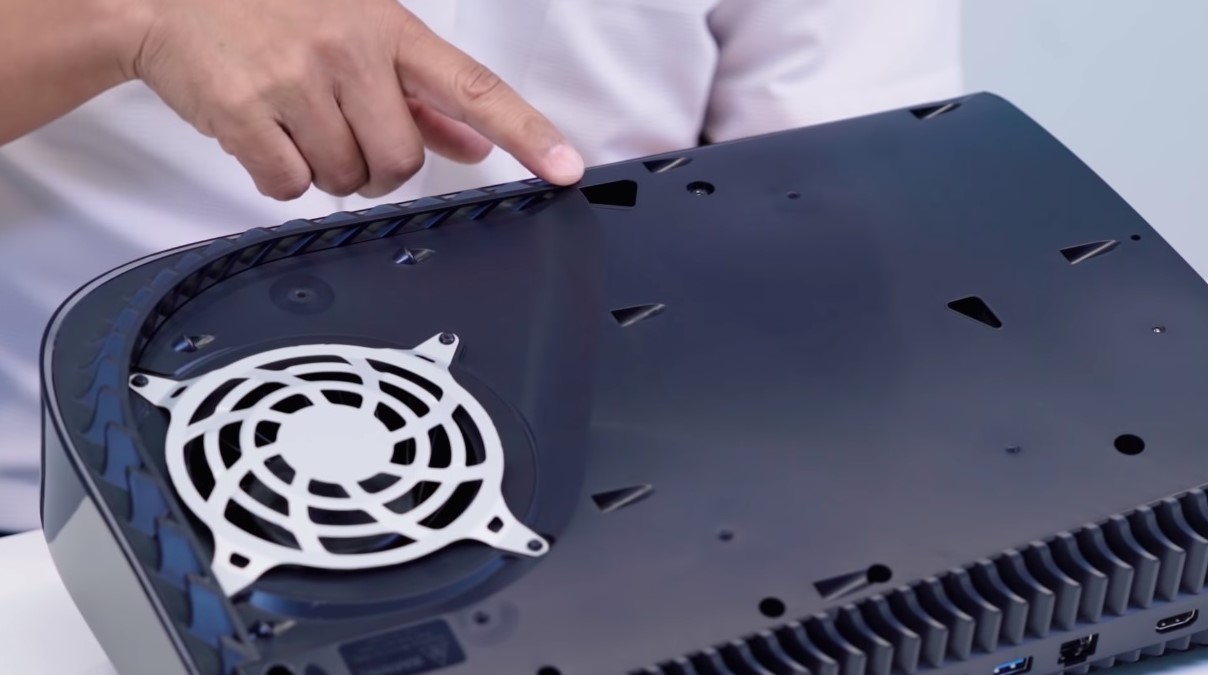 One interesting detail that was shown in the beginning of the teardown video was that the PS5 has two dust catchers on its side. Any dust that is collected in these dust catchers can also be vacuumed out through two other holes. A disclaimer toward the end of the video does say that the dust catchers won’t guarantee that your console will remain clean- but it’ll certainly help keep it clean a little longer than usual. 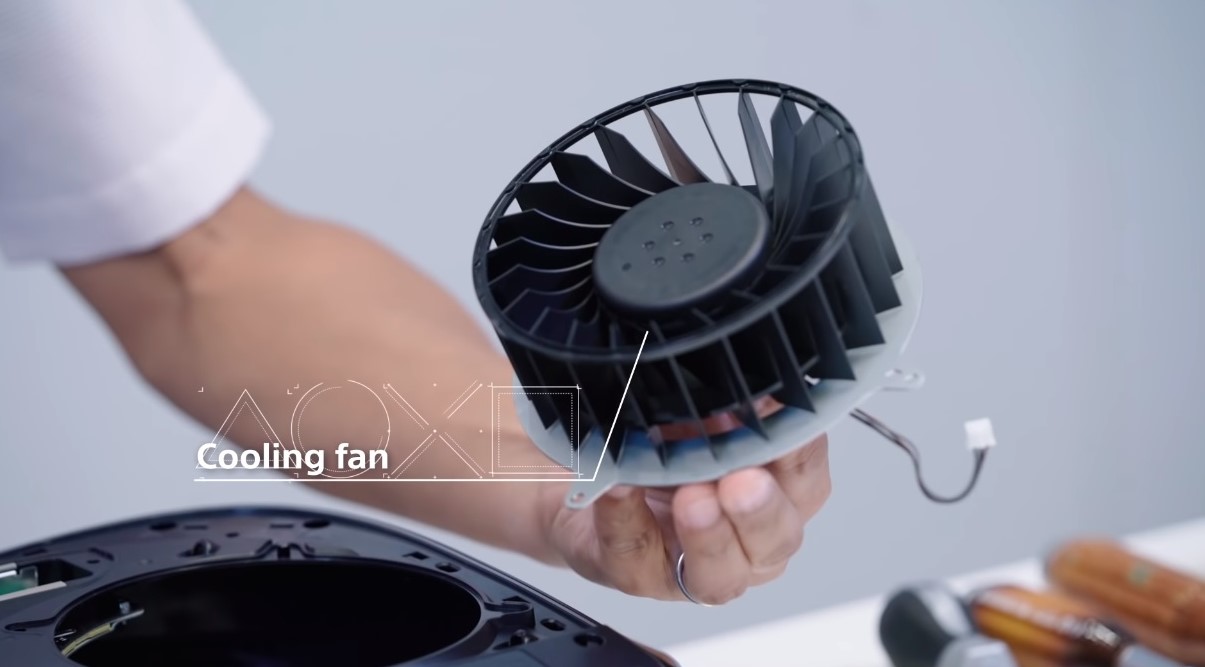 There have been quite a few eyes on Sony and how they will tackle the cooling solution for the PS5. That’s not only because of the extremely loud PS4 and PS4 Pro, but also the fact that reports had been suggesting that Sony had invested quite a bit of money in a cooling solution for their next-gen console. Based on recent impressions, it’s looking like that’s paid off, and in the teardown video, we got a look at how it will work as well. The PS5 has a double-sided air intake fan that’s 45 mm thick and has a 120 mm diameter. To say that the fan is large would be an understatement, but hey- as long as it works. 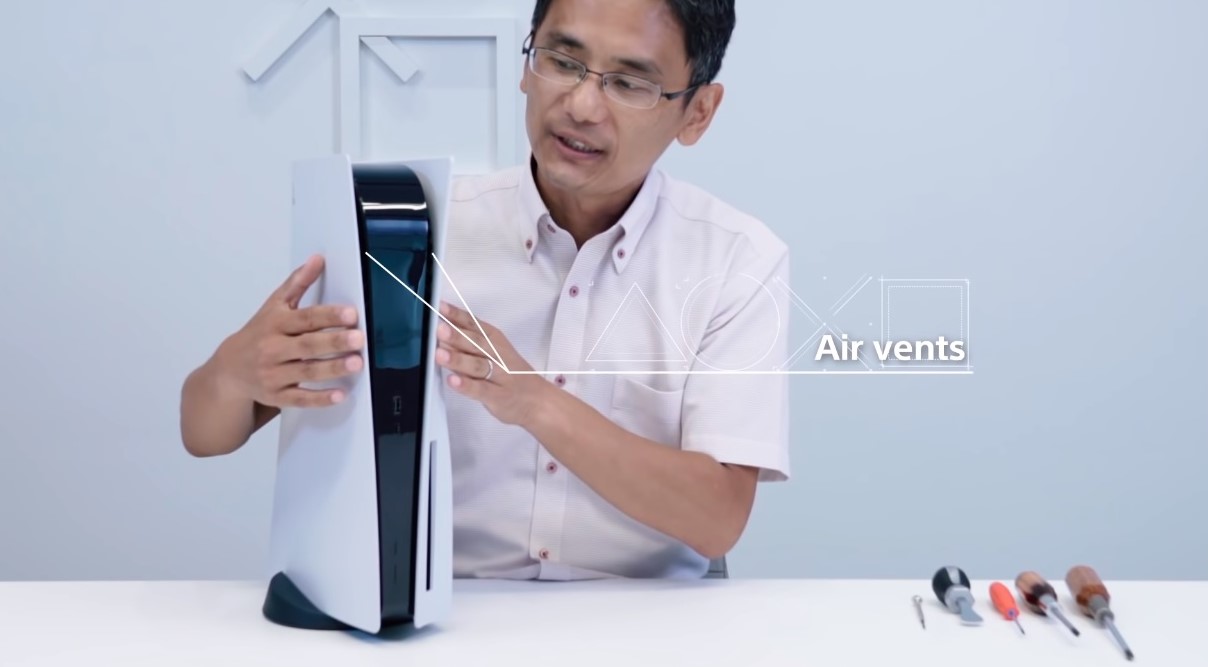 There’s a few other things to the PS5’s cooling system beyond the fan. Such as its ventilation, for instance. And we now know exactly how that works as well. The entire front of the PS5 along the side plates has air vents. Meanwhile, the entire rear side of the console has an exhaust port. As mentioned earlier, recent impressions have suggested that the PS5’s cooling is pretty quiet, so it’s good to know that the fan and the vents and exhaust seem to be working well together. 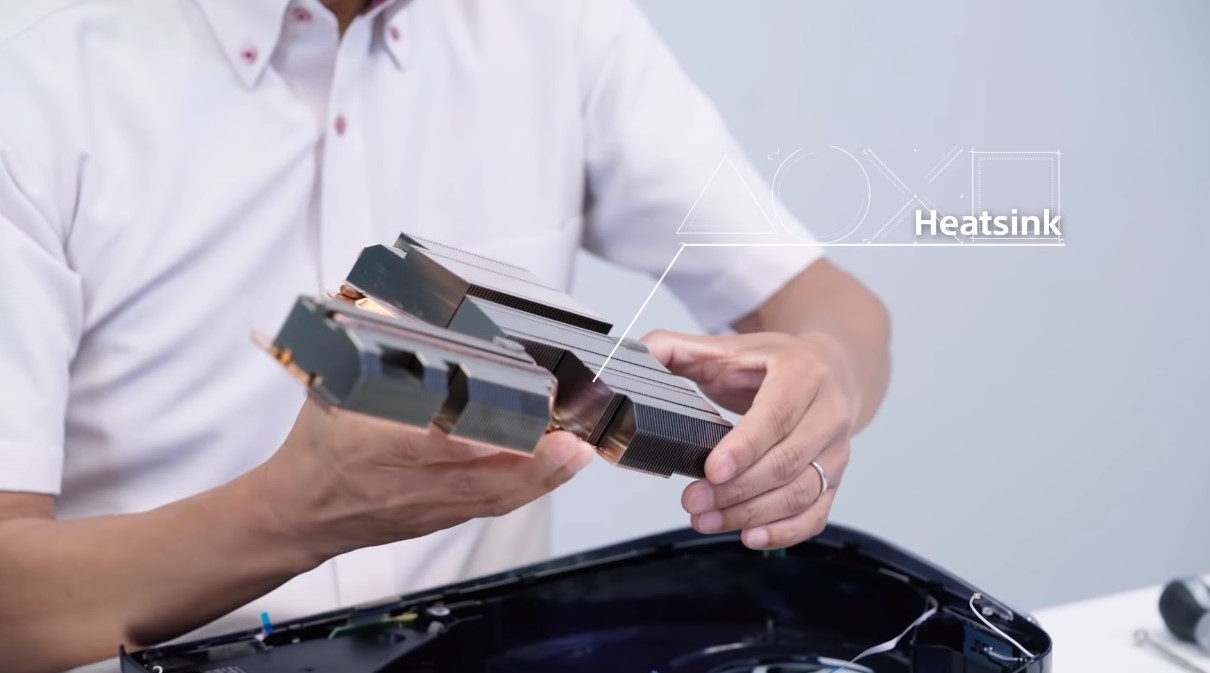 One look at the PS5’s heatsink immediately tells you why the console is as large as it is. Combined with the cooling fan, it pretty much defines the console’s shape and size. The PS5 has a heat pipe-based heatsink, though Sony have made to its shape and airflow to achieve the same performance as a vapor chamber. It’s another piece in Sony’s elaborate cooling puzzle for the PS5, and based on early impressions, it seems equipped for the task. 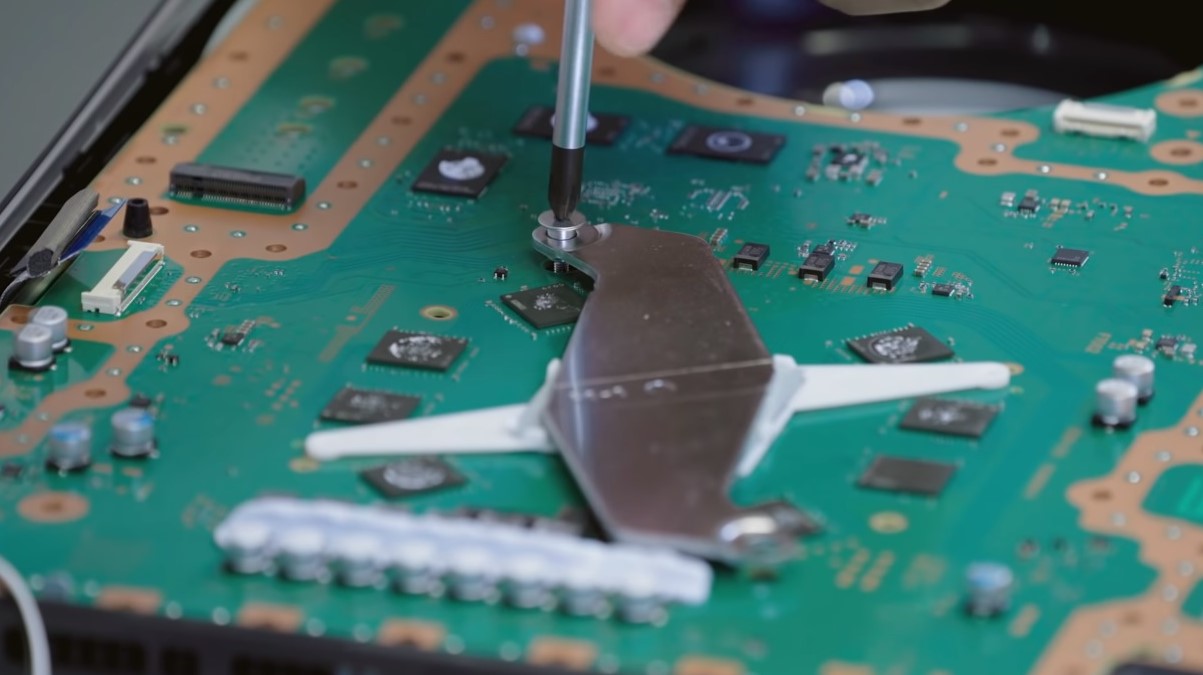 Additional details on the PS5’s AMD Zen 2 processor chip were also revealed in the recent teardown video. As Sony’s engineering vice president Yasuhiro Ootori explained in the video, the PS5’s SoC is a small die that runs at a very high clock rate, which produces plenty of heat, as you’d expect. To improve the performance of the thermal conductor and deal with that heat, Sony have gone with an interesting solution. Let’s talk about that for a little bit… 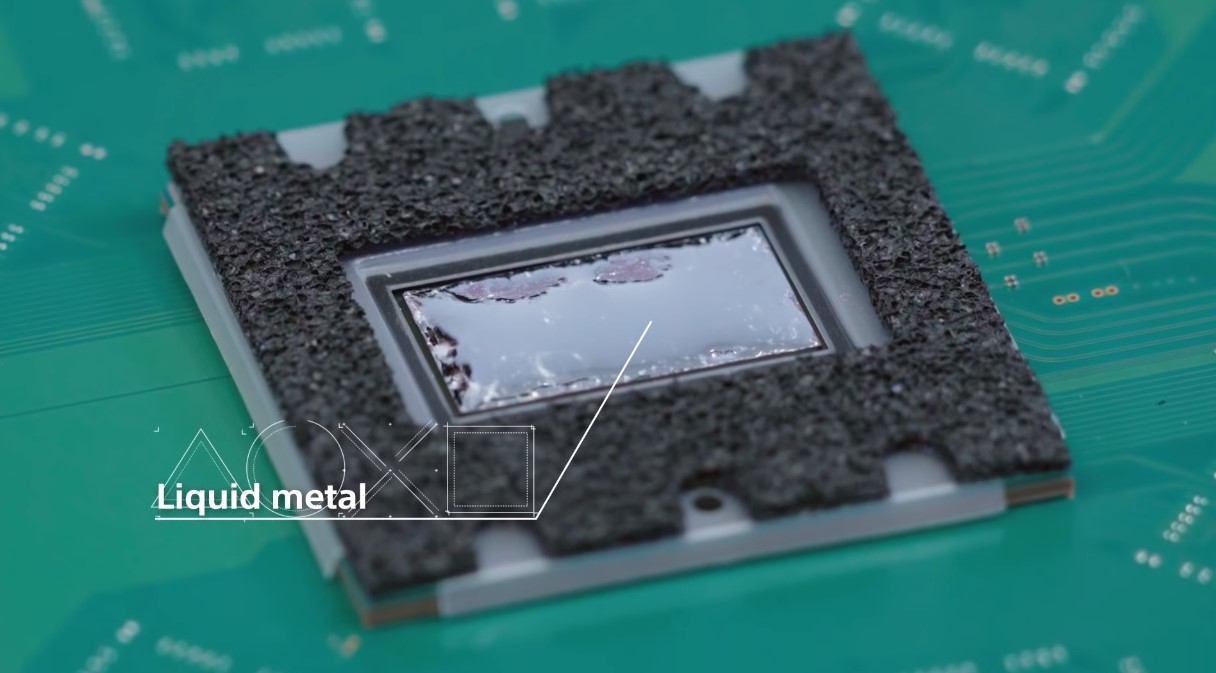 Instead off a paste-style thermal interface material (or TIM), which sits between the SoC and the heatsink, Sony have opted to use liquid metal for the cooling in the PS5. As Ootori explained in the video, the liquid metal TIM will “ensure long-term, stable, high-cooling performance.” Sony also explains that it has been conducting tests and R&D work on a liquid cooling solution for two years, which means they should (hopefully) be well-positioned to avoid the sort of issues that usually come with liquid metal cooling. If nothing else, it’s indicative of the unusual cost that Sony seem to be putting into the console’s cooling system, which is certainly encouraging to see. 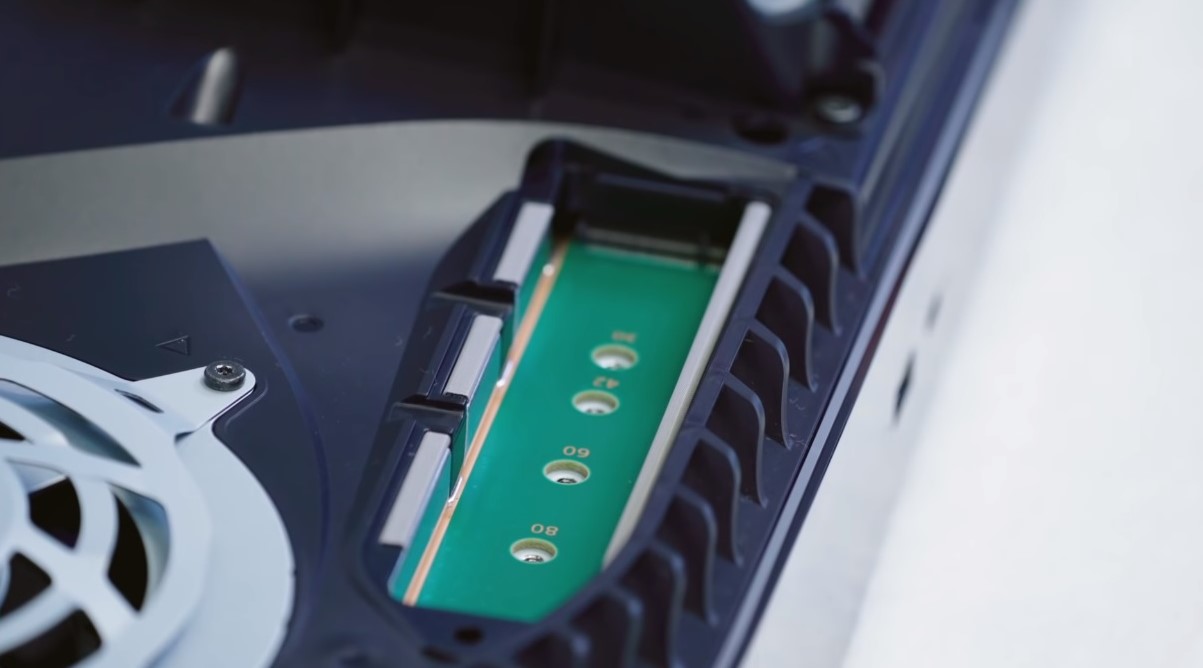 We have now also had our first look at the PS5’s expandable storage. The console has a slot on its side once you remove the panels, and shows an NVMe M2 SSD expansion slot. Sony have previously said that the PS5 will feature support for off-the-shelf SSDs– though there’s not a lot of SSDs on the market just now that match up to the PS5’s speed requirements. Hopefully, it won’t take too long for more options to become available. 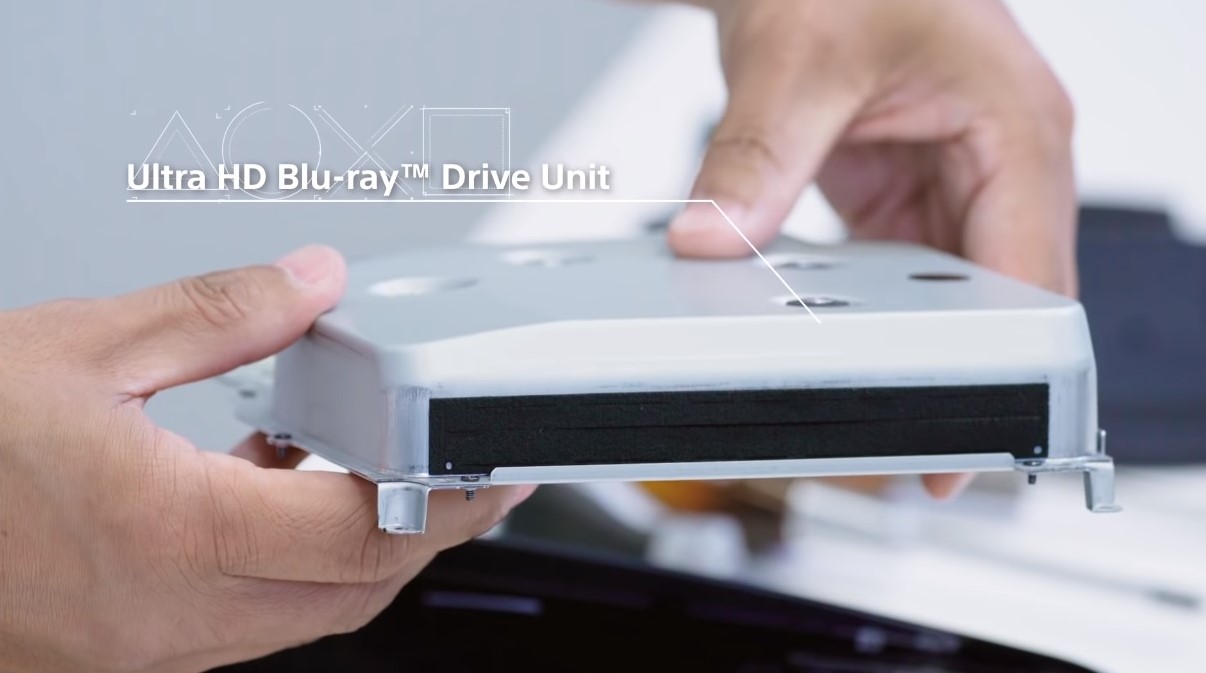 This, of course, is not applicable to the PS5 Digital Edition. The ultra HD blu-ray drive that will come in the other PS5 model was shown off in the teardown video as well. The drive has been designed to reduce noice and vibration when a disc is spinning inside thanks to two layers of insulators and a sheet metal case. The drive is also quite thick, which, of course, explains why the PS5 Digital Edition is noticeably slimmer than the PS5 console with a disc drive.