Resident Evil 2 is back and it’s trying to terrify you in all new ways.

After a really long wait, Resident Evil 2 returns. But don’t call it a remake, but rathe it feels like a mix of remake and reimagination. It also feels like the best third-person Resident Evil game since Resident Evil 4, and it just so happens that Leon Kennedy is also the star of that game, as well (along with Claire Redfield). We had a chance to ask some nagging questions about the game to Mike Lunn, Brand Manager for Capcom, at this year’s E3. Check out our full intereview below.

What was behind the decision to make the Resident Evil 2 with a behind the shoulder approach, as opposed to the original’s fixed cameras?

This isn’t just a remake. Obviously were using Resident Evil 2‘s source material from the original PlayStation for the basis of what we’re using for this game. But it’s an all new game on top of that. If you played it before, there’s going to be a lot of new stuff that you’re not going to expect. We’re going to switch up puzzles, we’re going to switch up enemy locations, and it felt right to change the perspective as well. On top of building an entirely new game from the ground up in the RE engine, we really wanted to try something new, and it felt right to change the perspective. Obviously back in the day with the PlayStation One there were limitations, and that’s why we went with that perspective. We understand that people loved it too. But we just felt that it was right for the vision that we had for this game.

Given the switch in perspectives with RE2 2019, is that going to have any sort of impact on how the game plays itself? Can we expect any new mechanics in the game that weren’t in the original, or conversely, are they are aspects of the original that had to be cut from RE2 2019 as a product of the new camera?

It certainly will. It’s still a survival-horror game. People always think that as soon as it goes over the shoulder, it’s a Gears of War type game. You’re still going to be super conservative on ammo. You’ll need to craft; something we’re adding, too, like crafting like in Resident Evil 7. So you can add more bullets, build healing items. But what it does is that it enhances immersion. For example, over the shoulder — when you get grabbed by a zombie, the camera pulls in and it makes it feel like it’s actually biting you in the neck. It feels like you’re in there. As opposed to just seeing Leon in the corner of the screen, like, tussling with a zombie. We feel that over the shoulder thing is [great].

As long as we’re talking about a change in perspectives, given how successful RE7’s first person perspective was, was there ever a time during development when you considered that for RE2 2019 as well?

I bet it was tossed around at some point in time, because it’s built on the same engine as RE7 engine. It’s built from the ground up, but I don’t think it was ever top running. We have toyed with things like the over the shoulder camera, old school corner camera, but again they went with over the shoulder because it felt right for this product.

"It’s still a survival-horror game. People always think that as soon as it goes over the shoulder, it’s a Gears of War type game. You’re still going to be super conservative on ammo. You’ll need to craft; something we’re adding, too, like crafting like in Resident Evil 7."

How much is RE 2019 going to stick to the original? In terms of level design, is it a faithful 1 to 1 remake of the original RE2, or is it more of a retelling, with some of its own stuff added in?

It won’t be faithful one to one. For someone that’s played the game, some people played it once and some people played it a thousand times because it’s their favourite game. For the people that have even played it a thousand times, we wanted it to feel fresh. That’s why we don’t call it Resident Evil 2 Remake. It’s a new game built on top of the foundation. So for example, there is a part where you’re walking through the police station, and a lurker walks by the window.

In the original game that happens every single time. We don’t include that because of the jumpscares, the puzzles, and because we want you to be challenged by that stuff. We want you to be scared by that stuff, not just repositioned to a new part of the building, but sort of reimagined. Because we don’t want you to know exactly how the puzzles are solved, we don’t want you to know exactly where the enemies are going to be. We want to surprise you. So, we have changed things a bit. But on the whole, the main idea, the main arcs of the story are very similar. But there are going to be some new surprises in there as well.

Is there going to be any co-op or some other form of multiplayer gameplay in Resident Evil 2, or is this purely a single player game?

You’ve claimed that you’re doing for a deeper narrative experience with RE2 2019. Is that referring more to narrative being aided by improved visuals, or have you done restructuring of story and rewriting or other things like that to improve upon the original game’s narrative?

Definitely both. For example, there will be places in the original game, that you just drove by, or maybe just walked by, or people that you talk to maybe had a handful of sentences. You’re really going to have deeper experiences with those. Sometimes you can actually go on and play for an extended period. Sometimes you have a little bit more deeper story with that person. They’re more involved than they were in the previous game. I can’t get into what those are, obviously. The narrative is definitely enhanced but I can’t get into what those are, obviously. 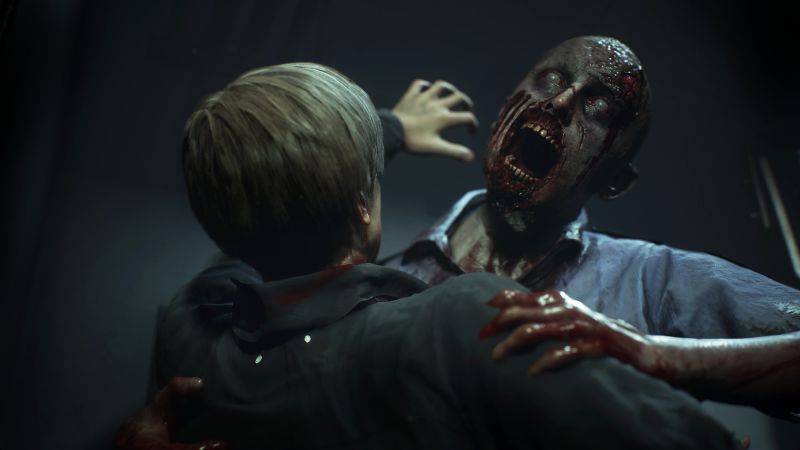 The original RE2’s music and sound design have to be some of the game’s most commended aspect, and anyone who’s played the game knows just how incredibly important they were to building the game’s tense and memorable atmosphere. With that in mind, how’ve you approached the music in RE2 2019? Is it a faithful recreation of the original pieces, or are they more of remixes?

I’d say again, from the top down, the way we made the game is that we’re being faithful to the original, but we wanted to be surprising and fresh as well. For example, the safe rooms are very calming. We want you to feel like there aren’t going to be any zombie attacks in there. You’ll hear familiar remixes like that, but it’s not going to be 1:1. We will have some original stuff in there as well. We definitely want to keep the intensity, and sort of the pulse-pounding things: like getting attacked by zombies, doing stuff when you’re kind of calm and familiar remixes like that.

Players will be able to play on Xbox One X and PS4 Pro in 4K. But if you choose to play in 4K you won’t be able to play at 60 frames per second. So it will run at 30 FPS. It is a stable frame rate.

Right now it is running at – We are targeting a high frame rate, but it’s still to be determined.

Do you have any plans to bring the game to Nintendo Switch?

No, not at this time. We just wanted to focus on PS4, Xbox One, and PC at the moment.