Voice actor Joe Cappelletti’s credit page listed Resident Evil 6 as one of the game he’s lent his voice in. He’s a very well known voice artist, having provided his talents in Final Fantasy XIII, Uncharted 3 and the Call of Duty series in various roles.

He listed three games from Capcom in his credit page, one being Steel Batallion (presumably the Kinect title), Combat Wings (which is actually owned by City Interactive, and no Capcom games in the series has yet been announced) and Resident Evil 6.

It’s pretty much a given that there will eventually be a sixth game in the long running Resident Evil series, but Capcom hasn’t announced anything officially yet. 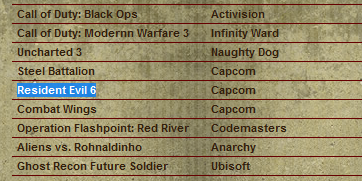 Give us your feedback in your comments below.

Keep checking back, we’ll update this page as more info comes our way.