From Sid Meier’s Pirates! to The Secret of Monkey Island, us gamers have become rather fond of hijinks on the high seas, rum swigging, plank walking and yo ho ho-ing. After all, who doesn’t like a good pirate caper. Sadly, Risen 2: Dark Waters isn’t a particularly good pirate caper. This third-person RPG is not quite the hidden treasure it promised. 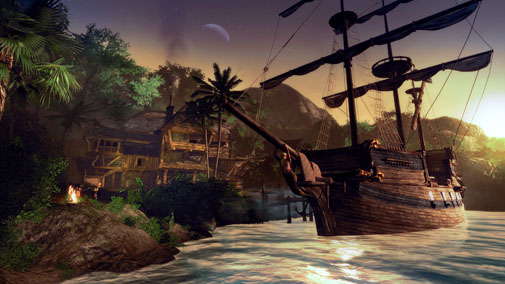 Take to the high seas in this pirate adventure

Deep Silver and Piranha Bytes take us on a journey to tropical isles, set several years after the original game. Titans are fighting it out, leaving normal folk fearing for their lives. You take the role of an unnamed hero – a member of the Inquisition – who must find a way to save the world from mythical sea creatures and weird beasties.

The graphics aren’t as good as you’d expect on current gen consoles  and despite best efforts to make the environments lush and varied, the game is plagued with pop up and tearing, dodgy collision detection and poor animation. Aesthetically, it all looks a little dated, which is a real shame. Conversely, the subtle background music and sound of waves lapping on the shore are strangely therapeutic and really add to the atmosphere.

The game largely consists of a combination of missions, fetch quests and exploration. As you’d expect from a game about piracy, pillaging and swashbuckling, you’ll come across a fair amount of cliche in your playthrough. On your travels you’ll meet some memorable characters such as feisty Patty, her father Captain Steelbeard and a varied cast of NPCs keen to bend your ear, give you quests or moan about something. Like all games of this ilk, you get to choose your dialogue response from a list of options, some of which are more effective/beneficial/useful than others. 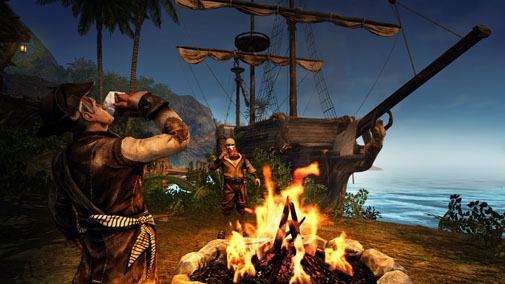 There’s plenty of drinking, fighting and swearing; it’s what pirates do!

Our hero gets to traverse various tropical islands rather than a vast single play space, with fast travel making his journey a little more bearable. There are chests to open and treasures to hunt, as well as plenty of items to collect. And there’s plenty of fighting  too, from gorillas, monkeys, giant crabs and huge spiders to panthers, warthogs and tribesmen. Level up your character and you can even partake in a little lockpicking or monkey taming. And what about learning the art of Voodoo? On paper it all sounds fantastic and exciting… In practise, not so much. For all the good ideas – like the way certain tasks can be completed in different ways depending on your skills – there are just as many flaws that dampen the fun.

To achieve anything in this game, you’ll need a lot of patience as you try to collect XP – or Glory – and gold coins. Without these, most areas and supplies will remain out of reach. Staple character movements also need to be learnt so even basic kicking isn’t possible from the start. You just have to remember that if you can make it through the early stages of the game and power up a little, Risen 2 can be an fairly decent romp. 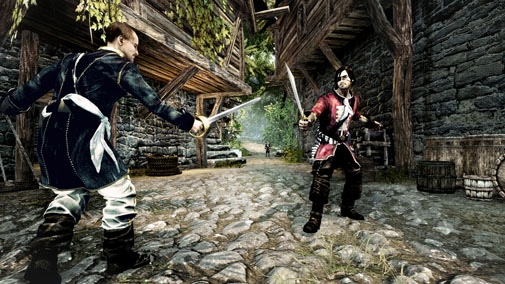 You only have basic character movements and skills at the start

My first personal bugbear – all be it a minor one – is the fact that you’re wandering these lush islands with lovely beaches but can’t even swim. What self-respecting pirate isn’t able to swim? You can’t even go for a paddle… you just respawn a few metres back from the shore.

This is not a game for young children either, largely because most of the characters spew profanity. I guess you’d expect pirates to suffer a little from tourettes but there’s really quite a lot of foul language throughout the game, which would make a younger audience blush.

The combat system is flawed too. It sucks that you can’t really defend yourself from attacks, and most confrontations just result in whacking the attack button and hoping your health outlasts theirs. Your inability to defeat some of the bigger beasts  until you learn or enhance your skills also means many paths are closed, which is a little frustrating. It’s understandable for an RPG I guess, but you really do feel massively underpowered from the outset and it takes an age to level up significantly. 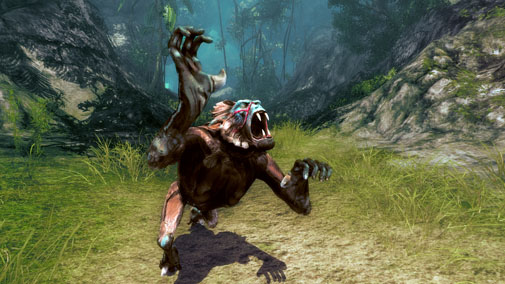 Mauled by a monkey. What a way to go

In the meantime, you should get used to seeing your lifeless body onscreen after yet another beating. And woe betide you if you haven’t saved recently. The autosaves are not particularly well placed meaning a sudden, unexpected death could lose you a lot of ground. Countless times, I found myself losing a few hours play as I’d forgotten to save the game before getting unexpectedly mauled by a monkey!

It all seems a little unfair. Even early on in the game you’ll be baffled by quite how easy it is to die – and how random it can be…  After one cutscene at the top of a tower right at the start of the adventure – featuring cliched dialogue and mediocre voice acting (like all the other cutscenes in the game) – I misjudged my footing as I ran back down the steps and plunged to the ground from a ridiculous height. You’d expect such a mistake to result in a death sequence and a restart to ensue, but our protagonist instead emerged unscathed. I was in such disbelief that I ran to the summit again and took another nosedive… same result. A short time later, and with a full health bar, I tried to take part in some sword training with a few soldiers in the courtyard; two hits from them and I was dead. Not so much training as a severe beating. A quick trip to a beach a little later to collect some flotsam and jetsam, and I strayed a little too far along the sands, only to be clawed at a couple of times by some crabs. Again, a few hits and I was a goner.

You’ll also often find yourself stuck in a horrible loop during combat, where a hit from your opponent nudges you backwards and prevents any form of retaliation. By temporarily stunning you, it means that you’re often unable to defend yourself. And what’s more, should you want to turn and flee, you can rarely even outrun your opponents. I cannot reiterate how important it is to save often!

There may be plenty of gripes but should you persevere, earn loads of XP to level up, save lots of gold and grab decent weapons and things become a little fairer… and far more enjoyable. 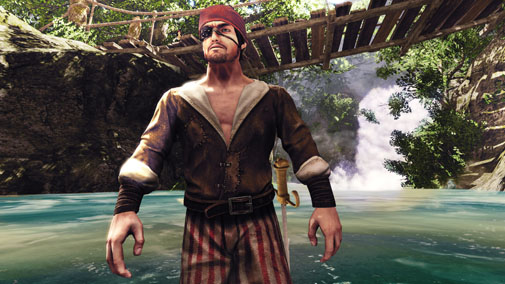 Sadly, art seems to imitate life, and buying any remotely decent items can prove very expensive. Most of the better weapons, supplies and skills are exorbitant  so until you get your mitts on vast supplies of gold, many items will be out of reach.

When you have completed countless errands or sold enough items, your hard-earned bullion can be used to acquire not only new clothes, provisions and sabres but also schematics to forge new blades.  Oyster shells, selling old junk and killing monkeys will slowly but surely improve your gold reserves – but it is a painstaking process – and one that proves a little frustrating.

Although it’s refreshing that Deep Silver and Piranha Bytes decided to move away from the traditional fantasy realm where knights and monsters meet, and instead focus on the pirate theme, it doesn’t quite live up to its promise. Look past its flaws and invest some time and it’s a decent RPG – it just could have been so much better.

It's about pirates! And you can tame monkeys! And play with Voodoo! And then there's the drinking, swearing and fighting. What's not to love?

There are more flaws that we'd like and it does hamper your enjoyment. Visuals are disappointing and storyline is weak.

Final Verdict:
FAIR
We all love pirates, right? It all sounded so good in theory but Risen 2 doesn't quite meet our lofty expectations. Dedicate enough time, however, and the game does have a certain charm.
A copy of this game was provided by Developer/Publisher/Distributor/PR Agency for review purposes. Click here to know more about our Reviews Policy.