If you’re a fan of roguelikes, chances are you’ve very familiar with Hopoo Games’ 2D sidescrolling shooter Risk of Rain. Developed by a tiny team with large ideas, the game came out in 2013 and immediately endeared itself to roguelike lovers, and common wisdom suggested that a sequel – if one was ever made – would be bigger, better, and more of the same. Risk of Rain 2 is certainly bigger and better, but it’s also quite different. As opposed to its predecessor’s 2D sidescrolling trapping, Risk of Rain 2 is a fully 3D game that puts you in large, desolate environments- but at the same time, it captures the greatest, most addictive strengths of the first game.

Risk of Rain 2 had been in early access for nearly a year and a half before its recent 1.0 launch, so it being as good as it is is not a surprise to great many people anymore. Combining a steady progression, chaotic combat, enjoyable exploration, and excellent enemy design, Risk of Rain 2 delivers a power fantasy that is immediately alluring, and doesn’t take long to sink its teeth into you. You might jump into it in the first time expecting to try it out for a couple of runs to see what all the fuss is about, but by the time you stop playing, you’ll find yourself staring wide-eyed at your screen well into the young hours of the next morning.

"Combining a steady progression, chaotic combat, enjoyable exploration, and excellent enemy design, Risk of Rain 2 delivers a power fantasy that is immediately alluring, and doesn’t take long to sink its teeth into you."

In Risk of Rain 2, you start every run as a woefully underpowered, under-equipped survivor, dropped into a desolate, alien land with no knowledge of where you are or what’s going on. You can, if you want, try to decipher what’s going on by poring over the game’s surprisingly engaging lore, which you discover more of as you play more and more- but that’s more of an ancillary bonus. What will immediately reel you in is the power progression.

Risk of Rain 2 is really all about the loot. For every enemy you kill, you get a little bit of currency, and the stronger the enemy, the more currency you get. There are very few moments of downtime where you’re not blasting away at large scores of bizarre alien creatures, which means you’re almost always rolling in dough. What you spend all of that cash on is, of course, loot, with many crates, kiosks, and boxes scattered across the map that give you various pieces of loot for different prices. As you fight and kill enemies, you gain more XP and level up, but the meat and potatoes of the progression is in the loot.

These items are without the shadow of a doubt the best part of the game. From the ordinary – like giving you a higher chance of getting enemies to bleed upon hits, or letting you regenerate some health with every kill – to the tactical – like giving you a temporary barrier every time you kill an enemy, or armour-piercing rounds that deal additional damage to bosses – to the bombastic – like making enemies explode when they die to deal AoE damage or firing chain lightning – to the passive – like increasing your movement speed or the speed at which your health regenerates – there’s a vast, mouthwatering variety of items here. 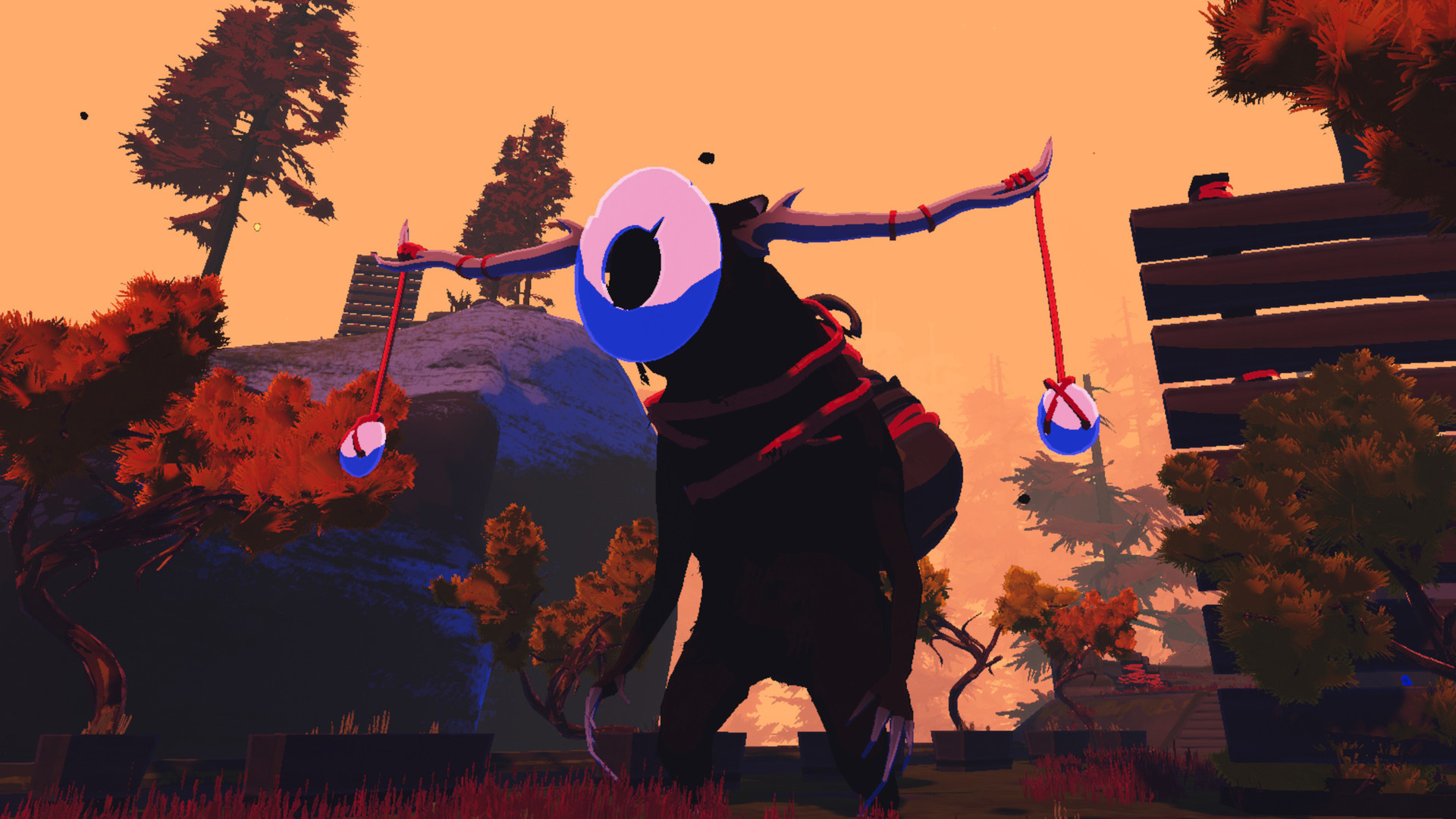 "Risk of Rain 2 is really all about the loot."

Given how many items there are, and the fact that you get them on more or less a random basis, Risk of Rain 2 staves off repetition from creeping in, and each run feels dynamic and unique. What helps is that all items are stackable. The game doesn’t get bogged down in making sure that you don’t get unfairly overpowered- it knows that the lion’s share of its enjoyment comes from letting you stack item upon item to build yourself up to epic proportions, and completely transforming yourself into an absolute behemoth with all of your loot.

Of course, that doesn’t mean that Risk of Rain 2 is a cakewalk. It smartly ensures that all of your runs are still challenges at all times with a simple yet effective system- difficulty is always gradually increasing. Every second that passes sees the difficulty going up, which means enemies scale at a flat rate, independent of whether or not you have any good loot, or whether or not you’ve stacked any of it. As such, the onus of finding loot and making a strong build is on you.

At the same time, you have to find the right balance between spending time to look for better loot and getting to the end of a stage as quickly as possible. There are certainly benefits to taking your time exploring an environment, finding secrets, killing enemies, and netting cash- you can head into the next stage equipped with great loot. But at the same time, the more time you take, the more difficult the game gets, which means you always have to ensure that you’re never taking too much time- but also that you’re not rushing through, because rushing through will most likely mean that you don’t have great loot. 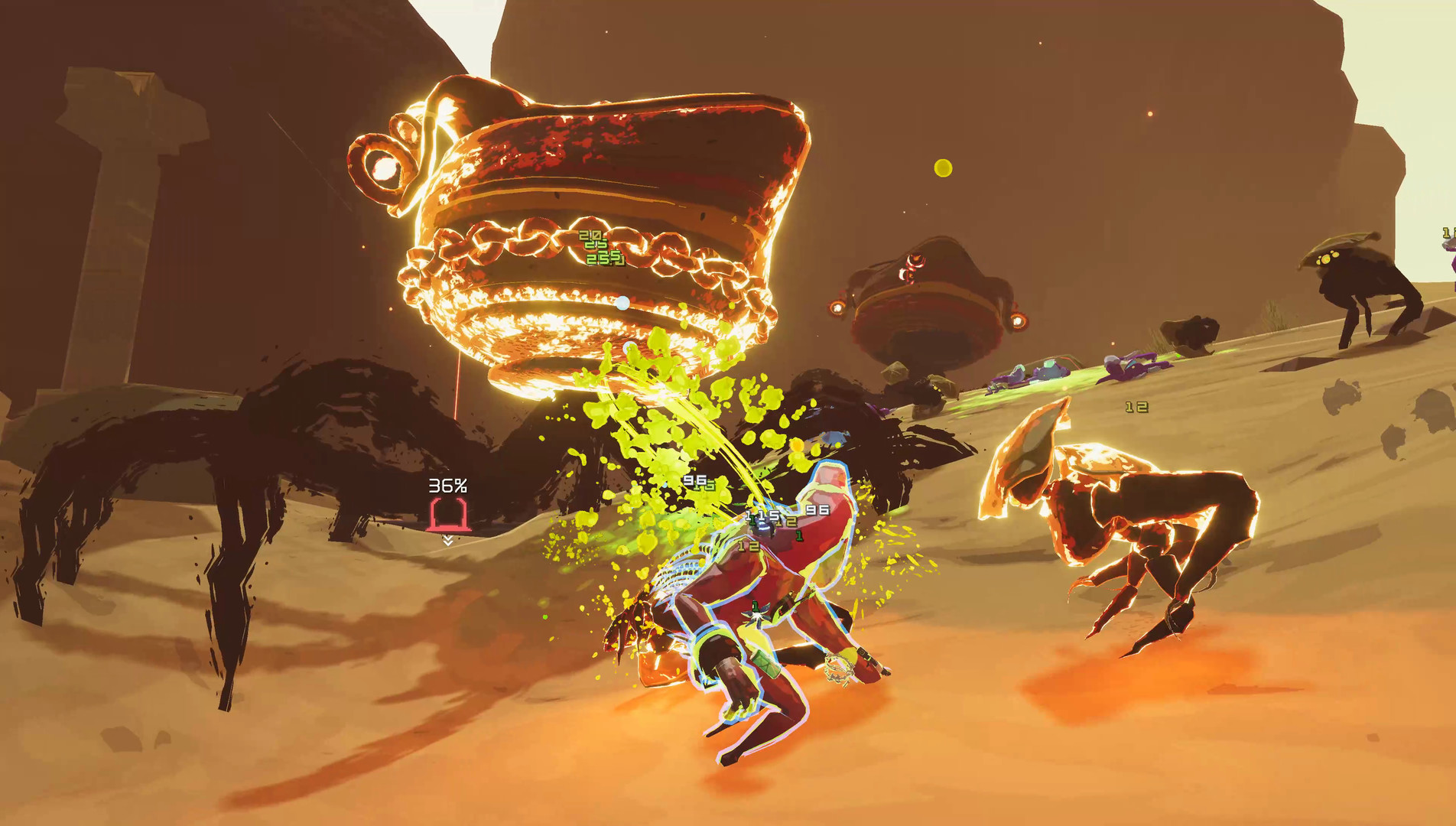 "The game doesn’t get bogged down in making sure that you don’t get unfairly overpowered- it knows that the lion’s share of its enjoyment comes from letting you stack item upon item to build yourself up to epic proportions, and completely transforming yourself into an absolute behemoth with all of your loot."

Enemy variety is another way Risk of Rain 2 challenges and surprises you. As the difficulty increases and you progress through the stages, you encounter more and more enemies, and some of the later ones are an absolute joy to fight against. Equipped with unique attacks, different and unpredictable movement patterns, and often absolute oodles of health, they serve as the perfect foil for the game’s action, and contribute to its chaotic and bombasitc nature significantly.

Things can sometimes get a little dull or repetitive, especially if you play solo. Looking for teleporters in every stage can be a bit tedious at times, while in the early goings of every run, the action can be a bit bland as compared to later on when you’re powered up, decked out with ridiculous loot and fighting against hordes of mighty enemies. While that can be an issue at times, thankfully, progression in Risk of Rain 2 is so fast and so varied that those issues never stick around for too long.

Environments in Risk of Rain 2 are also instantly compelling. The game obviously isn’t a technical marvel, but the art style it employs helps it achieve a very distinct and striking look. That style, combined with some gorgeous vistas – that you will really appreciate if you get the chance to look at them amidst the explosive action – give every location in the game a sense of mystery and desolate beauty. There’s also a decent bit of variety here, from arid deserts and fiery hellscapes to frozen wastelands and green hills. Together, the game’s low-fi music, its environments, and its art design give the game a great deal of atmosphere. 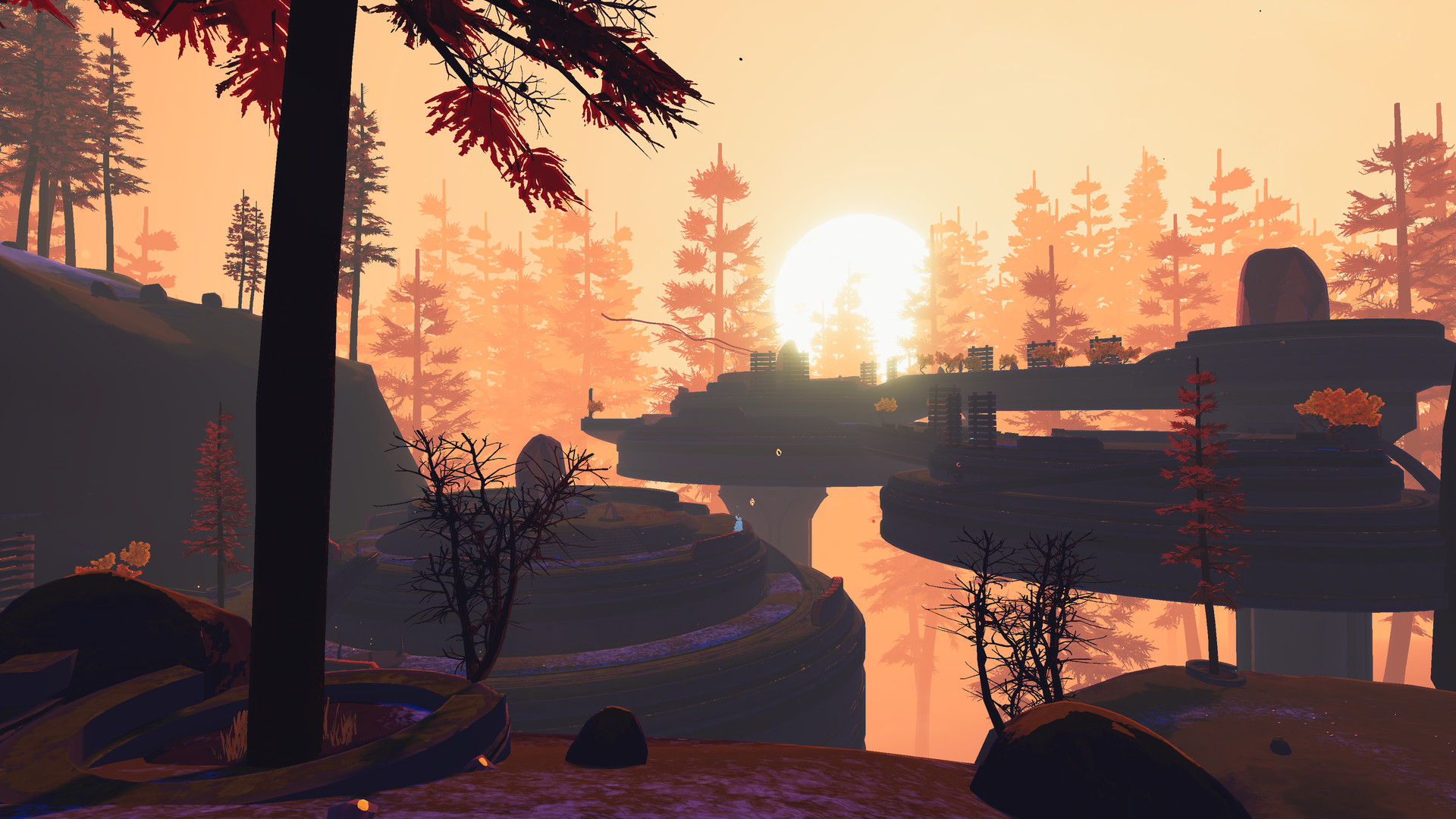 "Environments in Risk of Rain 2 are also instantly compelling. The game obviously isn’t a technical marvel, but the art style it employs helps it achieve a very distinct and striking look."

Risk of Rain 2 has a very acute understanding of what makes roguelikes fun. It’s progression is fast and rewarding, which means you always feel like you’re working toward something meaningful. Its loot is varied and impactful, which means it’s actually worth investing in and seeking out. Its enemies are formidable and and attack you in droves, which means fighting against them is always a joy, especially when you fight them in numbers. Risk of Rain 2 has that crucial “one more run” quality that the best roguelikes need to have, and offers a deeply compelling and addictive experience that proves that Hopoo Games can make a good roguelike regardless of what it looks like.

Combat is explosive and chaotic; Fast progression sees your character powering up with scores of loot in dynamic and unpredictable ways; Lots of variety in enemies, loot, and playable characters; Atmospheric environments are brought to life with great music and excellent art style.

The early stages of every run can feel a bit dull and tedious, especially when playing solo.

Final Verdict:
AMAZING
Risk of Rain 2 has that crucial "one more run" quality that the best roguelikes need to have, and offers a deeply compelling and addictive experience that proves that Hopoo Games can make a good roguelike regardless of what it looks like.
A copy of this game was provided by Developer/Publisher/Distributor/PR Agency for review purposes. Click here to know more about our Reviews Policy.