Developing a challenging game is, well, challenging. This isn’t a genre where you gradually increase the difficulty to reflect your player becoming stronger. Rather, you’re actively working against the player at all times and challenging them to think quick on their feet, use their environment, rely on whatever items/abilities they have and then enthusiastically meet the next challenge as soon as they’re done. When it comes to turn-based strategy/action platformer hybrids like Tomasz Wacławek’s RONIN, the challenge is in offering a bullet point list of new obstacles, fresh objectives and a fluid control system. Suffice to say, it only half-heartedly ticks most of those boxes. 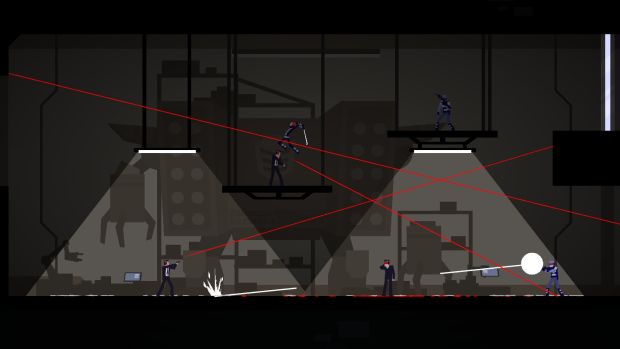 "It's important to note the combat of RONIN. While moving around and platforming, the game is in real-time. Jumping is performed using the left mouse button and you can trace out arcs to follow while leaping around."

The story has you playing as a young girl seeking revenge against her father’s former associates for his death. Your motivations aren’t really outlined – it takes the premise of Kill Bill and strips away anything remotely resembling a plot, characterization, dialogue, etc. to advance the story. The girl is equipped with a katana, grappling hook and a peculiar set of skills for taking down multiple foes. How does she fare against these venerable bad-asses, each with their own personal retinue of guards and cyber samurai warriors?

As it turns out, pretty well. There are only a few enemy types, each with their own unique trait. Cyborg samurai must be stunned in mid-air or while swinging through a window, lest they slice you in half. They also travel in a straight line with their slices, making it easy to trick them into creating openings. Assault rifle guards fire continuously in a straight line, further pushing you to carefully consider your moves during turns. Every enemy can be stunned, setting them up for the killing blow. Conversely, if you haven’t been discovered by an enemy or you’re close enough, you can slice them up in a single strike.

It’s important to note the combat of RONIN. While moving around and platforming, the game is in real-time. Jumping is performed using the left mouse button and you can trace out arcs to follow while leaping around. Additional functions like hanging from walls and ceilings, along with using the grappling hook for smashing through glass and mid-air corrections, also serve a purpose. When entering combat, your movement becomes turn-based, as indicated by a small bar on the bottom left of the screen. The player must stun their enemies – or get close enough to them – to attack. 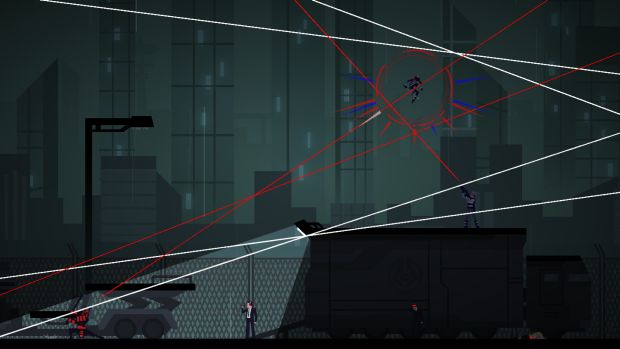 "Here's where the true beauty - and the many flaws - of RONIN come to light. When everything flows together and the controls respond accurately enough, you'll be zipping from one enemy to the next, slicing and dicing."

During combat, your enemies’ attacks will be denoted by a straight red line. One shot or slice when you’re in the line means certain death. The initiative may be on your side at certain points but for the most part, there will be plenty of close calls as you work to stun and execute each enemy. That bar fills up with action points as you stun enemies and can be used for different abilities like throwing your sword or teleporting across the room to a foe. Fill up the whole bar and you automatically receive a second turn.

Here’s where the true beauty – and the many flaws – of RONIN come to light. When everything flows together and the controls respond accurately enough, you’ll be zipping from one enemy to the next, slicing and dicing. At one point, I threw my sword at an enemy only to have it fall on to another foe, killing him instantly as I went to retrieve it. Those moments of preventing the alarms from sounding and quickly destroying a room full of enemies, each with their elevation and red dot sight wearing down on your psyche, can be adrenaline pumping at times.

However, they can also be an exercise in frustration. The “one hit death” mechanic isn’t even the biggest problem. Oftentimes, you’ll learn by trial and error how to properly clear out a room full of enemies. The cyber samurai took several tries before I could even grasp the mechanics of how to kill them (and the solution was purely by accident). There are also points where the action can revert back to real time as guards try to call in a lockdown, which can be jarring when you’re accustomed to time stopping in combat. This usually happens when guards lose sight of you and are alerted. But in some instances, I was unable to move or jump despite being out of sight, which led to hitting the big “Play” button to go back to real time.

"RONIN is a mix of interesting ideas set against a challenging game. Some of those ideas, like the controls and interface, required more work. However even if you can tolerate the frustrating challenge, there isn't much to the core experience. "

RONIN’s interface can be very unwieldy at times as well. Several nuanced actions like grappling through windows can be awkward but pulling yourself up is even more of a chore. Grappling through a window and attacking a cyber samurai at just the right moment before he cuts you in half is a monumental task. This requires you to grapple, orient yourself properly, crash through the window and then hit the attack icon at just the right moment. Why the developer decided to go with such an interface is odd, to say the least. There’s the problem of the action points and ability usage, as you consume points by jumping and some actions like throwing your sword need to be done in mid-air. Some of the abilities are also clearly better to strive for than the others (ignore unarmed attack and focus on getting teleport first).

Couple this with the relatively short campaign, repetitive mission design – kill enemies and hack data terminals again and again until you eventually learn the location of your target – and the mandatory yet similar bonus objectives per mission – which must be completed in order to earn skill points – and RONIN becomes a mix of frustration, adrenaline, boredom and confusion. There’s a generous amount of checkpoints but you have to wait through a loading screen each time you die. Did we mention no checkpoints for the final mission? At least that one has some variety to it, difficulty be damned. The visual style and animation is pretty cool and striking though Gunpoint fans won’t find much new here. The soundtrack had some catchy tunes but those seem to cycle endlessly until you eventually ignore them.

RONIN is a mix of interesting ideas set against a challenging game. Some of those ideas, like the controls and interface, required more work. However even if you can tolerate the frustrating challenge, there isn’t much to the core experience. The combat that can sometimes be awesome but Kill Bill styling can only garner so much participation in the long run for RONIN.

Final Verdict:
FAIR
RONIN wants to be a thinking man's twitch slasher. It mixes intriguing visuals and a barebones but singular premise with an awkward interface and little variety. The first few missions are a template for the remaining game and there's little incentive to see it through to the end, much less replay it.
A copy of this game was provided by Developer/Publisher/Distributor/PR Agency for review purposes. Click here to know more about our Reviews Policy.