Whereas Final Fantasy XIII is remarkable for having been the first entry in the long running franchise to have been multiplatform (truth be told, that is perhaps the only thing it’s remarkable for), having released earlier this year for both the PS3 and the Xbox 360, in Japan, the game remains a PS3 exclusive. We don’t have any idea why Square passed on releasing this title for the 360 in Japan- possibly it has to do with low sales for the system, which only last year cracked a million in the land of the rising sun- but as it stands now, the Japanese build of this game is only available on the PS3.

Well, certain developments indicate that might be about to change soon. Japanese gaming blog Andriasang.com reports that the Xbox 360’s Japanese site lists achievments for Final Fantasy XIII, which is clear indication that Square Enix may be looking to release the game there. 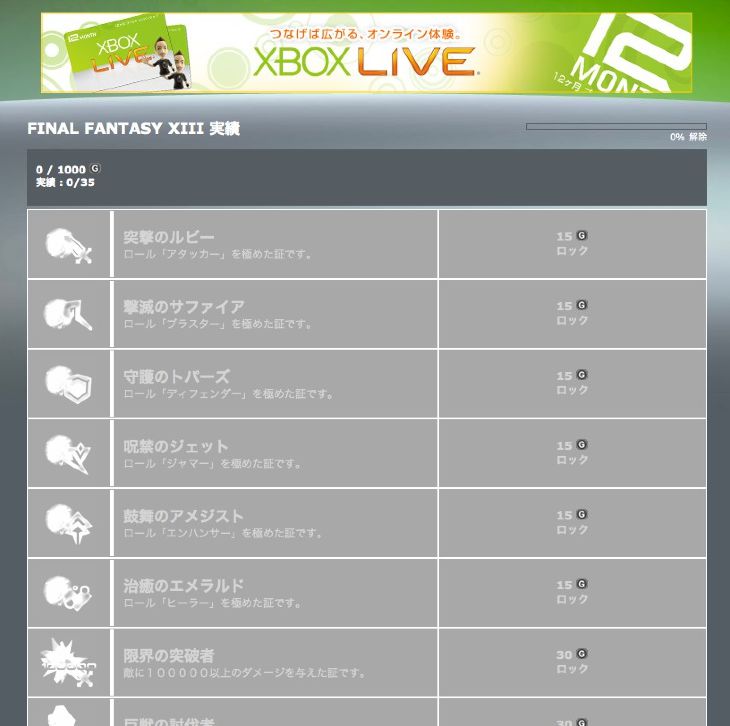 Of course, this begs the question as to exactly why Square Enix are suddenly releasing the 360 edition of Final Fantasy XIII in Japan. Possibly, it has to do with the game’s flagging sales- though the title managed to hit the 5 million units sold milestone in record time, its sales have tapered away since. This may be a move to boost sales for the game.

Conversely, Microsoft Japan may have struck a deal with Square to have the game released in Japan as well, possibly with some extra content, to revitalize sales of the console there.

Finally, it is equally possible that the Xbox 360, which has been doing increasingly well in Japan since the release of Bayonetta earlier this year (managing even to give the PS3 a run for its money when Monster Hunter Frontier Online was released for it earlier this month) may have caused Square to want to cash in on the money train.

It is likely the title will be hitting the Xbox 360 in Japan as well. We’ll keep you guys posted.