Ryse: Son of Rome is a cinematic experience in every sense of the word. This may be taken to mean that the game features an epic, blockbuster-esque campaign with massive set pieces. And for the most part, it does, harkening back to the days of Gladiator. However, it’s cinematic in the amount of post-processing and detail that has been embedded into the game to give the look, feel and movement of a celluloid epic. Even if the mood is decidedly still that of a video game – that too, a rather drab and repetitive game – Ryse does prove you can create a fairly good looking experience without having to worry about 1080p resolution or 60 FPS. 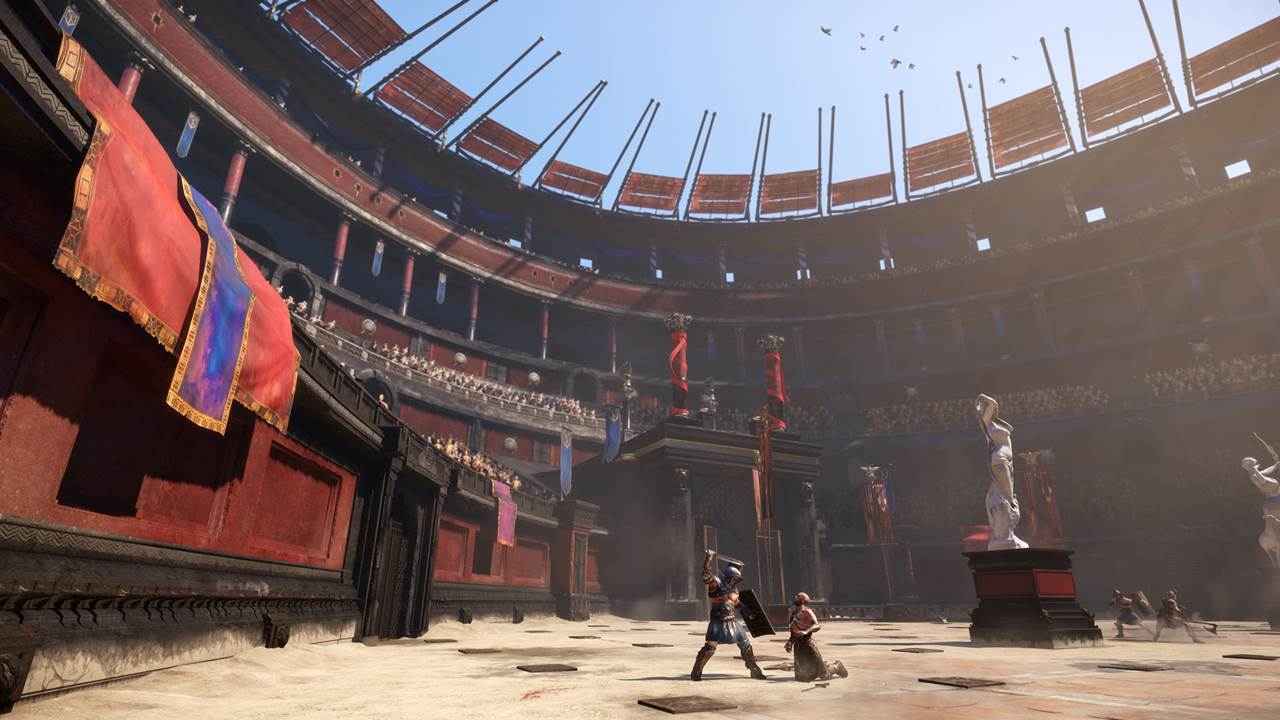 "Performance-wise, Ryse does great. The game isn’t even locked at 30 frames per second, but the frame rate barely dips or rises more than a few frames"

Starting with the environments, you won’t find a lot to complain about. Crytek has spent a lot of time intricately detailing Rome, from storming great bridges to fighting across wide open landscapes and laying siege to forts. Catapults rain down fire from the skies, while legions of Roman troops defend against a barrage of arrows in a scene straight out of 300. The physically-based lighting model and shading mean that you’ll see more realistic depictions of shadows in real-time with the overall look of the game standing out from the pack.

One of the biggest complaints about the Xbox One has been eSRAM it employs. It’s a given by now that this limits the resolution of most games to 720p or 900p in Ryse’s case (at least until a solution inevitably arrives, like on the Xbox 360 for its eDRAM). In order to maintain the sharpness of the visuals and characters, Crytek has employed the use of SMAA 1TX, which combines morphological anti-aliasing and smarter temporal anti-aliasing that smoothens out any jaggies apparent. The use of “bokeh” depth of field, directly related to the aperture of the apparent camera present. This leads to a blurring with smaller aperture, with the SMAA avoiding any issues that may arise from typical temporal AA such as signal changes, “ghosting” of transparency and shadows, etc.

"In order to maintain the sharpness of the visuals and characters, Crytek has employed the use of SMAA 1TX, which combines morphological anti-aliasing and smarter temporal anti-aliasing that smoothens out any jaggies apparent."

Combined with dynamic soft shadows, motion blur in the surroundings (such as when projectiles rain down) and the use of screen space directional occlusion for a more uniform occlusion in a global lighting environment (which results in a lesser amount of dynamic light sources), Crytek achieves a look that is scaled back but nonetheless visually rich style without having to worry about jagged edges.

To further aid the cinematic effects, Crytek has also implemented film grain into the proceedings. It may be subtle but in conjunction with the bokeh depth of field, helps give Ryse that much classier an appeal to go with its shading.

Of course, problems do arise. Contrary to expectations, the entire game isn’t rendered in real time (cut-scenes are pre-rendered and played back rather than rendered on the fly) and for all of its implementation of advanced cloth and dangling objects, Ryse suffers from some serious animation snafus. One minute you could be executing some fool and moving on to your next target, while the next, you could suddenly be transported in front of the latter. It’s a jarring effect, one that is replicated across the battlefield almost as much as the character models.

When a game like Dead Rising 3 can boast of no two zombies looking alike, it’s a real shame to see Ryse’s enemies look like carbon copies of each other. Yes, there may be up to 85,000 triangles per model, but the suspension of disbelief is somewhat interrupted when you encounter the same dude you just killed two minutes ago. Thankfully the facial animations and expressions are incredibly realistic, and animation holds up perfectly during cut-scenes. 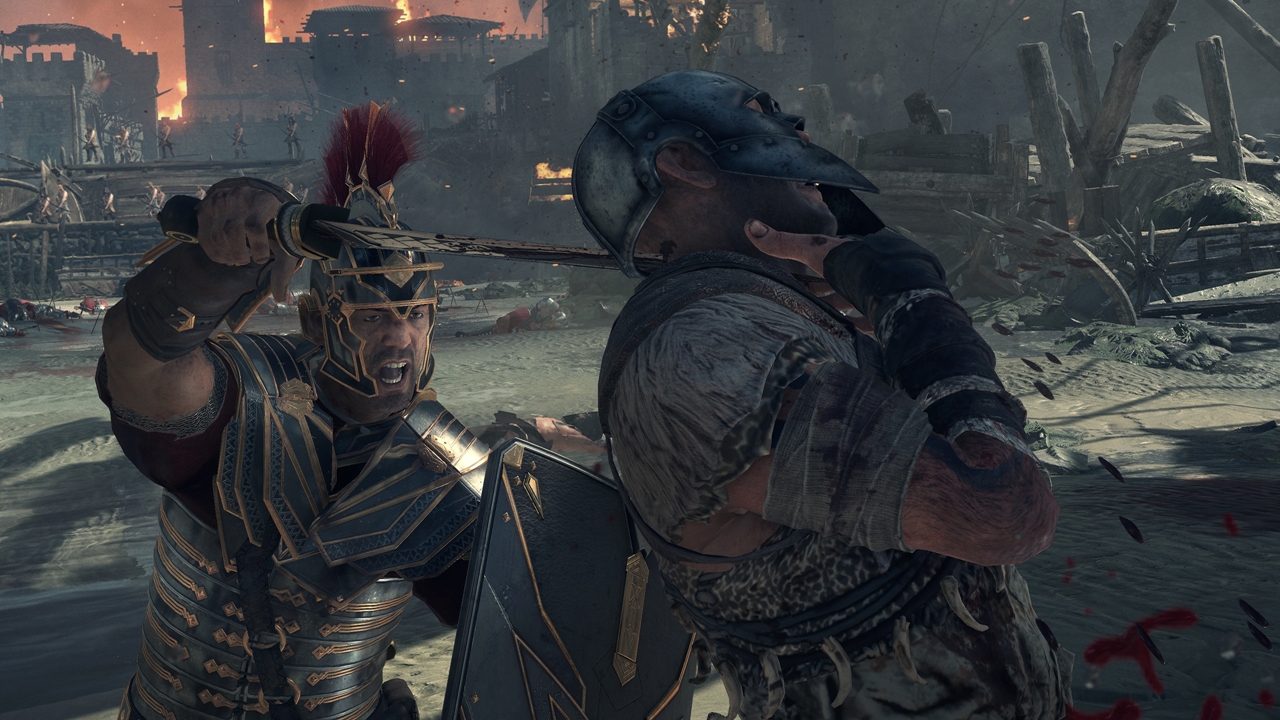 "Ryse has a certain visual splendour to it. A lot of this comes from Crytek’s own custom solutions to common problems."

Performance-wise, Ryse does great. The game isn’t even locked at 30 frames per second, but the frame rate barely dips or rises more than a few frames. When you consider the amount of chaos happening on screen at any given time – from slow motion kills to dozens of soldiers falling into line behind you and mobs of enemies rushing towards you – it’s a pretty stellar achievement.

One thing that probably suffered in the exchange was the interaction to one’s environment. Rocks and stone structures explode and shatter into pieces during gameplay, but you’ll never be interacting with these pieces or having them roll around when you engage an enemy near them. Flaming arrows that become embedded in the ground quickly dissipate, though corpses do take a tad longer. Again, nothing that will significantly take you out of the experience and you’ll be preoccupied enough with the battles to not notice.

Ryse: Son of Rome is without a doubt one of the most visually splendid games of the new generation, even with a few glitches here and there. It’s especially impressive given the vision Crytek tried to achieve, even if understanding of the hardware isn’t as efficient at this point. Ryse may be one of the shabbier launch titles in terms of gameplay, but we can’t wait to see what Crytek achieves in the coming years for the Xbox One.