New cosmetics like scars and tattoos, the drum and Speaking Trumpet and more available. 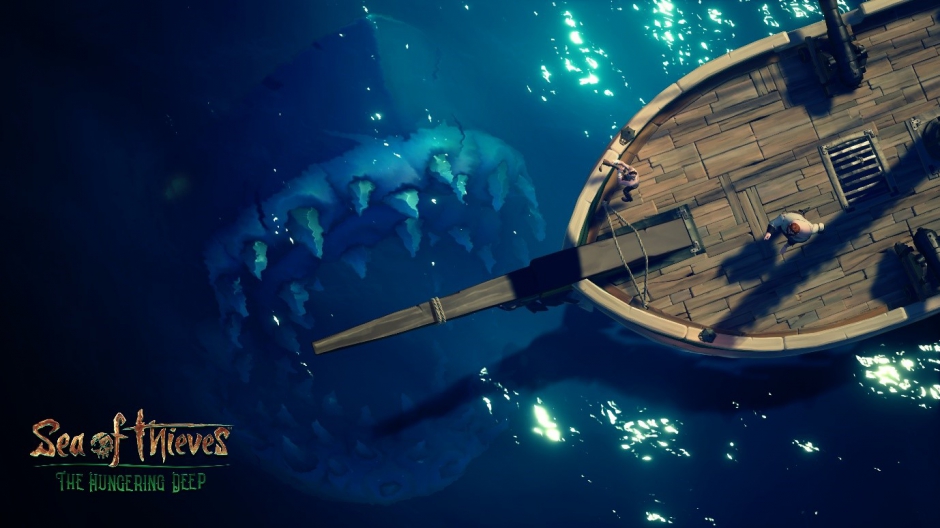 Despite its barren content at launch, Rare is still chugging along on Sea of Thieves and its latest update The Hungering Deep offers fairly substantial content. Above all, it brings new time-limited story content with “Merry” Merrick as a new AI threat emerges.

Along with this quest, which sees players following riddles and rumours, the update introduces the Bilge Rat. To know about time-limited events and quests, visit him. There’s also the new Speaking Trumpet to let others know if you’re friendly or not. It can be obtained through the Hungering Deep campaign but will have variants that can be purchased in the future.

Other new content includes a drum, ship flags, new cosmetics like tattoos and Scars and much more. Scars are interesting since they’re earned through campaigns and events. No purchases here – Scars will represent one’s adventuring status throughout Sea of Thieves. New content aside, the update also brings fixes for server stability and pop-in. Check out the full notes below.

This week’s update introduces The Hungering Deep, the first step in our post-release content plan. A new and not inconsiderable threat to seafarers is joined by a raft of other additions, including a voyage of discovery upon which you’ll cross paths with Merrick himself.

Fulfil your dreams of becoming a pirate percussionist with the new drum, use flags to signal your intent to attack or ally with other crews, and represent with scars, tattoos and a bunch of new cosmetics! Want to know more? Check out the dedicated page for The Hungering Deep.

This content release introduces and showcases a raft of new features, all of which will be persist in Sea of Thieves beyond Merrick’s story and its time limited campaign.