Sea of Thieves Will Get Enhanced Quest System for PvE

Plus, the developers also discuss the unique perspective that the upcoming PvP mode adds to the game. 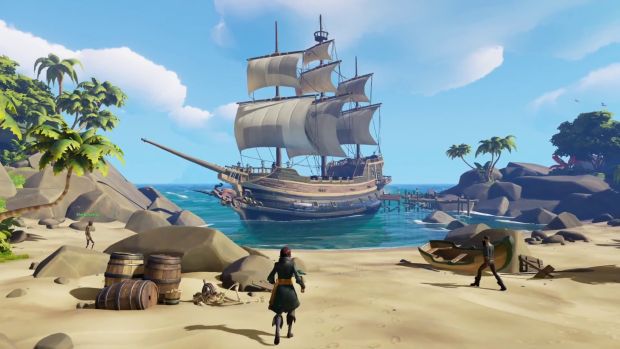 Sea of Thieves has come a long way since launch. While at release, it was a divisive game, disappointing many due to its lack of fleshed out mechanics and meaningful content, Rare has since supported it persistently with free content updates and expansions, and the game is in a far better state now than it was a year ago.

And that’s not about to stop any time soon, either.  In an interview with Gamereactor during the Fun and Serious Festival in Bilbao, Executive Producer Joe Neate talked about the new mechanics the developers are bringing over to the game for both PvE and PvP—including a brand new quest system for the latter.

“For some people that want guided goals, they want lore, they want story, we know that we’re underserving players, but we’ve proven that we can do it and that it works in the shared world with campaigns we’ve done around the Hungering Deep or Cursed Sails where you put lore, put story in,” Neate said.

“We’ve had a team working on basically a new and improved quest system around story and lore in this shared world for quite a while now actually, and it was originally planned to be our fourth update, but we actually moved it back to next year because we wanted to add and grow.” Neate further added that the new quest system will “appeal to those people that want that crafted lore, want that adventure, want that story, and also appealing to maybe single players as well.”

He also talked about Arena, the upcoming PvP mode, which he pointed out distills the various systems of Sea of Thieves into one mode, while also adding a competitive slant to proceedings, and thereby giving players something else to strive towards.

“We’re playtesting Arena. We want to get it into our Pioneers community program early in the new year, so we are just trying to nail down that almost MVP of an experience. It’s kind of all the best bits of Sea of Thieves condensed down, it’s treasure hunting, it’s battling at high intensity, high speed. Even though it uses a lot of the same mechanics, it feels very different.” He noted that the team is hoping to get a rough build of the mode out “early”, so hopefully we won’t have to wait long for it.

Given that Rare has proclaimed that all the content we’ve already seen for Sea of Thieves is just the start, I can’t wait to see where they take the game going forward. Sea of Thieves is out now, exclusively on Xbox One and Windows 10 PC.