Posted By Rashid Sayed | On 13th, Oct. 2010 Under News | Follow This Author @GamingBoltTweet 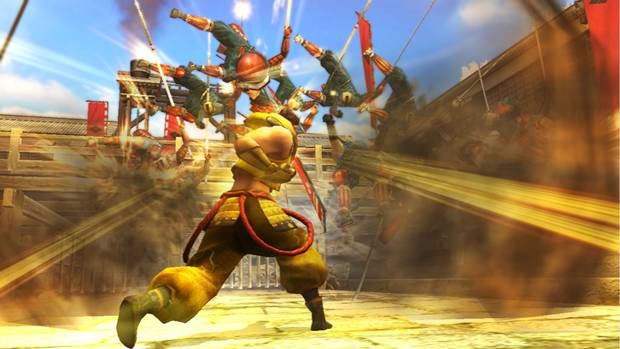 Capcom today announced that Sengoku BASARA: Samurai Heroes will be shipping to retailers in North America. The latest project by Devil May Cry 4, Resident Evil, and Resident Evil 4 producer Hiroyuki Kobayashi, Sengoku BASARA: Samurai Heroes follows players as they marshal through feudal Japan ending at the dramatic battle of Sekigahara. Launching on the PlayStation 3 computer entertainment system and the Wii system from Nintendo, with Sengoku BASARA: Samurai Heroes, players take control of sixteen unique and vibrant samurai heroes in huge battles against hundreds of opponents that grow ever more challenging. On their journey to the final battle, players will learn how to unleash spectacular BASARA Arts and utilize Hero Time to wipe out as many enemies as possible.

Each of Sengoku BASARA: Samurai Heroes playable characters are based on real-life legendary samurai warriors with their own unique weapons and fighting styles. Throughout each battle, players work to capture camps scattered throughout the battlefield to gain additional resources and weaken the final boss. Victory in battle not only delivers new territories but the natural resources of that region, which can be used to create various accessories that make heroes and their weapons more powerful. In addition to the weapons wielded by each hero, players collect BASARA throughout their fight which can be used to perform over the top moves that will devastate hundreds of opponents at a time.

In a story that reveals itself through humorous dialogue between the characters on the battlefield, the course of history will change based on player tactical decisions, the route plotted through Japan, and the alliances formed along the way. Resulting in over 60 different possible endings to the game, players can re-write history and alter the outcome in the events leading up to the final battle. Never having to fight alone, each samurai is accompanied by an A.I. general or can play split-screen co-op with another player to lead their armies to victory.