Shadow Warrior 3 Review – The Good, The Bad, and The Wang

Lo Wang is back again, once again, in a more linear single-player adventure but is this no-frills approach worth checking out for FPS fans?

Shadow Warrior 3 is a smorgasbord of shooting and slashing, topped with wall-running, grappling, executions and other relevant action game tropes. It retains the grindhouse-level gore of its predecessor while presenting a more focused, linear narrative (sometimes to a fault) with above average levels of crassness. This may not be the most epic single-player shooter campaign of 2022 but it’s a fun time, for as long as you can savor it.

The story takes place shortly after the events of Shadow Warrior 2, which saw Kamiko transform into a massive dragon to seal the gateway between the Human World and the Shadow World. So you’d be forgiven for not seeing a single mention of Kamiko at all (or how Lo Wang survived being eaten. Instead, the dragon has been wreaking havoc on the world and Lo Wang is focused on killing it, teaming with his old nemesis Orochi Zilla and the cranky witch Motoko. Somehow, Hoji’s mask holds the answer but can this team of angry misfits hold it together long enough to co-exist? 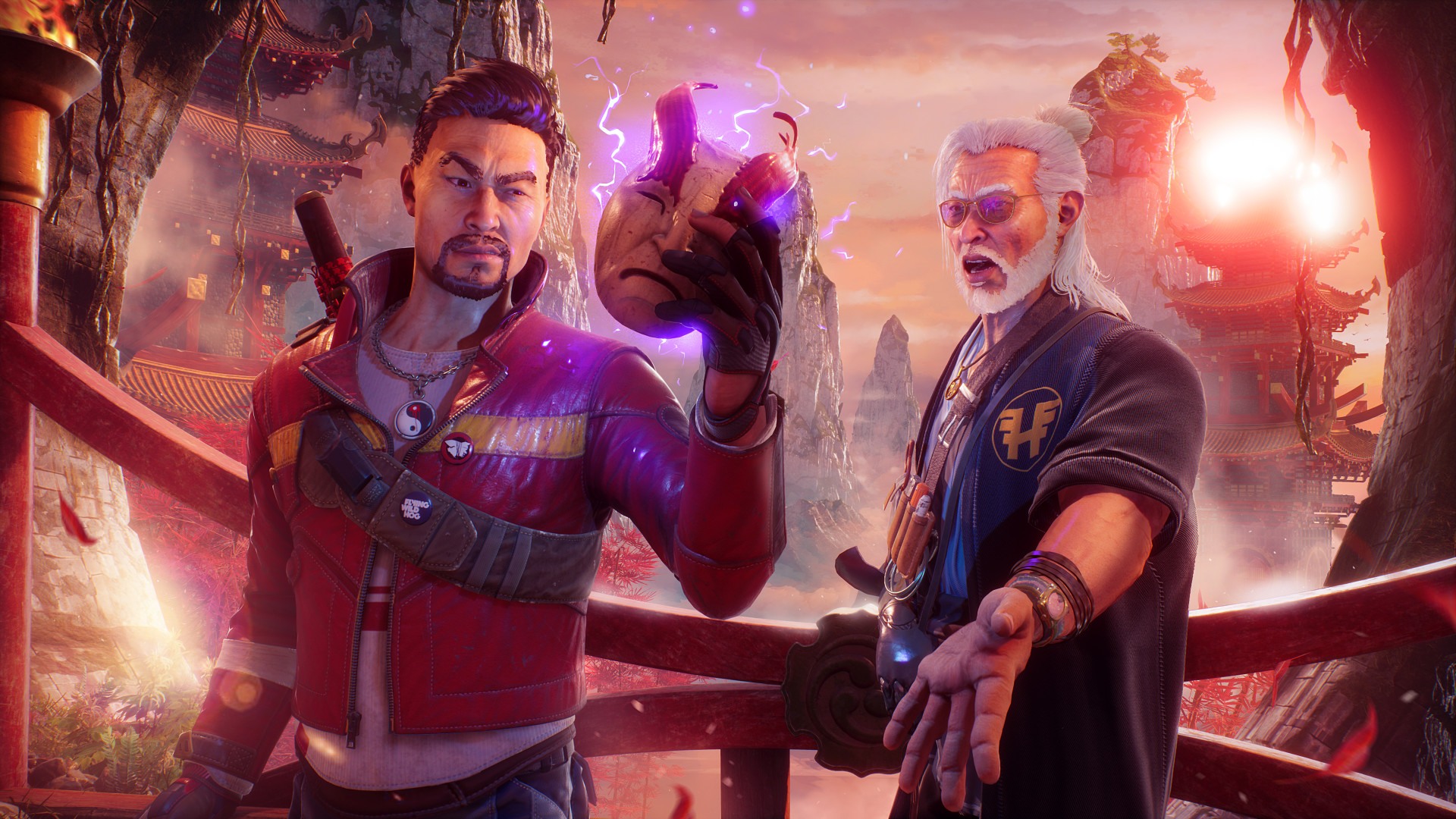 "Wang’s immature yet faithful attitude is captured well in a good amount of dialogue. But sometimes the writing goes to the well a little too often for innuendo and crass humor."

Shadow Warrior 3’s campaign mostly succeeds with its pacing, quickly moving along without much delay. Despite misgivings about Kamiko seemingly being retconned, the set-up starts off interestingly, even if it does quickly veer away from the interesting friends-turned-enemies dynamic of Wang and Zilla. Motoko is also barely featured and seemingly exists just for one plot contrivance (and for Wang to poke fun at).

Wang’s immature yet faithful attitude is captured well in a good amount of dialogue. But sometimes the writing goes to the well a little too often for innuendo and crass humor. It comes across as unfunny at best and lame at worst. Character development also feels off, like the cast suddenly banding together rather than seeing any real growth (with perhaps one exception) because it’s time to wind down the story.

I know better than to expect consistently amazing writing in a Shadow Warrior campaign. You’re in it for the fast-paced action and gratuitous violence (which is gloriously gratuitous here). But given how squarely focused on the narrative the game is, these can become annoyances more often than not.

Despite the uneven quality of the dialogue, the cast does a great job voicing each character. Mike Moh is perfect as Lo Wang, effortlessly swinging between despair at losing his “mojo” to joy when slaughtering dozens of yokai. He even suddenly talks about the importance of mental health, sounding honest without making it into some kind of punchline. Nevertheless, you should get used to Wang’s battle dialogue – it repeats fairly often, though hearing “I can’t even tell whose blood this is!” somehow never got tiring. Make of that what you will. 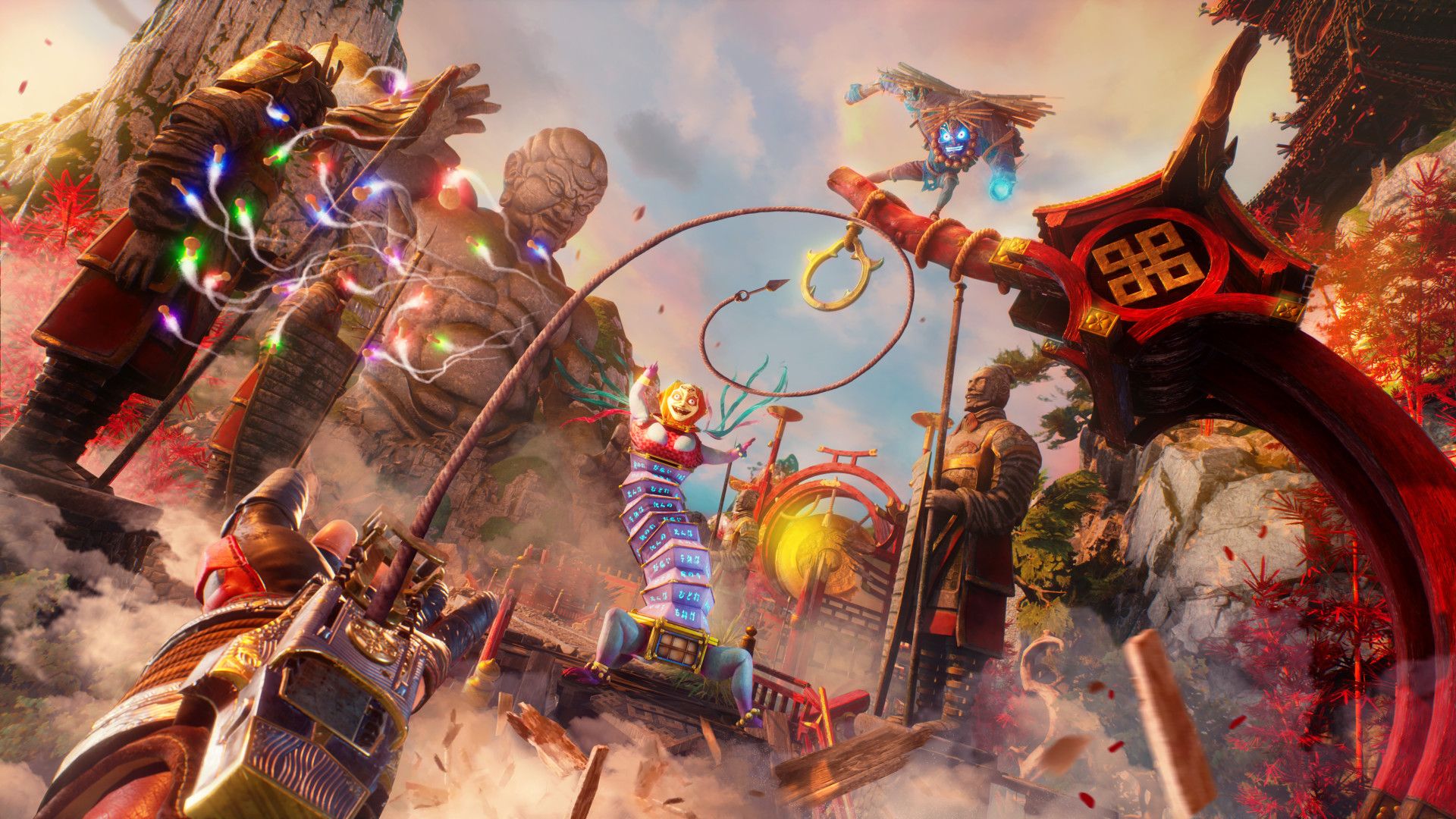 "All of the guns are incredibly satisfying, from the Riot Gun’s devastation to the Revolver’s headshots and the Basilisk’s kick, and really reinforce Wang as a veritable force of nature."

For as long as they’re present, Andromeda Dunker and SungWon Cho (aka ProZD) do well as Motoko and Zilla respectively. The latter comes across convincingly as a gruff old-timer fallen from grace who wants to better himself but isn’t above pursuing any method to defeat the dragon. His attempt to “cheer” on Lo Wang during the climax is also genuinely funny.

It’s the combat and level design that will ultimately draw you into Shadow Warrior 3’s shenanigans. Forget about randomized loot of different rarities, character stats, and a huge arsenal. The weapon selection boils down to a few guns and Wang’s katana, each with three upgrades. Wang also has a few upgrades like passive health regen, more explosive barrel damage and so on. All of the guns are incredibly satisfying, from the Riot Gun’s devastation to the Revolver’s headshots and the Basilisk’s kick, and really reinforce Wang as a veritable force of nature.

Of course, there are other things to replace the previous game’s looter shooter elements. Environments are laden with traps, usually of the massive buzzsaw variety, which can be activated by shooting switches. Of course, you could also just push enemies into wall spikes and off the map with the Chi Blast. Wang also has increased mobility via wall-running in addition to double-jumping and dashing; the grappling hook which can be used to latch on to some enemies and drag explosive barrels across an arena; and the new Gore Weapons obtained on execution. 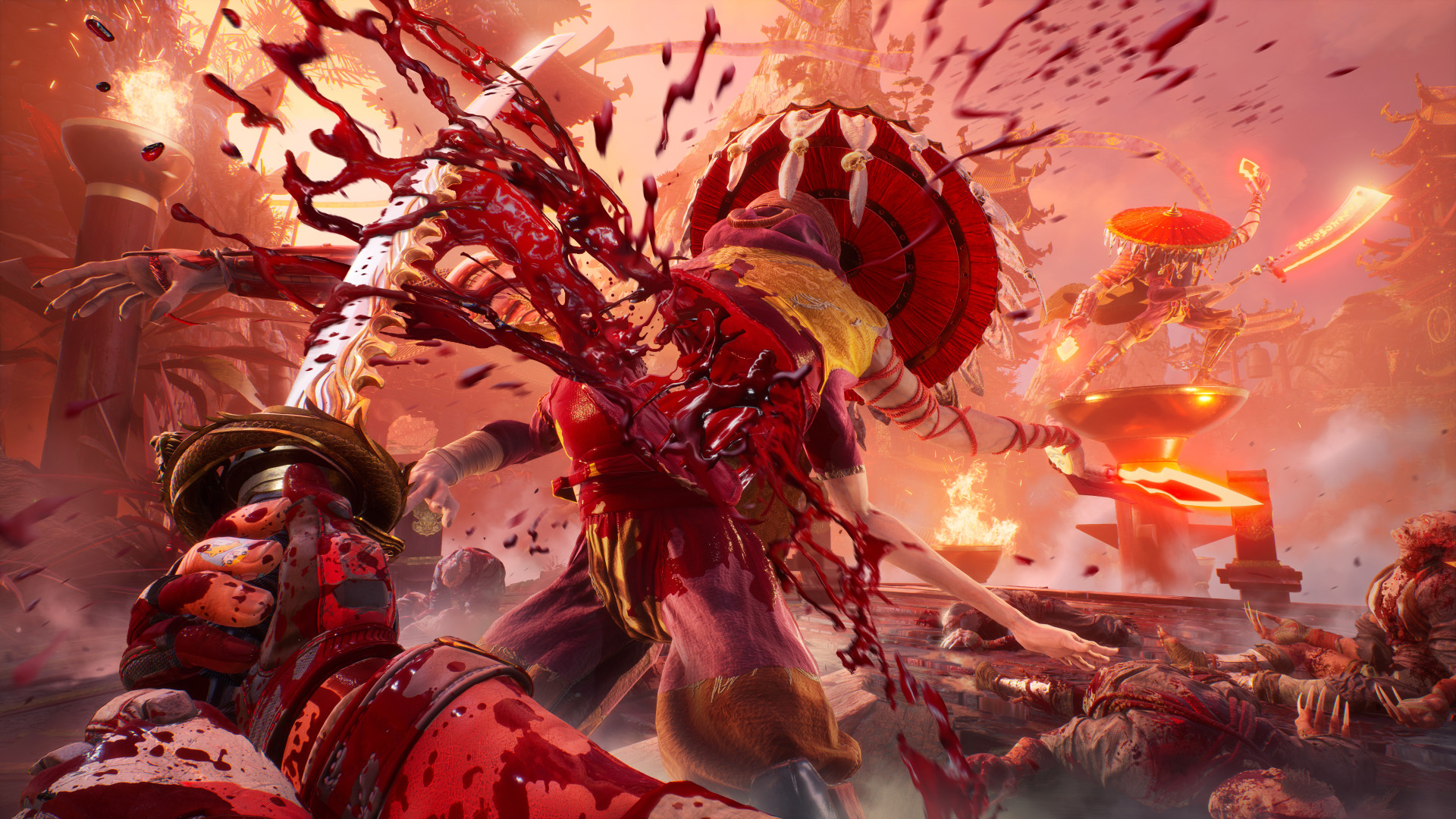 "The game does a good job mixing up its combat arenas and traversal sections while the environments sport a surprising amount of gorgeous details."

Basically, when you execute an enemy, you take a weaponized piece out of them. This ranges from ice bombs and giant mallets to a floating eye that automatically attacks foes and a grenade that turns into mini-disco ball of lasers. Depending on how strong an enemy – and their Gore Weapon – is, you may need more than one bar of Execution meter. Thus it becomes a case of using a single bar on smaller enemies to obtain health buffs and freeze crowds or saving two bars for the big guns.

Aside from the Gore Weapons they confer, the enemy variety also warrants a mention. Shogai are your regular mooks that keep the execution meter, health and ammo coming, but there are also crazy foes like Hattori, which has four arms and wields three blades. Firing blindly results in it deflecting many of your bullets but it’s susceptible to stuns with the Chi Blast, especially when it begins spinning.

The Mogura Twins, with their tendency to burrow underground and pop out to throw projectiles, also require some timing to take down (or a good freeze to stop their movement entirely). There’s no strict requirement for using certain weapons on certain enemies but you’ll be alternating plenty between shooting and slicing, since ranged kills confer health while melee hits and kills provide ammo.

Compared to the randomly generated sections of Shadow Warrior 2, level design is much more guided and cohesive. Or at least, as cohesive as a world can be with a massive dragon warping its gravity and weather on a whim. You’ll venture through old structures on cliff sides, subterranean caves with a hefty amount of vegetation, and even a collapsing dam. The game does a good job mixing up its combat arenas and traversal sections while the environments sport a surprising amount of gorgeous details. However, levels as a whole are incredibly linear with little to nothing by way of secrets or extras. Outside of the challenges menu, Weapon and Character Upgrade Points are almost always in your main path. Even if you were curious to see what lies on the beaten path, there’s ultimately nothing of note.

"Shadow Warrior 3 is more than just a step up from its predecessor – it’s ultimately a different direction that still maintains the series’ penchant for humor and bloodshed."

At least the controls feel exceedingly good in almost all circumstances – switching between melee and ranged combat, grappling, wall-running and movement are all fluid. Executions are also generally smooth but there will be an instance or two where the response feels off. Also, for as good as the katana can be – especially when upgraded to shoot fireballs, summon thunder and more – its swings can sometimes feel like they lack a bit of heft and impact. Your mileage may vary though.

With a runtime of less than five hours on Medium difficulty, Shadow Warrior 3 almost insists on not overstaying its welcome. Even with its contrivances, the campaign is definitely a complete experience – it’s just that you’ll be hungering for even more once it’s over. You could attempt Hard Mode, which makes enemies hit harder, along with completing the check-list of challenges for upgrade points.

There are no Challenge Levels or modes like an Endless Arena though. You don’t even have options like New Game Plus or a Chapter Select for revisiting completed levels. One could argue that it doesn’t need these things but with how fun the gameplay is, having something else besides the campaign to cut loose in would have been nice.

Shadow Warrior 3 is more than just a step up from its predecessor – it’s ultimately a different direction that still maintains the series’ penchant for humor and bloodshed. If an action-packed, no-frills first person shooter that doesn’t take itself too seriously sounds like a good time, then this may be worth a look. If nothing else, it’s a fun pit-stop in a year packed with massive experiences.

Fairly short runtime that becomes all the more egregious due to the lack of any additional modes or features. Some of the dialogue, especially the more crass lines, often miss the mark. Plot holes and contrivances in the narrative awkwardly stand out. Extremely linear levels with no secrets or extras. Characters like Motoko feel woefully under-utilized.

Final Verdict:
GOOD
Shadow Warrior 3 strips away much of the extra fluff from its predecessor for a short, straightforward thrill ride packed with violence. Its humor doesn't always land and the narrative can be slipshod but the gameplay is very fun and backed by solid level design. Just don't be too surprised at the overall campaign length.
A copy of this game was provided by Developer/Publisher/Distributor/PR Agency for review purposes. Click here to know more about our Reviews Policy.