Mystery and space for this month’s offering.

Another month has already died and gone. The time goes fast, too fast for us mortals, and there never really feels like there’s any time sometimes to really enjoy life with how quickly it goes. But it is what it is, I suppose, but at least there is free games month to month to keep us from thinking about such grim things, and November’s Games with Gold got announced today.

The two headlining entries are the narrative-based mystery title Sherlock Holmes: The Devil’s Daughter on Xbox One, available all throughout November and the Xbox game Star Wars: Jedi Starfighter that will be available from November 1st to 15th. Along with them will be The Final Solution for Xbox One (11/16-12/15) and Joyride Turbo for 360 (11/16-11/30). 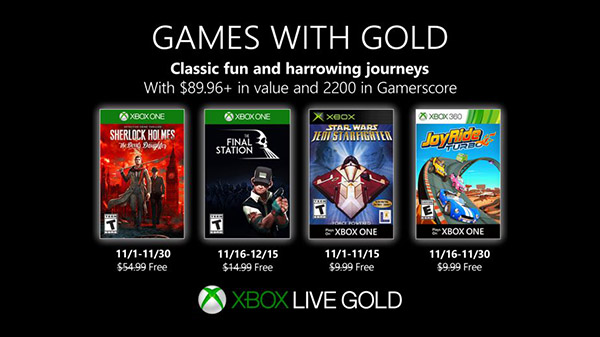