It wouldn’t be an exaggeration to call Skyrim one of the biggest, most beloved, and most influential games ever made. Certainly over the last decade, there aren’t a lot of games that have come close to achieving the sort of rapturous success that Bethesda’s open world action RPG enjoyed, and for all of its many issues (especially the technical ones), it’s not hard to see just why it exploded the way it did. For its part, Bethesda has been taking every chance it gets to get more money out of it over the years, with multiple re-releases on multiple platforms, and a record that’s coming close to rivalling the ridiculous number of time Capcom has re-released Resident Evil 4.

To celebrate Skyrim’s tenth anniversary later this year, Bethesda will be releasing the game once more with a new Anniversary Edition, giving everyone another chance to jump back into the game for the hundredth time and dive into that world once more. And ahead of its imminent launch, here, we’ll talk about some key details that you should know about Skyrim Anniversary Edition.

Just in case you’ve somehow managed to not only avoid ever having played Skyrim to date, but also having learned much about it in the years since its launch, let’s start with a basic introduction of what it is and what you can expect. Bethesda’s open world RPG is set in, well, Skyrim, a land that’s currently in the grips of a furious civil war raging between the native Nords and the Empire whose rule they’re trying to end. But that’s far from the biggest issue being faced by the people of Skyrim. As the game begins, you find yourself headed straight for the chopping block to be executed for your crimes against Skyrim and the Empire- but your execution is cut dramatically short when you and the soldiers you’re with are attacked by a dragon. Dragons are thought to have been extinct for a long, long time, and their return spells imminent disaster for everyone in Skyrim. Luckily, some mysterious powers awake inside you and you emerge as the Dovahkiin, or the Dragonborn, a hero destined to destroy Alduin the World Eater – the ultimate big bad dragon – and save the world.

So what exactly is going to be included in Skyrim Anniversary Edition? A lot, as you’d imagine. For starters, it will include everything that was included in Skyrim Special Edition, which launched for the PS4 and Xbox One back in 2016. That, in turn, includes the base game, as well as all three of the game’s expansions- Dawnguard (which sees you taking on vampires), Hearthfire (which lets you build and customize your own home), and Dragonborn (which takes place on the island of Solstheim and sees players crossing paths with the previous Dragonborn). In addition to all of this, Skyrim Anniversary Edition will also feature various additions and improvements. Lets talk about that now.

Skyrim is one of those games that’s taken on a life of its own. It seems like a game that never ages, that just keeps living on and on- and so much of that is thanks to its incredible modding community on PC. Creation Club was Bethesda’s attempt at bringing that to all platforms, and even though it was significantly more limiting than you’d expect a modding-focused community feature to be, it did give us some good stuff regardless. In Skyrim Anniversary Edition, Bethesda is going to have 74 total creations, 48 of which are being brought over from the current Creation Club, with the remaining 26 being brand-new mods- which, in turn, will combine to make for over 500 new Creation Club elements. This will include new quests, dungeons, activities, bosses, weapons, armour pieces, spells, items, and more. 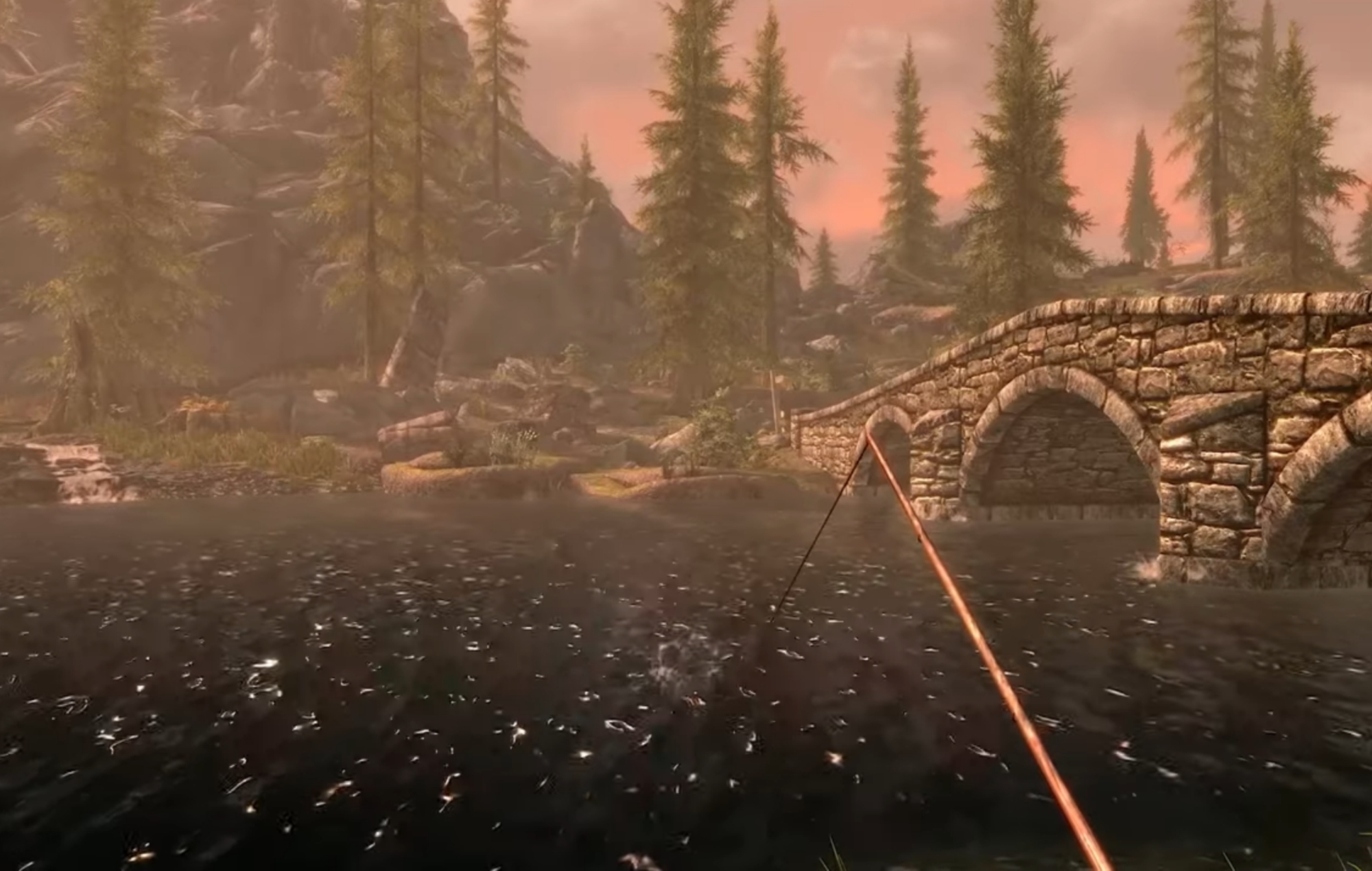 Skyrim is an almost endlessly playable and replayable game, thanks not only to its excellent emergent and systemic sandbox, but also its bevy of engaging content. There’s no shortage of side activities in the game, but Skyrim Anniversary Edition is adding another new one- and a pretty notable one at that. Bethesda has confirmed that the game will now have a fishing minigame as well. It’s a little surprising that Skyrim didn’t have fishing to begin with, but there’s a large contingent of players out there who’ll be adding a healthy chunk of play time to their playthroughs now that a fishing minigame has been added in. Every game is better with a fishing minigame in it, after all.

One of the best and most engaging pieces of new content that Skyrim Anniversary Edition is bringing over from the Creation Club is a new Survival Mode. Like any good Survival mode, it grounds players in the world with some very interesting modifications made. Everything from health to hunger to your body temperature to fatigue have to be kept an eye on and managed constantly in this mode, with a few other handicaps thrown in for good measure as well. You can only level up when you go to sleep, fast travel is locked, your carry weight is reduced, swimming in cold water can be dangerous, you can get diseases and afflictions that then have to be dealt with individually, and more. Survival Modes aren’t everyone’s cup of tea, of course, but those who’re into that sort of an experience will likely find a lot to love here.

Purely from a visuals and technical perspective, Skyrim was quite an outdated game even when it first launched back in 2011, and the Special Edition re-release a few years later didn’t exactly do an awful lot to sand out its rough edges. We’re not expecting Anniversary Edition to be any different, honestly, but Bethesda does say the re-release will feature various technical and visual improvements. The game engine has been improved, and the visuals will have more bells and whistles as well, including screen-scape reflections, volumetric god rays, new shaders for different terrains, dynamic depth of field, and more. Of course, on the newer consoles, you can also expect faster load times, thanks to their SSDs.

Since Microsoft’s acquisition of Bethesda, it’s become pretty clear that major upcoming releases from the latter are going to be exclusive to Xbox and PC, but when it comes to smaller ones like remasters or re-releases, Microsoft is willing to bring its games to other platforms as well- like the recent Quake remaster, for instance. Skyrim Anniversary Edition will be doing that as well, with its launch set for November 11, 2021 on Xbox Series X/S, Xbox One, PS5, and PS4. That’s exactly ten years on from Skyrim’s original launch (and, incidentally, exactly one year ahead of Starfield’s planned 2022 launch).