Karl Fairburne returns for more espionage and sniping on May 26th. Here's what you need to know about his latest mission.

For many years now, Rebellion has been consistently releasing its long running sniping video games, the Sniper Elite series. Now it’s back with Sniper Elite 5 as it releases on May 26th for Xbox One, Xbox Series X/S, PS4, PS5, and PC, and is a step up in numerous ways. Let’s take a look at 15 things you should know before buying.

Series protagonist Karl Fairburne returns once again, fighting in World War 2. However, he eventually finds himself investigating a mysterious Nazi project called Operation Kraken which can apparently turn the war’s tide. To stop the mastermind Abelard Möller, the player must gather intelligence and of course, rack up a kill count on his subordinates. 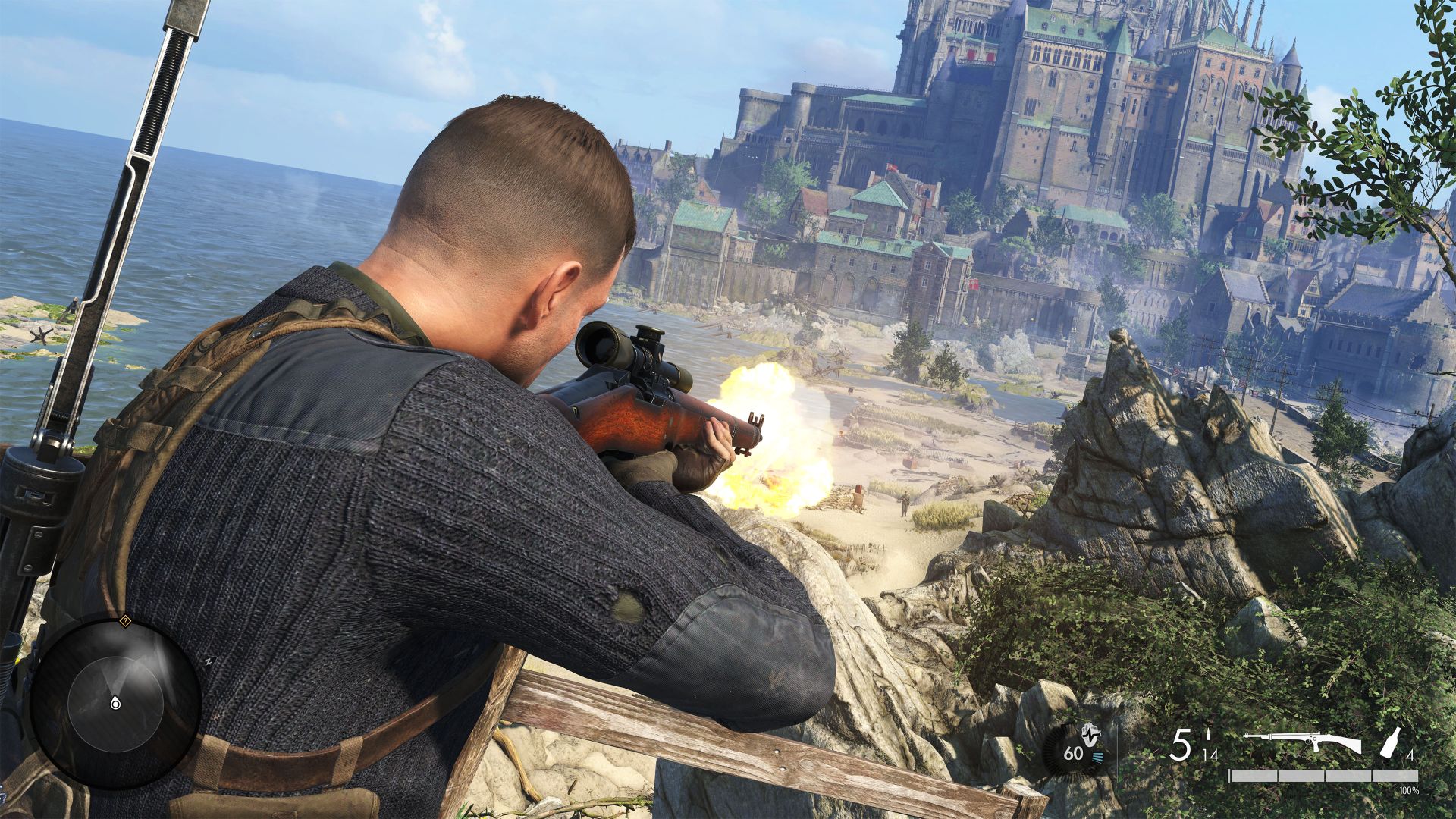 On the surface, Sniper Elite 5’s gameplay loop seems simple enough. You have a sniper rifle – point and shoot from a safe distance. But where the experience really shines is in recreating the nuances of sniping, like taking wind direction and bullet drop-off distance into account. Other factors like noise generated and Karl’s heart rate (which can affect his scoped-in accuracy) must also be accounted for along with environmental objects that can help mask the sound of gunshots.

You’ll want to take down your targets but also escape in one piece, which necessitates some planning. For those who want to be eased in though, there are options for adjusting the AI’s aggressiveness and how much damage Karl can receive. So if you’re keen on some forgiveness or just running and gunning, that’s also an option. 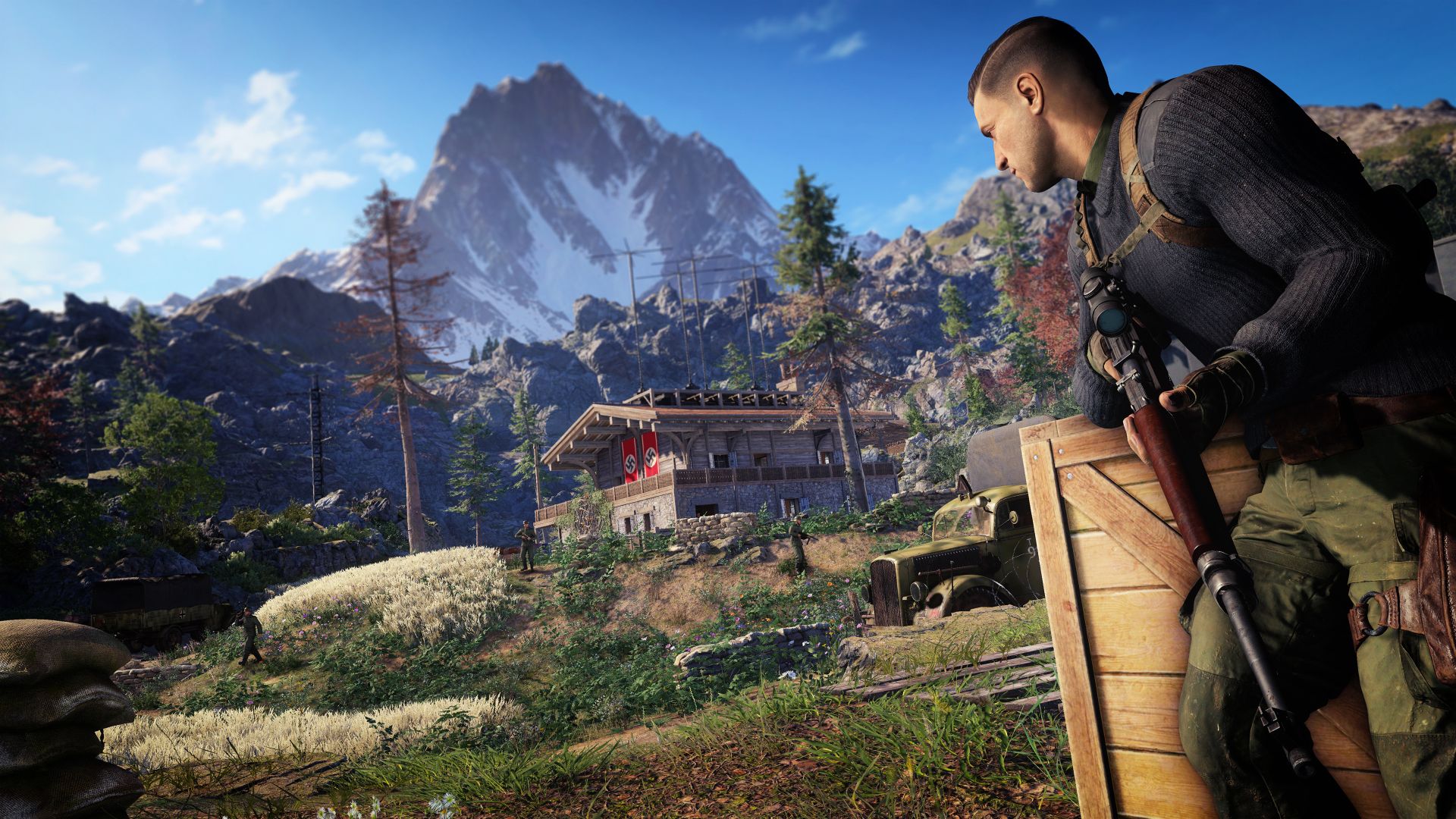 In terms of scale, Rebellion is promising the “largest, most interactive and immersive maps” in the series yet. There are multiple points for infiltration and extraction along with vantage points to secure for sniping. If you’re keen on being sneaky, then there are various spots to hide bodies and avoid detection. Along with core objectives, there are also optional targets to hunt and multiple different routes to take. This lends some replay value as you explore different routes and strategies for assassination.

You don’t have to go it alone in the campaign – there’s two-player co-op support, allowing one more sniper to join you. Co-op mechanics have been improved this time around so you can now share ammunition and items, provide orders to your partner or heal when necessary. A second player is also especially useful when playing with Invasion Mode enabled. 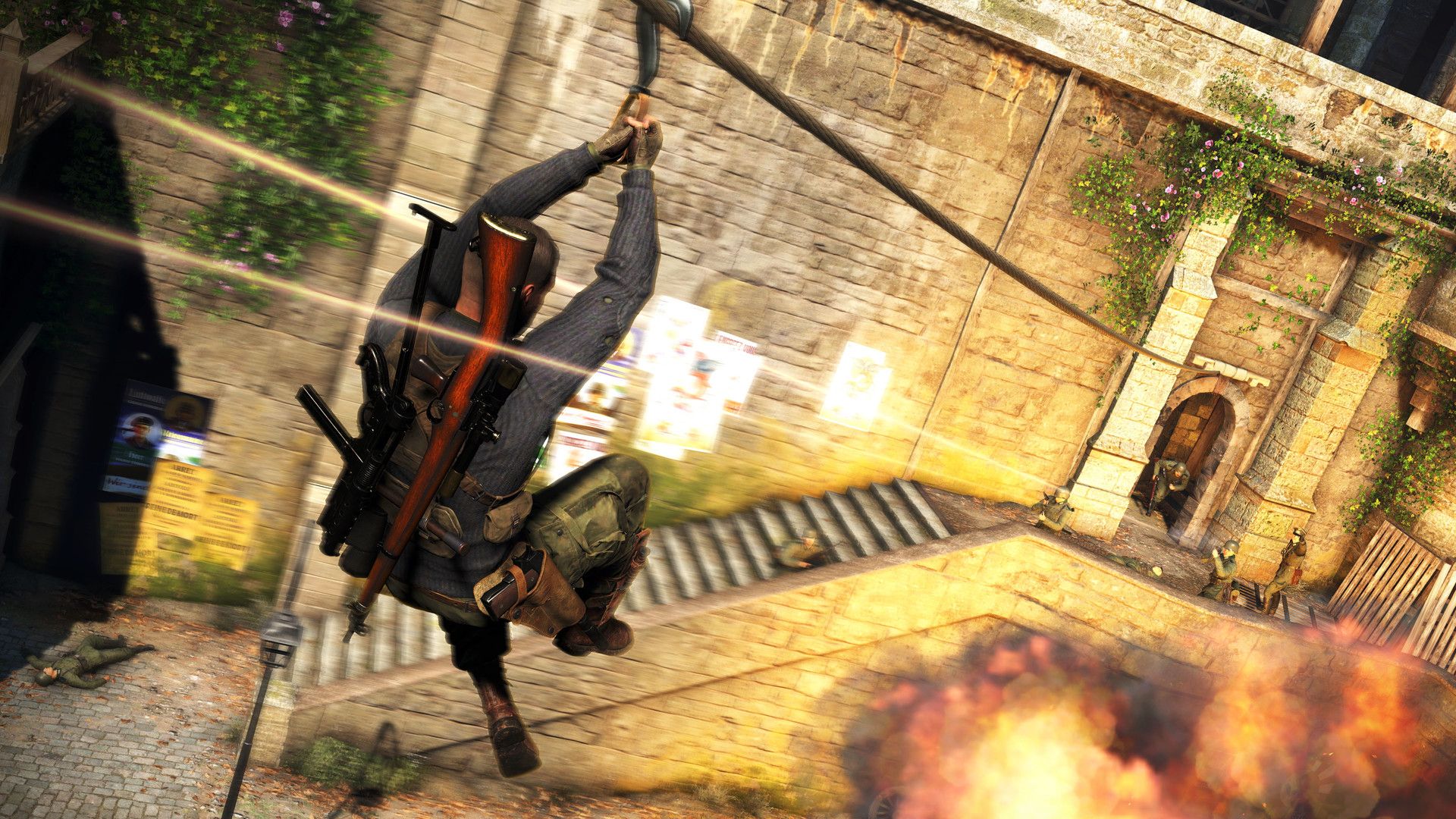 Though Karl’s mobility is still more or less the same, there are more options for traversing one’s environment. Ziplines help in getting from one place to another more quickly and he can also slide down slopes. Some platforming will be required for that ideal sniping spot but now you can also shimmy on ledges to reach them. 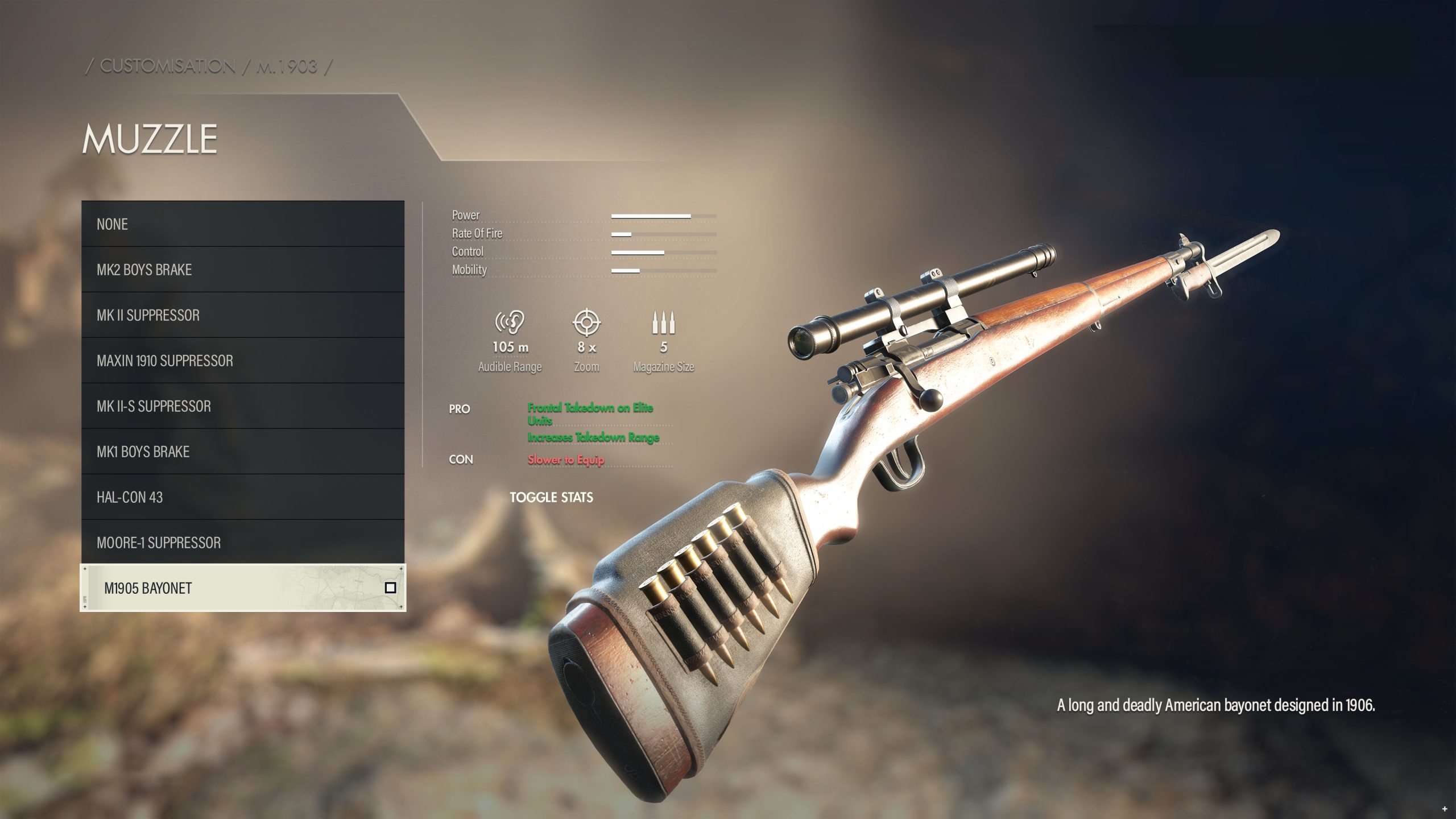 It’s not just the environments where Sniper Elite 5 seeks realism. The weapon customization promises to be its most in-depth yet with options for changing stocks, receivers, barrels, iron sights, scopes, magazines and even a weapon’s materials. As players explore levels, they’ll come across Workbenches which unlock more options (with over 200 in total to be had).

There are four stats to keep in mind – Power, Mobility, Control and Rate of Fire – based on one’s playstyle and you can also equip different types of ammo, from armor piercing to soft-point expanding rounds. Of course, playing stealthy and using suppressors or non-lethal methods (which provide bonus XP) is also encouraged.

Invasion Mode is exactly what it sounds like – when enabled, another player will enter your game as an Axis Sniper and attempt to take you down. They can even rally fellow Axis soldiers in the level to pinpoint your location or tell them to “Stay Sharp”, raising their alertness to potential threats (thus eliminating the element of surprise). Thankfully, the invaded aren’t completely helpless – when an Invader is tagged and then spots the player, their previously known location will be visible on the map. The Allies can also use invasion phones to find the Invader’s last known location though these can also be sabotaged and used against the player.

Both sides can net rewards for eliminating their target in Invasion Mode, like weapon skins, character skins and so on. Invaders will also receive weapons and items while the Allies can receive additional XP. Furthermore, those who seek a greater challenge can try invading co-op games, thus battling against two Allied Snipers at once. 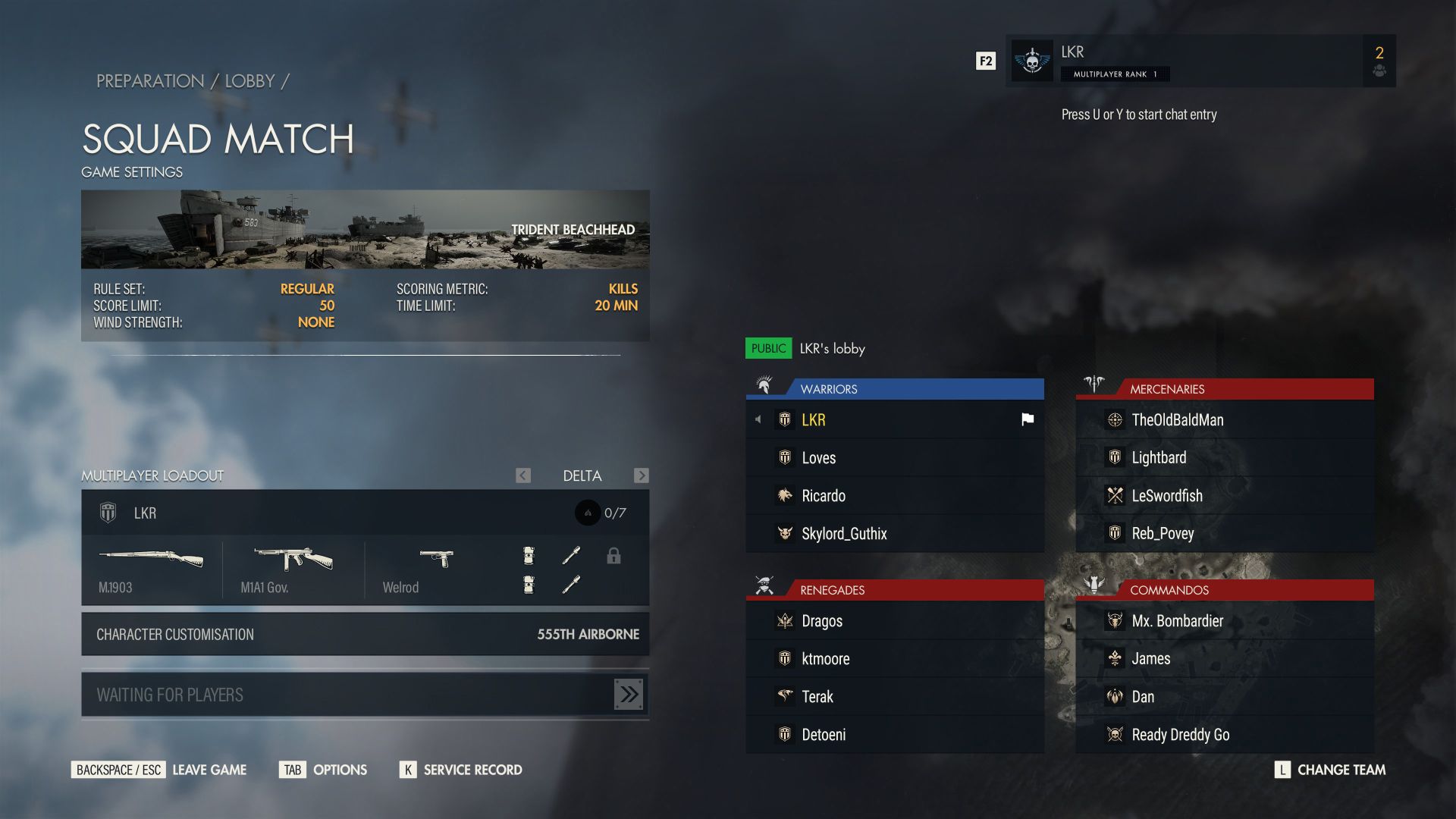 For online multiplayer, previous titles stuck to 6v6. Squad Match is taking things in a slightly different direction. It allows for a maximum of 16 players but divided into four teams of four players each. It’s an interesting dynamic, not unlike some battle royale titles, that encourages team play and communication. Of course, there’s no shrinking ring of death or random loot to scrounge, so don’t worry.

If Squad Mode isn’t your cup of tea, then it’s possible to customize your own online experience. While game modes like Free-For-All, Team Match and No-Cross return, players can adjust the score type (making it based purely on kills or something else), the score cap and time limit for a match. Want a match with no wind strength and risk death at every corner? Have at it. If PvP isn’t your thing, then there’s Survival where up to three players take on waves of AI enemies. 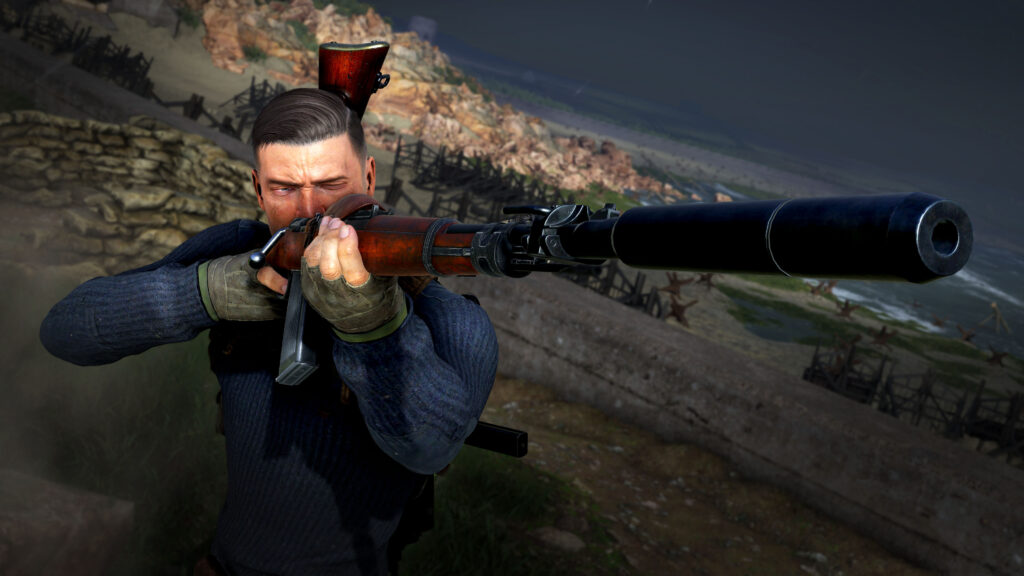 Multiplayer progression has also undergone some much needed changes. Attachments, skins and weapon unlocks now have their own system so you don’t have to play the campaign to make progress. Instead, you’ll need to complete challenges with a weapon to net rewards. There are also five different classes, or more accurately, four different secondary classes with the Sniper always being the default.

There’s the Scout, Medic, Engineer and Assault, and each has exclusive perks that fit different play-styles. Classes can be changed while respawning and upon leveling up, you gain perk points that can be spent to unlock more perks (which are tailored more to each specific class’s style instead of straight buffs to damage or accuracy as per the developer).

Finally, along with new items like the Decoy – which creates a sniper scope glint to fool enemies while tagging anyone who destroys it – there are Supply Drops. These spawn at regular intervals and provide heavy weapons along with tagging enemies in a 50 meter radius. Everyone else will be gunning for them though so you’ll need to risk death for some gain.

Would this be a Sniper Elite title without the gratuitous X-Ray Kill Cam? Sure enough, it returns and is “more realistic and grisly than ever” according to the developer. Not only can you trigger the slow mo gore with SMGs and pistols, bones can now deflect bullets in different ways, causing them to rip through other body parts. It gives a whole new – and uniquely gruesome – meaning to “rip and tear.”

Like its predecessor, Sniper Elite 5 will be receiving post-launch content. Its Season Pass offers access to two new campaign missions, two weapon skin packs, two character skin packs and six new weapon packs. All of this content should be available a la carte as well. Free content updates haven’t been detailed but there should be new maps, difficulty options and more available down the line like its predecessor.

Although the recommended requirements haven’t been revealed at the time of writing this feature, we know the minimum requirements. You would need a Intel CPU Core i3-8100 or equivalent, 8 GB of memory, a DirectX12 capable GPU with 4GB VRAM and 85 GB of space.

Rebellion has confirmed that the game will be fully cross-platform compatible on release. Details like cross-progression, how PC vs. console player match-ups will be handled and so on have yet to be revealed. But with how much it’s leaning into multiplayer, whether it’s the new Squad Match mode, extensive customization options for matches or Invasion, this further expands the player pool. 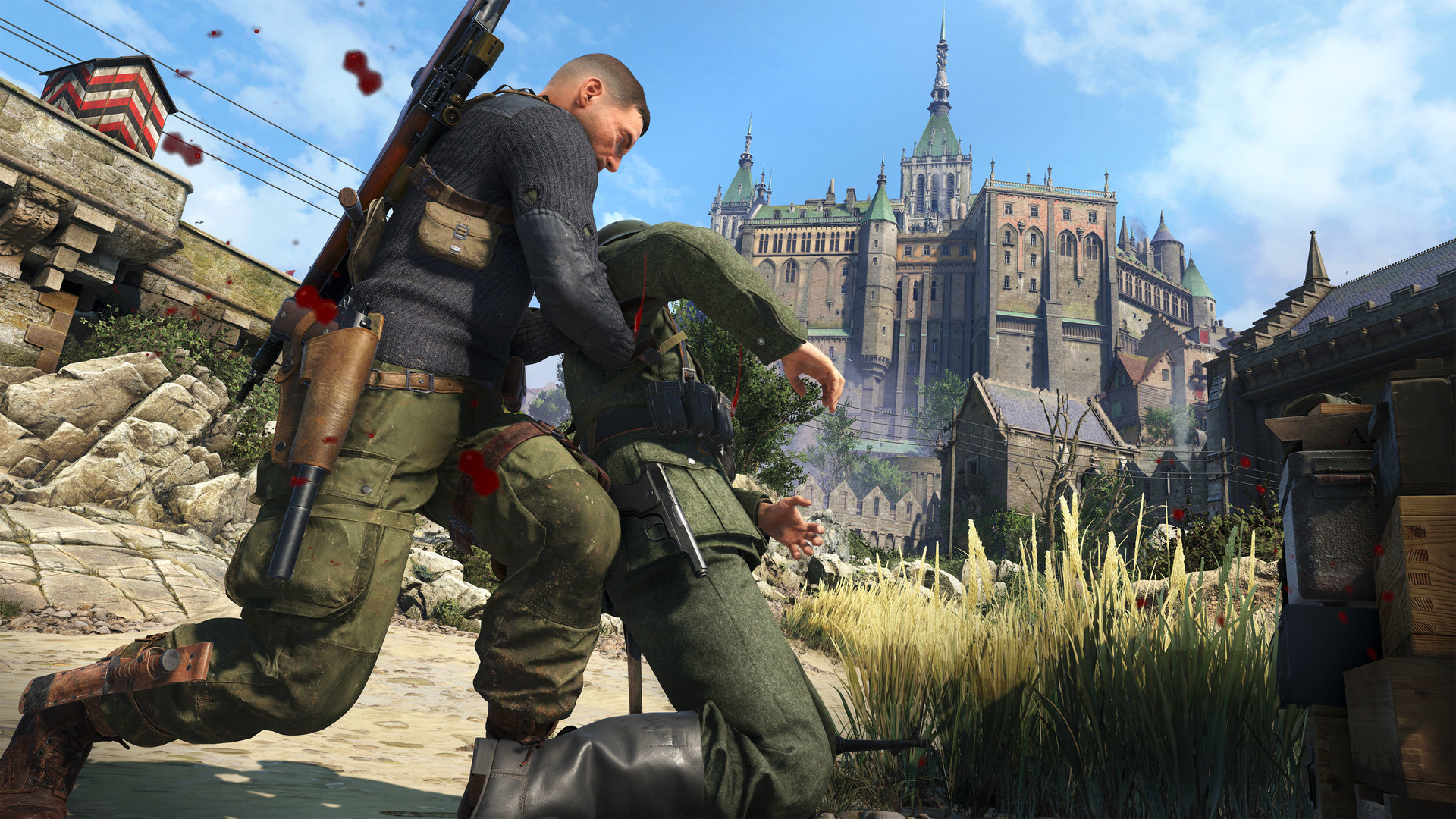 Sniper Elite 5 will be available for Xbox Game Pass on day one. However, this seems to be for PC only. This is based on the announcement from The Game Awards 2021 when PC Game Pass received its rebranding and Sniper Elite 5 was revealed as one of its major titles. Again, we’ll need to wait for more details but since Sniper Elite 4 is available for consoles and PC, it wouldn’t be strange for its successor to follow.