Heart Machine's black hole odyssey is full of mysteries, gorgeous visuals and solid gameplay even with its share of drawbacks.

Beginning with a trip down the proverbial rabbit hole, Solar Ash is many shades of fast-paced 3D platforming, from casual exploration to precise timing and obstacle course bosses. It seemingly channels Jack Vance’s The Dying Earth with its fragmented lands and dilapidated architecture, almost following the passage “A million cities have lifted towers, have fallen to dust. In place of the old peoples a few thousand strange souls live” to a tee. For all of its despair and post-apocalyptic ruination, its atmosphere is also heavy on adventure fantasy with quirky characters and an enthusiastic protagonist.

In a nut-shell, the story is about Rei, a void-runner who’s trying to save her planet. It’s currently in the pull of the Ultravoid and slowly disintegrating but her people have a plan. Implanting a contraption called the Starseed into the Ultravoid, the idea is to calibrate it and collapse the black hole, thus saving their planet in the process. However, upon entering the Ultravoid, the Starseed is found to be offline, its conduits blocked by signals emanating from massive bosses called the Remnants, and her companion Cyd suffering from memory loss.

"Initially, Solar Ash’s pacing feels at odds with its story set-up. Despite being thrust immediately into the Ultravoid, it takes a bit to get going, familiarizing players with the mechanics and how battles with the Remnants work."

What happened to the other void-runners and who is the mysterious Echo that seemingly holds a vendetta against Rei? It’s up to the player to clear the conduits of black gunk and take down the Remnants to bring the Starseed back online. As so often happens though, things aren’t quite as straightforward as they seem.

Initially, Solar Ash’s pacing feels at odds with its story set-up. Despite being thrust immediately into the Ultravoid, it takes a bit to get going, familiarizing players with the mechanics and how battles with the Remnants work. In between, one is caught up in exposition regarding the void-runners, the Starseed, Cyd, and Rei’s own musings. Over time, it settles into a more comfortable groove, with the ethereal visuals and stellar synth-wave tunes setting a solitary mood.

This isn’t a purely visual story – all characters are fully voiced and the core plot doesn’t leave too much up to the player to figure out on their own – but telltale signs of Heart Machine’s environmental story-telling are apparent throughout. Venturing to the Broken Capital showcases the Veruki and their failed battle against…something (with an aggrieved stranger named Lyris thinking she’s still in the conflict).

In contrast to this is the Eternal Garden, home to the easily frightened Ahrric who must commune with the Elders but is hesitant for some reason. Each level has its own intriguing side quest chains along with void-runner caches that talk about what happened to Rei’s friends. The latter not only provides contexts for events leading up to her arrival but different suits with unique benefits as well (like shorter cooldown on dashes and Time Slips). 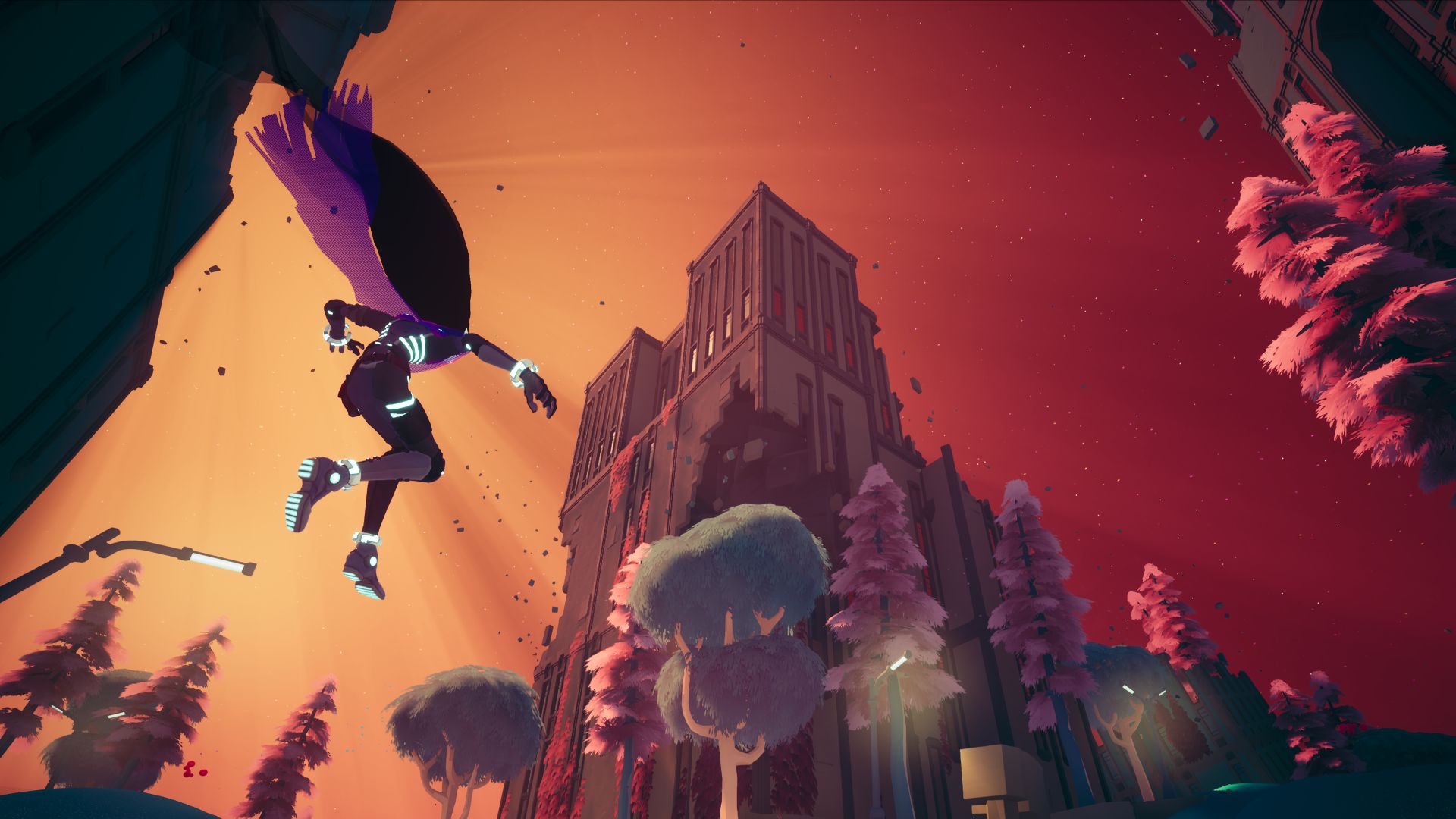 "The core of Solar Ash is its platforming. Rei is capable of skating around in environments with the ability to dash, attack enemies with a light construct sword without losing speed, and grind on rails."

Throughout all of this, the tone seemingly shifts like the various structures adrift in the neon clouds. Rei is more or less the anchor in all of this – a fish out of water in this eternal sea (a babelfish at that, since everyone all speaks one language). On the whole, she’s likable enough, providing observations and gameplay suggestions when exploring.

However, seeing her act tough and persevering one minute, and parkouring with glee in another can be a little jarring. Some rough lines, like “Thing’s tough, but I’m tougher” also fall a bit flat during the tense moments. The voice acting as a whole is good enough – certain characters will likely resonate more than others, though I would have liked to see their stories more entwined with one’s objective to take down the Remnants (though they do become more important near the end-game).

The core of Solar Ash is its platforming. Rei is capable of skating around in environments with the ability to dash, attack enemies with a light construct sword without losing speed, and grind on rails. She can also grapple to specific points and use Time Slip to briefly slow down time. Using Grapple in conjunction with Time Slip allows for grappling across much greater distances along with propelling Rei towards enemies.

The mechanics are fairly straightforward and the controls extremely responsive. The momentum feels just right, adding that extra bit of challenge to precise platforming without becoming frustrating. It’s the level design that really leverages all of Rei’s movement abilities in interesting ways. The Broken Capital is all about grinding and hopping between rails to traverse massive buildings. While the Eternal Garden is similar, it introduces mechanics like mushrooms that create rails based on the direction they’re hit, spores that must be gathered to activate rails and open gates, and so on. 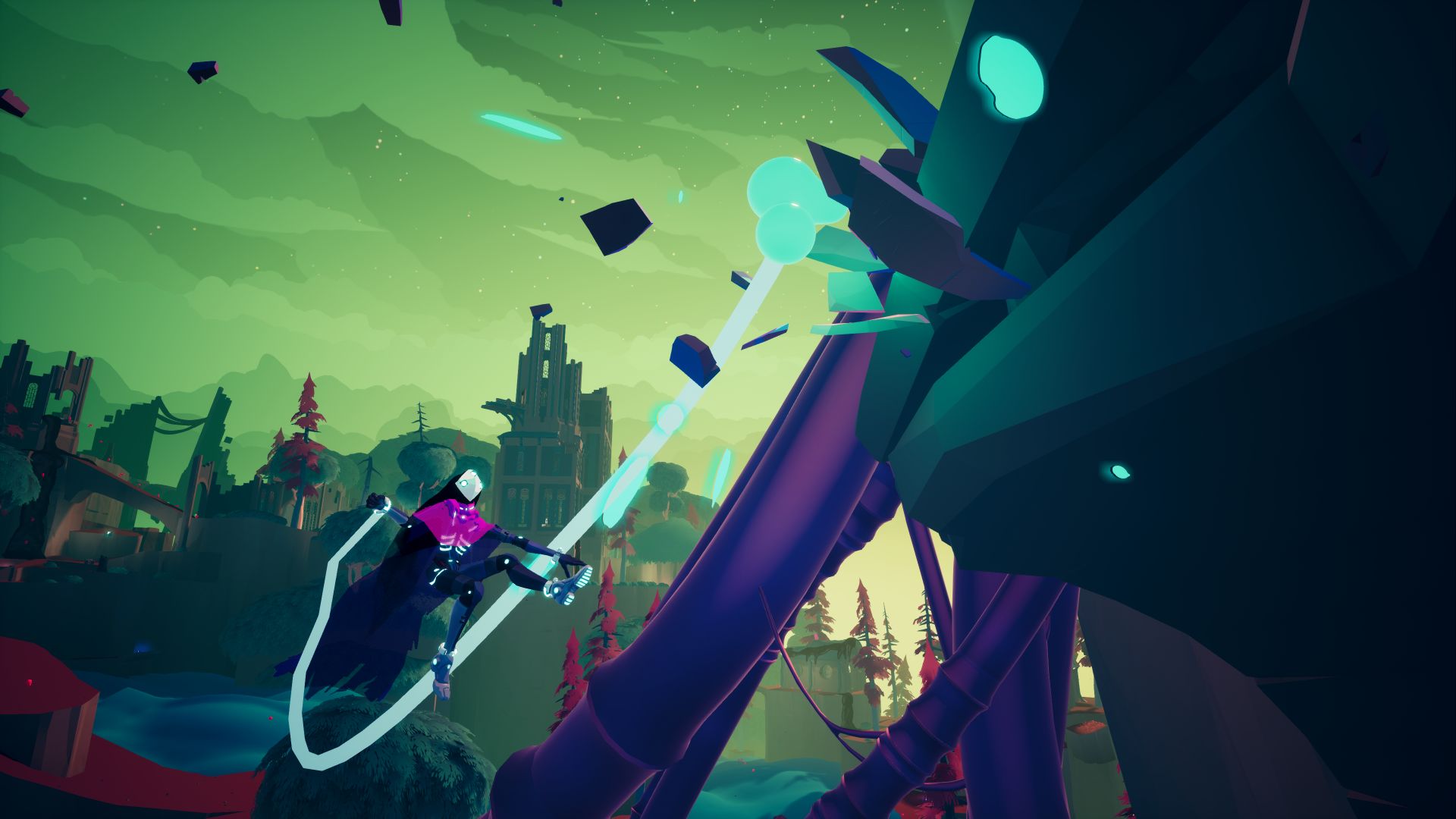 "With the exception of two bosses, the only real danger to Rei is beating the timer to hit the next pressure point, lest the black ooze on the Remnant kills her."

Each level also has a number of different markers where a black gunk has congregated – they must be cleared out to awaken and battle the Remnant. These are essentially timed challenges where Rei must destroy specific pressure points in order to clear the gunk. All in all, the progression between levels feels natural, building on the player’s knowledge while upping the challenge in interesting – and mostly fair – ways.

The one exception is perhaps the Mirrorsea where stepping into the acidic water fills up a toxicity meter. If you’re still standing in it at that point, you immediately die. So when having to traverse massive bodies of this toxic water, seeing the meter fill up, even when not in the water, can make for some annoying deaths (not to mention that checkpoint placement could be better in some places).

Once a Remnant is awakened, Rei must scale its body, destroying pressure points to expose and attack its weak point. As a Remnant gets weaker, the black ooze encompassing its body will glow red while its shell dissipates further, making it tougher to traverse without dying. Though fairly epic, most of the Remnants feel somewhat passive. With the exception of two bosses, the only real danger to Rei is beating the timer to hit the next pressure point, lest the black ooze on the Remnant kills her. 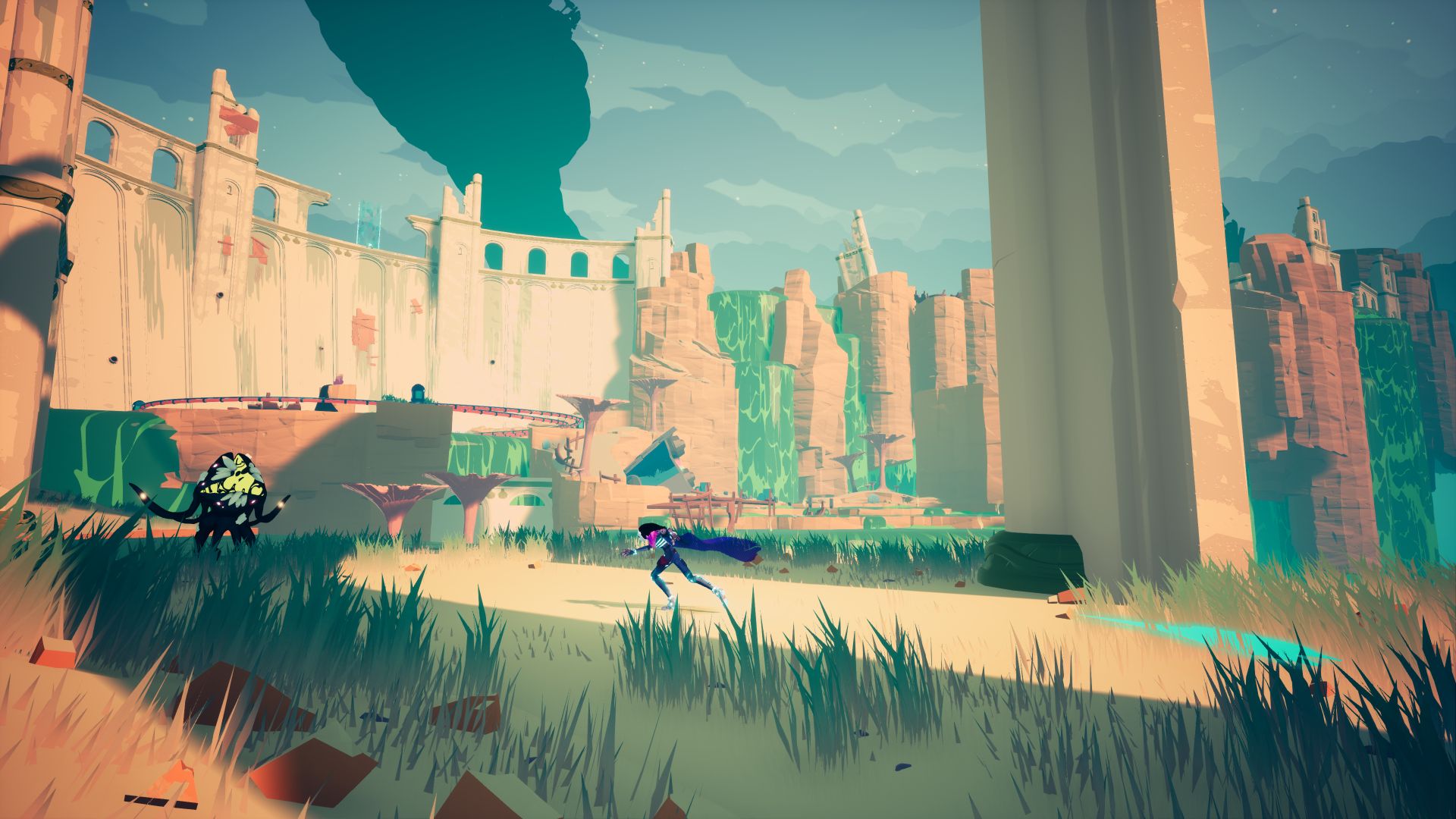 "Given Heart Machine’s pedigree with combat, it may be surprising to hear that Solar Ash’s combat is so simple."

Don’t get me wrong – these sequences can be fairly enjoyable. I just wish that they were a bit more threatening (though perhaps playing on higher difficulties will alleviate that). It also would have been nice to see the environments having more of a role in these fights. In many cases, it’s simply about locating a grappling spot and then traversing the Remnant’s massive frame towards the weak point. Perhaps the limited environmental interaction is to reinforce the fast-paced nature of these battles. At the end of the day, it’s a different approach to boss design and works for what the game is trying to achieve, even if it can feel a bit one-note at times.

Given Heart Machine’s pedigree with combat, it may be surprising to hear that Solar Ash’s combat is so simple. Regular enemy design is fairly rudimentary with the usual smaller fry, the tankier charging foes, flying enemies and so on. There isn’t much by way of combos or special abilities – you’re either hacking and slashing or utilizing speed to dodge attacks and retaliating (though using Time Slip to nullify the recovery time on combos is nice).

On the one hand, I can understand why it’s like this – it works pretty well when you’re grinding on rails and grappling across gaps. But on the other hand, combat kind of feels unnecessary in many places, especially when the main source of Plasma – which is used to upgrade shield capacity – comes mostly from exploring and destroying red crystals. 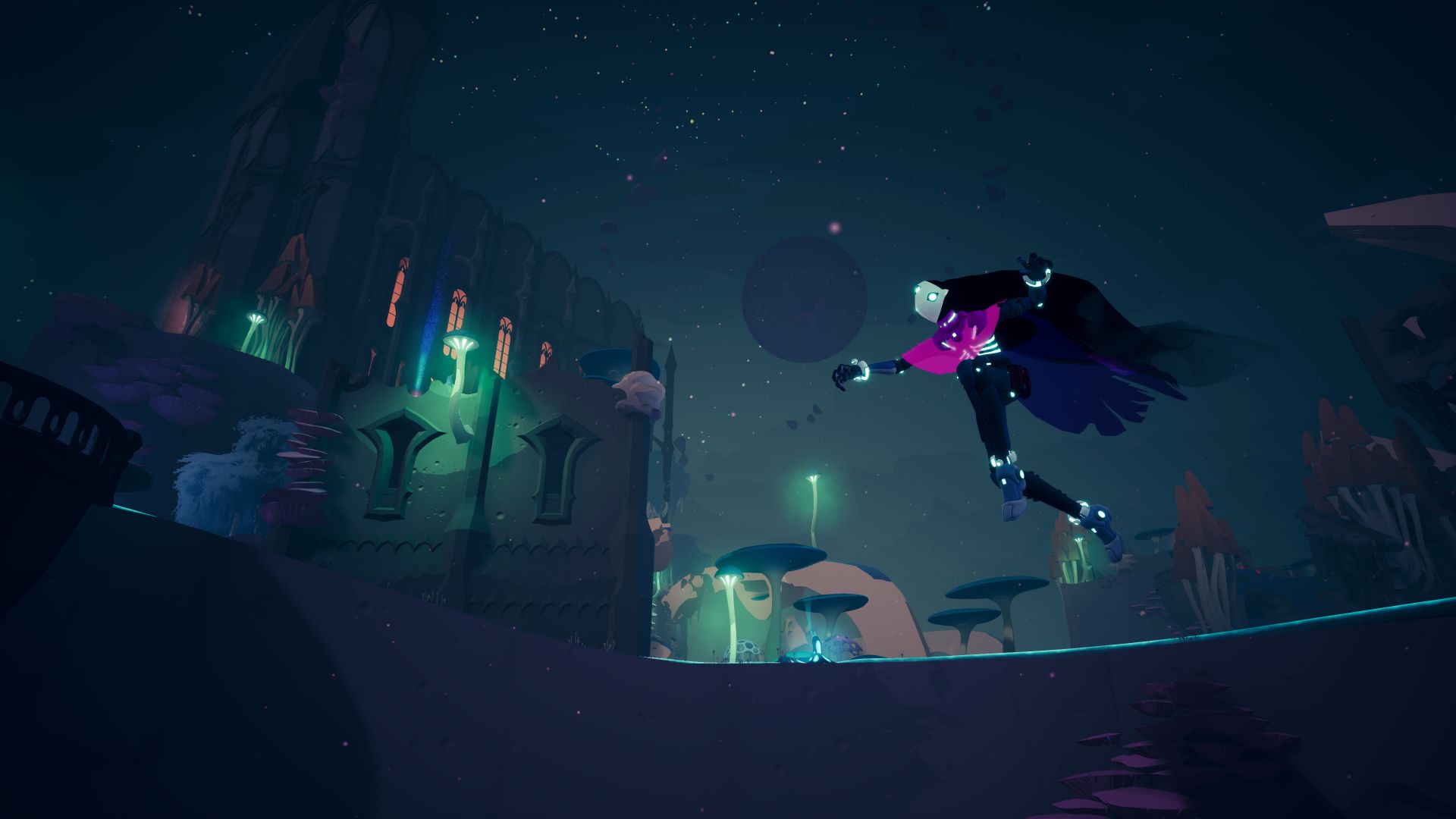 "It’s not a long journey and while the whole isn’t overwhelmingly better than the sum of its parts, there’s enough to its story, lore and gameplay to warrant gazing into the abyss."

Presentation-wise, you really can’t under-sell how gorgeous the game looks or how its somber music vibes so well with its ruined beauty. Each area feels imaginative and distinct while conveying different purposes, whether it’s the ruins of a civilization fighting to the death or a massive ship surrounded by floating wreckage.

Performance is solid on PS5 overall even as the frame rate drops occur every so often (though there is a day one patch so improvements are to be expected) – this is likely due to the sheer scale and draw distance in levels. I had one soft crash where Rei became stuck and unable to move in the Landing Site, which necessitated quitting and restarting the game but it was easy to jump right back in thanks to the auto-save system. Otherwise, the experience is fairly well polished overall.

Solar Ash is an oddity, no less so than Hyper Light Drifter; it harbors a unique soul that’s unlike anything currently available while still remaining approachable and enjoyable. It’s not a long journey and while the whole isn’t overwhelmingly better than the sum of its parts, there’s enough to its story, lore and gameplay to warrant gazing into the abyss.

Some performance issues, particularly with the frame rate. Rei is a decent protagonist but feels somewhat uneven (mostly due to some iffy lines and tonal shifts). Some Remnants feel like passive obstacle courses instead of aggressive threats. Combat, as a whole, is fairly average.

Final Verdict:
GOOD
Even with some rough edges, Heart Machine's latest is an endearing 3D platformer with its own unique hooks, carried by some strong lore, level design and aesthetics.
A copy of this game was provided by Developer/Publisher/Distributor/PR Agency for review purposes. Click here to know more about our Reviews Policy.