Games on Steam are also being sold at higher prices.

Okay, so here’s something very interesting (and potentially scandalous). The South African PlayStation Store is selling a number of games for twice the amount that they’re being sold for on the Xbox Store in South Africa, while many of these games are also being sold for higher prices on Steam (though not quite as high as PSN).

This comes from a report over at GameZone, who have compiled a list of games that have been priced quite irregularly on PSN and Steam. For instance, Darksiders 3 (which was quite recently confirmed for a November 2017 release) is being sold for R599 (South African Rand) on Xbox Store, while the exact same version (Standard Edition) of the exact same game is being sold on the PlayStation Store for R929. Meanwhile, Steam is also selling the game for more than what it’s being sold for on the Xbox Store, at R769.

None of these are sale prices either, just in case you’re wondering. They’re all the actual, listed prices for these games. But here’s the thing- none of these seem to be an error in price listing either. Because when GameZone reached out to PlayStation South Africa on Twitter to inquire about these prices, their response was “The application of pricing on the PlayStation Store is unfortunately not directly in our control. Pricing is managed by Sony Interactive Entertainment.”

So does that mean Sony is purposefully and knowingly charging consumers extra money, sometimes even almost as much as double? Or is Microsoft just charging less money- which, by the way, doesn’t make any sense at all. Whichever it is, PS4 owners are really being taken for a ride over in South Africa. Having to pay R350 more for a recently released game like Jurassic World Evolution, for instance, when Xbox One owners can get it for much cheaper is just ridiculous. 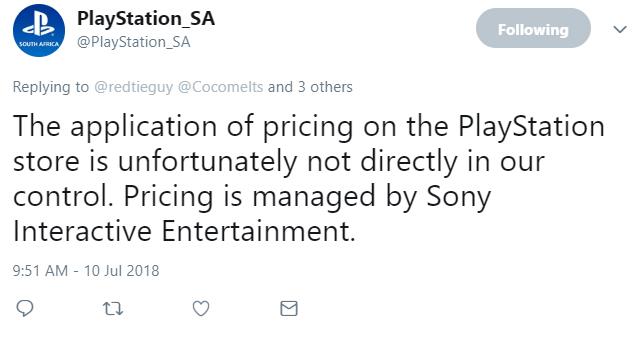