Spider-Man: New Information Seems To Hint At Another New Villain

The super-strong supervillain Tombstone might be featured in the game.

The upcoming Spider-Man has already been making all the right waves, with its excellent gameplay showing at E3, not to mention a trailer that confirmed not one, but four new villains for the game- Scorpio, Rhino, Vulture, and Electro. That’s on top off the already confirmed Mister Negative, along with a sixth major villain who remains unnamed as of yet.

However, information released for the game may be hinting at yet another villain to be included in the game- more specifically, the supervillain Tombstone. Sony recently tweeted out a mock-up of the Daily Bugle, the popular newspaper from the Spider-Man universe, which contained newspaper articles that seemed to be hinting at several details in the game.

One of the articles (which you can view below) mentions a rage-inducing drug that’s been flooding the streets called Grave Dust- which sounds very Tombstone-y, if you ask me. On top of that, the person pictured in the image has a “T” emblazoned onto his shirt. Tombstone is a vampire-like supervillain from the Spider-Man comics- he has superhuman strength and speed, razor sharp teeth and nails (which he filed himself), and is highly sensitive to sunlight (though he doesn’t actually do any blood-sucking).

He is also highly resistant to physical damage and injuries, boasts incredibly heightened senses, and has also trained himself to become an expert at both, marksmanship and hand-to-hand combat. With all that in mind, he should definitely be an interesting addition to the rogues gallery of Insomniac’s Spider-Man. 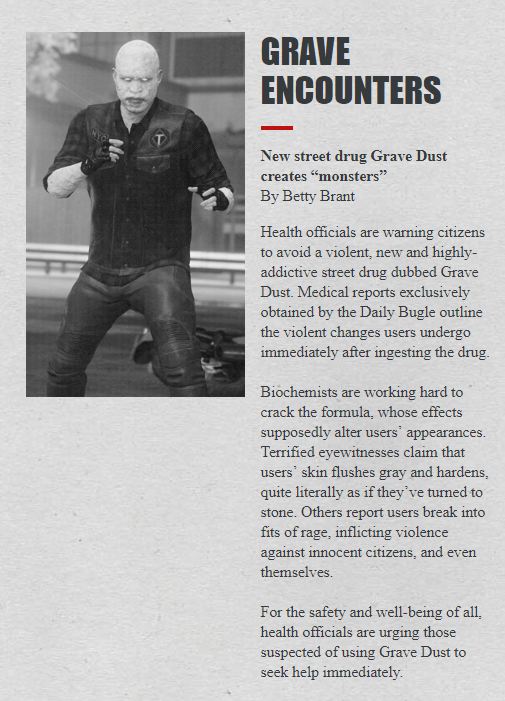