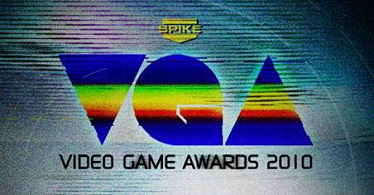 Worldwide Event Will Include More Exclusive World Premieres Than Ever Before
Of The Most Anticipated Titles Of 2011 And Beyond, Including “Batman: Arkham City,”
BioWare’s Next Blockbuster Title And Academy Award-Nominated
Director Guillermo del Toro’s First Gaming Franchise From THQ

Show To Be Directed By Hamish Hamilton And Produced By Done and Dusted Inc.

Here is the full press release for your viewing pleasure straight from Spike TV:

New York, NY, November 17, 2010 – Spike TV today announced the nominees, categories and two world premieres for the 2010 “Video Game Awards” – the network’s annual live televised event to celebrate the best in games.  The eighth annual “VGAs” will be a global event, broadcasting in over 175 territories and countries around the world and gathering some of the most notable names in video games, Hollywood, music, sports and more to honor the outstanding achievements within the video game industry over the past year.  The two-hour event, taking place in Los Angeles, CA, will premiere LIVE on Spike TV Saturday, Dec. 11 at 8 p.m. ET/5 p.m. PT.

The 2010 “Video Game Awards” will feature global premieres of some of the most anticipated upcoming games, as well as unannounced titles, from some of the industry’s leading publishers.  This year, viewers will get an exclusive preview of “Batman: Arkham City,” where one of Batman’s deepest secrets will be revealed.  “Batman: Arkham City,” also a nominee for Most Anticipated Game, is the sequel to 2009 multiplatform blockbuster action-adventure hit “Batman: Arkham Asylum.”  Additionally, the next blockbuster title from acclaimed developer and Studio of the Year nominee, BioWare, will be unveiled at the show.  Acclaimed film director and Academy Award-Nominee Guillermo del Toro will unveil his upcoming video game franchise from THQ.

“This year more than ever, video games dominate the brave new world of entertainment.  We’ll honor the year’s best in gaming, as well as give gamers a look into their future with more world premieres than ever before,” said Casey Patterson, executive producer and senior vice president, event production, Spike TV.  “We’re incredibly excited about our partnership with Done and Dusted and Hamish Hamilton.  They have a bold vision for the show and how to use technology to present the games in a way we’ve never seen before on TV.”

For additional information about other “VGA” world exclusives and announcements, fans can log onto VGA.Spike.Com and get updates via Twitter @SPIKE_TV as well as the hashtag #VGA.

Nominees for Spike TV’s 2010 “Video Game Awards” were determined by the VGA Advisory Council, made up of a group of some of the most well-respected video game journalists from media outlets such as Entertainment Weekly, USA Today, Kotaku, GameSpot, IGN, Game Informer Magazine, Penny Arcade, Joystiq and WIRED.  Games released between November 25, 2009 and November 23, 2010 were eligible for nomination.

Following are several of the nominees and categories for Spike TV’s 2010 “Video Game Awards.”  For a full list, please go to VGA.Spike.Com.

Done and Dusted Inc. is one of the world’s premiere festival, awards, music and events staging and filming specialists.  With offices in London, New York and Los Angeles, their teams have created highly original, compelling events and programming from all corners of the globe.  The company was founded by Hamish Hamilton, Ian Stewart and Simon Pizey, who have been involved in some of the world’s biggest television events including “The Oscars,” “Super Bowl Halftime Show,” “The MTV VMA’s” and “EMA’s,” “The Brit Awards,” “The Laureus World Sports Awards” and “The Victoria’s Secret Fashion Show.”

Spike TV is available in 98.6 million homes and is a division of MTV Networks.  A unit of Viacom (NYSE: VIA, VIA.B), MTV Networks is one of the world’s leading creators of programming and content across all media platforms. Spike TV’s Internet address is www.spike.com.