Spyro: Reignited Trilogy is a loving update that is strongly recommended for fans and newcomers alike.

Insomniac’s Spyro the Dragon trilogy of platforming adventures on the original PlayStation has held up marvellously well, as any fan of those games will tell you. Unlike other platformers of the era on the console, Spyro seemed to hew most closely to the collectathon template that platformers on the Nintendo 64 established, and that other platformers since have followed to this day. The result is that the games have always structurally felt modern, and aged far better.

All of this is, of course, leading to the assertion that you could just as well play the PlayStation original games, and completely be fine with what would be a solid, if a bit janky, outing. However, in the vein of Crash Bandicoot N.Sane Trilogy last year, Activision has now taken the Spyro trilogy, and updated it wholesale for the current generation of consoles. Spyro: Reignited Trilogy was handled by Toys for Bob, who were also behind the Skylanders series, which in turn originally began as a Spyro spin-off.

Their familiarity with the license, and their reverence for the source material permeates every frame of the experience with Spyro. Calling this collection a remaster is not doing it justice—this is more akin to a remake, designed to live up to Spyro as we remember, not Spyro as it was. Every frame of the game is bursting with color, whimsy, and life, and the game in general seems to be far closer to the striking art of the original series than the PlayStation could ever have hoped to render. The strong art is backed by modern rendering techniques, which means Reignited Trilogy wouldn’t look out of place next to other current generation games, and some liberal reinterpretations involved to make the games look and come across even better than the original titles did. 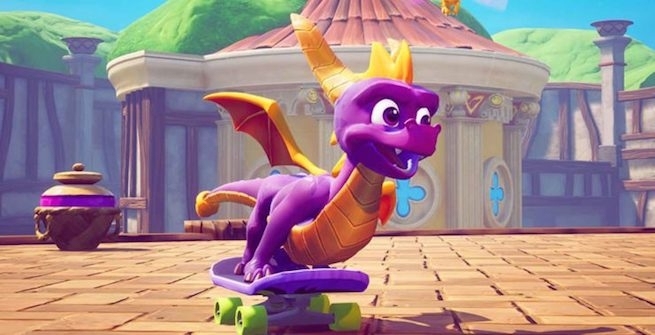 "As thorough the visual overhaul of the games is, however, Toys for Bob have had the sense to not touch the actual gameplay here. Spyro plays exactly as you remember, from the movement to the jumping, gliding, hovering, charging, and more. The physics of the momentum and inertia are all there, and the source material here has been dealt the most delicate touch possible."

For instance, the first Spyro game has a unique design for every single dragon that you must rescue—it’s such a small detail, since there are so many of them, but it impresses the personality of each unique one upon you, the player, and sells the whimsical world of the game further. Similarly, enemies and NPCs now have delightful animations that emphasize their personalities further.

As thorough the visual overhaul of the games is, however, Toys for Bob have had the sense to not touch the actual gameplay here. Spyro plays exactly as you remember, from the movement to the jumping, gliding, hovering, charging, and more. The physics of the momentum and inertia are all there, and the source material here has been dealt the most delicate touch possible. On the whole, this is a good thing—as mentioned, the titles hold up remarkably well, and messing with the physics can cause fans and purists to take umbrage, which will not happen here. In some cases, however, it can also lead to problems, such as with the game’s camera, which is a hopeless exercise in frustration (both, the manual camera and the automatic one cannot keep up with the action, and get in the way far more often than they actually properly frame the action).

The actual levels here are exactly as you remember, structurally. Graphically, of course, they come to life like never before, teeming with color and a distinct sense of identity, as already noted. However, the actual layout and design has not been tampered with in the slightest. This is a surprisingly good decision. Even though the levels, which felt gigantic in 1998 (and onwards) are mere minutes long tromps today, they’re expertly designed, perfectly tuned to Spyro’s moveset, as well as the unique gimmick of the level that you are currently playing. They also lend themselves well to curiosity—there’s always a critical path for you to take, and you can follow that and rush to the end of the stage if you want. However, players who go out of the way will find their curiousity amply rewarded, and those who return to earlier stages later on will find more layers unveiled still.

"Whether you are a newcomer or a true blue fan of Spyro who grew up on his originals adventures, there is very little to complain about with Reignited Trilogy. It’s an incredible package all around, with three very strong games that hold up marvellously, are instantly satisfying to play, and look and sound wonderful."

In terms of actually acting as a loving tribute to the original games, then, Reignited Trilogy cannot be beaten. Visually, the games are resplendent now, and look as they should, rather than they do. In terms of the audio, the original soundtrack has been retained (and you can switch to it whenever you like), but also included is an updated score, with light instrumentation added to lend the sound with more depth and soul. I personally enjoy the new tracks far more; however, those more attached to the original tracks will have the option to switch back, so there should be no complaints there, either. And, as mentioned, the games play really well, too. While there are some problems that belie their age, like the camera, the level design and strong mechanics hold up fantastically well, and have not been messed with at all.

What’s more interesting is how they hold up as a new package. If, for instance, you have never played the original Spyro games, but want to check them out, how recommended is this package compared to other similar games you can buy for your money? And the answer is, this is a proposition that is hard to beat. You’ve probably already caught on that the games hold up well mechanically as well as structurally. Indeed, they are very satisfying to play, and newer and less experienced players will find them as gratifying as veteran players will find them full of layers to unpeel. Graphically and musically, they’ve been touched up. And even in terms of their simple premise, and to the point storytelling, they hold up very well—arguably better than several modern games, even family ones, which spend far too long pontificating, contextualizing, and tutorializing before you can actually jump into the action. No, 30 seconds of a quick setup is all you get here, and then you’re playing right away. There’s something to be said for how immediate these games are, and for parents looking to buy something for their children, there is probably nothing better than these on the PS4 and Xbox One currently. They have strong design and an immediate feedback loop. Plus, they have some of the trademark Insomniac wit and charm that would go on to define their later games, such as Ratchet and Clank, in later years.

Whether you are a newcomer or a true blue fan of Spyro who grew up on his originals adventures, there is very little to complain about with Reignited Trilogy. It’s an incredible package all around, with three very strong games that hold up marvellously, are instantly satisfying to play, and look and sound wonderful. At $40 for three very long, very good games, there’s literally no reason not to go out and buy these games right away.

The updated graphics look gorgeous and striking; thorough overhaul makes the games look closer to what the originals were intended to look like, rather than what they DO look like; the new sountrack is great, but you get the option to switch back to the original; level design and controls have not been messed with; the original games have aged great, and feel satisfying and gratifying to play for veterans and newcomers alike; fantastic value

Some relics of its age show, such as a very frustrating camera that cannot keep up with the action

Final Verdict:
AMAZING
Style and substance make Spyro: Reignited Trilogy an incredibly compelling package, for fans and newcomers alike.
A copy of this game was provided by Developer/Publisher/Distributor/PR Agency for review purposes. Click here to know more about our Reviews Policy.